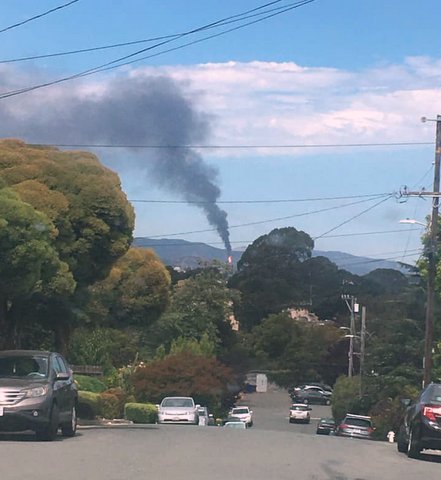 19 Aug “Chevron Is On Fire” Again. Change Is Long Overdue.

Posted at 12:30h in Commentary, Health by Danielle Parenteau-Decker 1 Comment

“Hey, I think Chevron is on fire right now” — the words I dreaded to hear. I hoped it wasn’t true, but it was. I could see the bright orange and red flames shoot straight into the sky from one of the smokestacks at the refineries unit followed by ginormous plumes of black smoke shooting higher and traveling south with the winds.

I heard those words in a phone call from a co-worker who was working outside on the rows of produce at our farm in North Richmond while I was doing work inside our office at 11:41 a.m. on Aug. 14. My immediate response was to run outside to make sure all of them went inside where it was safe and sheltered in place until further notice. I made phone call after phone call to family and friends to tell them to do the same. By this time, it had been 20 minutes. Not once did the actual warning sign go off to signal the city to shelter in place.

After a couple of tries, I finally got through to an operator from the Bay Area Air Quality Management District to make a complaint about the fire and the toxins spewing in the air, so they could send an investigator to check what the problem was. An hour later, I got a call from the investigator telling me they were still waiting for it to be safe enough to check the problem. I asked if they could call me back because I had questions that I wanted answered. I was told to keep my phone nearby for when they had more information but did not receive a call.

It was just the eighth anniversary of the huge Aug. 6, 2012, Chevron fire that sent 15,000 residents, myself included, to the hospital. It was a moment that forever changed my life, not just with the trauma but also by giving me the clarity to see that corporations such as Chevron would do everything in their power to protect their industries. It taught me to not sit in silence, but to speak up and help make a change for myself, my community, our planet and those yet to be born.

After the flaring went down, Chevron Richmond released the following statement:

“This morning at approximately 11:20 a.m., the Chevron Richmond Refinery experienced flaring activity due to an upset at a process unit. Our workforce quickly worked to resolve the issue and flaring is currently stopped. As we continue to make adjustments, intermittent flaring is possible. Due to the visibility of smoke, a Community Warning System (CWS) Level 1 was issued to keep residents informed. Level 1 is one of the lowest on the CWS scale.

“Flaring is an important part of keeping the Refinery running safely. Flares are a safety device used in refineries to relieve pressure during the refining processes and help keep our equipment and plants operating safely. Members of the community can visit https://www.richmondairmonitoring.org/ to view real-time air quality data.”

It is unfortunate this was only ranked a Level 1 issue because that meant Chevron felt no need to notify the community about the bad air quality occurring in the middle of the day. Or to provide a follow up tweet or notification to inform us about what was burning or why the smoke was black.

The fossil fuel industry was made aware at least as far back as the 1960s that if it continued production at the same rate, it would play a huge role in climate change. In 1968, the Stanford Research Institute warned the American Petroleum Institute, the largest trade association for the oil and natural gas industry, about the dangers of burning fossil fuels.

The oil companies kept silent, however, and, along with other industries, continued damaging practices, leaving us to pay the price while they profit. But community members who want a healthier future that doesn’t depend on energy sources that are slowly killing us are keeping the pressure on these industries.

Earlier this month, the Mercury News reported that Marathon Petroleum would close its Martinez refinery “and begin laying off its 740 employees in October, canceling contracts that provide temporary employment to between 250 and 2,500 people at any given time.”

The move was caused in part by a drop in car use due to the pandemic, which has prompted other oil companies with local refineries to make changes as well. “Chevron has said it made changes to its refineries in response to the lower demand for oil” but not specified what that means for its Richmond plant, wrote Annie Sciacca for the Mercury.

It is good that these dirty refineries are finally starting to decrease their production levels and even shut down, but it should not have taken a pandemic to make that happen. The 2012 fire was just one of many warnings that the industry has chosen to ignore.

Here we are, five months into this pandemic, struggling to raise awareness about how important it is to sanitize, wear masks and practice safe distancing, and on top of that, we still have to deal with the fossil fuel industry trying to continue business as usual. At the very beginning of the pandemic, wise elders told me that this moment in history is Earth again putting us on timeout so she can heal herself. When we disobey Earth’s rules, it causes problems for the planet but even more for humanity.