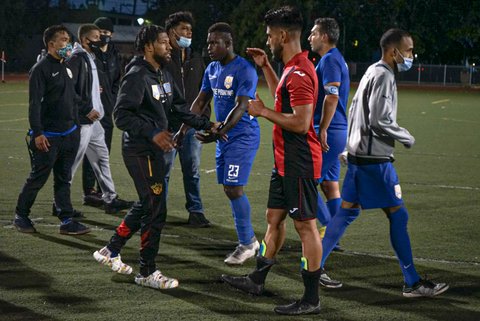 Posted at 16:42h in Sports by Danielle Parenteau-Decker 0 Comments

Story and photo by Denis Perez-Bravo

“Every time you face a close rival, there is an extra factor added,” Richmond Sol head coach Manuel Martinez said.

Both teams showed talent in a very competitive atmosphere.

“It was a very good game,” Martinez said.

San Pablo took an early lead as forward Refugio Garcia scored off a pass from midfielder Luis Lopez on the right wing. With a defender on his left, and Richmond Sol goalie Joseph Ventura approaching in the front, Garcia chipped the ball over the goalie and scored the first goal in the eighth minute.

Around the 20th minute, Ventura was injured when he collided with an SPFC player. He was taken out and Sol’s third goalie, Ivan Garcia, came in for the rest of the game.

San Pablo kept the slim 1-0 lead until Richmond midfielder Jordan Flechero passed it to himself after he flipped the ball over multiple defenders inside the goal box and then scored on a header.

“It came out beauty,” he said.

Richmond had strong plays, but they weren’t able to finish. The first goal they scored set the tone for what came next, Flechero said.

In the 47th minute, during stoppage time, forward Carlos Gabriel Pecanha crossed a ball from the left side of the San Pablo goal box to the center of the box where Richmond forward Eduardo De Loa Jr. scored on a header, taking a 2-1 lead just before the half.

Despite the heightened momentum of two straight goals, Richmond was unable to put another ball into the net. And San Pablo kept pressure until they were able to tie.

“We don’t wake up till we are down,” San Pablo FC defender Juan Alejandre Jr. said.

And with San Pablo still down by one, Alejandre was granted a freekick opportunity. He scored from outside the box to tie the game, 2-2.

“The second goal was to get back and keep playing. Us, we are not happy with a tie,” he said.

San Pablo’s Lopez had the last goal opportunity in a one-on-one against Garcia but missed the shot as the referee blew the final whistle.