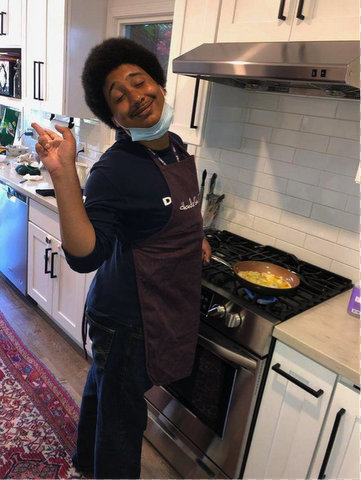 12 Jul Cooking Matters Spices up a New Generation of Chefs

Posted at 12:14h in Food, Youth by Danielle Parenteau-Decker 0 Comments

It is an inscrutable truth that if you desire to live in this world, you must eat. It is just a question of “what?” The “what” may be fast and convenient dining or the simple delicacy of homemade cuisine.

Before fast food became a major thing in the 1950s, most food in America was home cooked from scratch — meaning if you wanted something sophisticated like a cake, Mom had to get all the raw ingredients herself in order to bake. There were some “fast” restaurants around like White Castle (established in 1921), but according to Christina Pirello of onegreenplanet.org, “it wasn’t until after World War II that we began the journey to becoming a fast-food nation.”

McDonald’s was founded in 1940, but the business really took off after the war. Fast forward to 1951 when “McDonald’s grossed $275,000, an unheard of amount of money for any small restaurant at the time.” In other words, this was the beginning of a “Golden Age” of fast food.

As many other restaurants opened,fast food made a name for itself and became its own industry. In the ’90s, “fast food had taken over the American landscape with 11,800 McDonald’s, 6,298 Burger Kings and 3,721 Wendy’s,” Pirello writes. “Today, more than 160,000 fast-food restaurants feed more than 50 million Americans each and every day, generating sales of more than $110 billion dollars annually.”

In other words, more Americans are eating out than ever before.

He goes on to say that social media plays a part in this finding.

“Fifty-three percent of the 13,000 diners surveyed browsed food photos on social media, with 75% of these diners picking a place to eat out based on the photos,” Chang writes, referring to a 2018 Zagat dining trends survey.

If you can make food look better than what the common person could make, then that is a guaranteed sale, it seems. I think judging on photos alone is a good way to miss out on great meals. You run the risk of missing out on some lesser known brands/restaurants. Variety is the spice of life.

Why is that? Well, adding on to what Chang said about social media, even TV may play a part in this. Yoon implies that shows like “Iron Chef” can make people expect cooking to be an art form rather than what it is — making something to eat.

Don’t try to replicate everything you see on TV. I mean, food is food. Not everyone has the capacity to make the artsy stuff those TV chefs do. Not only that, but I am sure those chefs have gone to specific schools so they can make killer meals like those in the first place.

Seriously, if you are a marvelous chef, that is great. But if you can’t make a swan out of ice cream or whatever, DO NOT beat yourself up over it. That type of content is for your entertainment, NOT to emulate. The more you cook, the better you will get. Take it from me: I’m happy with the fact I can decently fry chicken without screwing that up.

So you might be thinking, “OK, reporter man, you’re telling me all this stuff about cooking this, cooking that, what exactly is your point?” Well, I used to dislike cooking simply because every time I attempted to cook something, it tasted … meh. Not outstanding like my mother’s, just decent (if I can even call it that). I only know a handful of dishes like macaroni, noodles, fried/grilled chicken and hamburgers. Doesn’t help that I am a typical college student either; I’m broke as a joke, yo.

In April, I heard about this virtual cooking class by the name of “Cooking Matters.” Needless to say, I was interested in making my own cooking better. I mean, eating out all the time was taking a HUGE toll on my wallet. I figured, If I could cook better, I would NOT need to eat out or get food delivered to my house for like $10 so often. So I applied and decided to give the classes a whirl. The first class was in mid-May. That was around the time school ended, so I could finish my semester and learn how to cook better right after.

I finished my finals two or so days before the first meeting of my cooking class. I totally freaked out because I thought I had to pay for the ingredients we were going to cook. But lo and behold, someone knocked on my door, and I look outside, and there’s a bag right on my porch. They delivered the ingredients right to me. I let out a sigh of relief and waited for the first day of class to come.

The day comes, and nerves and doubt start to cloud my mind. I can’t explain why. All these worries were NOT in my head a few days before, so why was I having these thoughts? Thoughts like, “Oh, crap, I’m going to screw up and make myself look like a fool”; “What if I am too slow for this class?”; “What if cooking, ultimately, just is not for me?” filled my mind, clouding my ability to be comfortable with myself.

I pressed on, however, and waited for the class to begin at 3 p.m. I remember it being 2:43 or something like that. What was supposed to be a typical 15 minutes felt like an eternity.

Once it actually became time to begin, and I joined the virtual classroom, things mellowed out. I’m so used to the typical college schedule where we basically had to beat ourselves up mentally to keep up that I am embarrassed to say I subconsciously expected every class to be like that.

I was amazed at how kind and friendly my teachers were. They taught me how to actually make food that isn’t microwavable or, well, for lack of a better word… cheap. This class had me grating cheese, cutting vegetables and using ingredients I had no idea even existed. In the first class, I made mac and cheese with broccoli. It was so much fun actually being able to cook the things I enjoyed eating from restaurants, and the best part? It is absolutely free.

If you want to give cooking a try, then you should definitely check out Cooking Matters. The classes as a whole are headed by the nonprofit cooking school 18 Reasons, which has been active in San Francisco since 2011. It also has another course called the 18th Street Kitchen, but it costs. The students’ entry fees are used to fund the Cooking Matters classes.

According to its website, 18 Reasons wants to “empower the community with the confidence and creativity needed to buy, cook, and eat good food.” One of my teachers, Francesca Boulton, 29, also said it uses “the power of food to create community.”

Currently, 18 Reasons works with the city and the West Contra Costa Unified School District to help make sure students are able to obtain affordable healthy food. Its Cooking Matters courses are offered all over the nation. If possible, why not give it a try? Maybe cooking is something you may be good at, and even if it isn’t, you might enjoy it as a hobby.

To learn more and see how you can get involved, visit 18reasons.org.