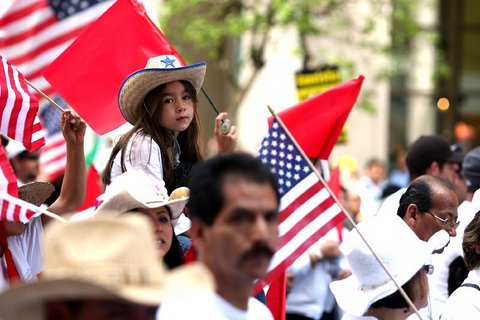 Posted at 10:28h in National by Danielle Parenteau-Decker 0 Comments

The Hispanic/Latino population increased by about 23% both in the U.S. and Contra Costa County. (“Somebody’s Little Girl” by Thomas Hawk via Flickr under CC BY-NC 2.0 license.)

The U.S. Census Bureau released detailed population statistics that provide key insights into the demographics across the country and will be used to make major changes that affect voting and more.

Notably, that data revealed that the population has become less white and more diverse. Compared with the prior census, the number of U.S. residents who identify as white only decreased. That has never happened before. Other major racial and ethnic groups, on the other hand, saw their numbers increase.

The bureau made this information available to the public Thursday but said in a virtual press conference that it was also working to make it more accessible.

“In order to provide this critical data to all 50 states, the District of Columbia and Puerto Rico as soon as possible, we are providing data in two releases. It’s the same data, just in different formats,” said Nicholas Jones, director and senior advisor of race and ethnic research and outreach in the Census Bureau’s population division.

According to Jones, the first release came in the traditional “legacy” format that the bureau has used for the past two decades. This particular format typically contains larger sets of data and is available on the bureau’s file transfer protocol site where users can download the information directly.

Jones added that the exact same data will be released by Sept. 30 in a more “user-friendly format” on data.census.gov and that the bureau will simultaneously send DVDs and flash drives with the data to state and local officials with software that will help them easily extract the information they need for redistricting.

Releasing the redistricting data sets is a crucial part of understanding the changes in the demographics of the nation, according to Dr. Ron Jarmin, the bureau’s acting director.

“This data plays an important role in our democracy and also begins to illuminate how the local and demographic makeup of our nation has changed over the last decade,” Jarmin said, adding that the pandemic caused a delay in confirming the accuracy of the information the bureau gathered.

Information from the 2020 census shows that since 2000, population increases have steadied around the country, especially in areas that once were growing at a rapid pace such as the South.

“The slowdown in population growth this past decade is evident,” said Marc Perry, senior demographer in the Census Bureau’s population division. “There are fewer states in the highest growth category, more states growing slowly and three states — West Virginia, Mississippi and Illinois — along with Puerto Rico declined in population. Most states in the West continue to be in the fastest growth category, but this is no longer true in the South.”

As the New York Times reported, however, “the growth that did occur — an increase of about 23 million people — was made up entirely of people who identified as Hispanic, Asian, Black and more than one race.”

These findings could have a major impact for many years to come.

Significantly, population data is used in determining voting districts, which, historically, have often been purposely drawn to keep certain people in or out of power.

But that’s not all.

“Results for the 2020 census will be used for the next 10 years to shape the future of our country,” Jarmin said. “Local leaders can use this data to make decisions such as where to build roads and hospitals as well as how to help our nation recover from the pandemic. These results will also help inform how hundreds of billions of dollars in federal funds will be distributed each year nationwide.”

Locally, Contra Costa County’s population has increased by 10%, bringing it up to 1,165,927, and “become increasingly diverse and multiracial,” according to a county press release.

Across the county as a whole, people of color make up a significant majority as people who are white alone account for 43% of residents — down from 58.6% in 2010. That is representative of a larger trend as the white population decreased by 24% in California and 8.6% in the U.S.

Additionally, the proportion of people who identified themselves as Hispanic or Latino increased by 23% in the U.S., 11.2% in California and 23.2% in Contra Costa County.

Those increases do not come as much of a surprise.

The bureau said the increased diversity seen around the country could be explained, in part, by changes to how it asked about race and ethnicity. The 2020 census asked two separate questions — one about Hispanic or Latino origin and one about race — as part of improvements that the agency said “enabled a more thorough and accurate depiction of how people self-identify.”

Last year, the Pew Research Center reported that a majority of Americans would be concerned if the data unique to them were made public, but it said most also trust the Census Bureau to protect their personal information from unauthorized users.

The 2020 census is the first to use differential privacy — a mathematical framework used to disguise the exact information from the data published — to increase privacy protections for individuals.

“Because the redistricting data have rich demographic characteristics available for very small areas such as census blocks, it is essential that we take steps to protect the confidentiality of individuals in our published statistics,” Jarmin said. “This sophisticated framework … protects individual information while letting us share important statistics about communities.”