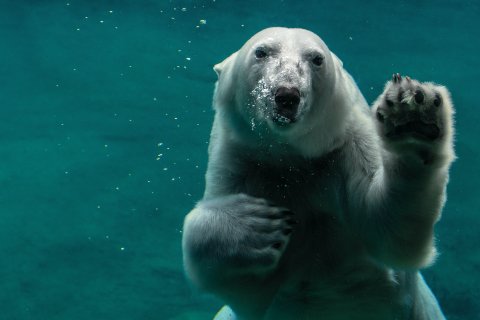 19 Aug As Climate Change Worsens, ‘We Have No Future’

“Think of the polar bears,” say corporations that want to shift the responsibility for climate change onto regular people. (Peter Neumann via Unsplash)

Editor’s note: The United Nations’ Intergovernmental Panel on Climate Change in August released the first part of its Sixth Assessment Report, which examines “new scientific evidence relevant for a world whose climate system is rapidly changing, overwhelmingly due to human influence.” In light of that, we asked three of our young contributors to reflect on the climate crisis.

Every day for the last nine years, I’ve paid attention to the climate crisis we’ve brought onto the Earth. Thanks to technology and social media, the destruction of many ecosystems and the extinction of many wild animals have always been readily broadcast.

To say that we are at a point of no return is an understatement. We’ve already reached the end. Our lives will change drastically. Everything we’re so comfortable with is destroying the Earth.

Working-class people aren’t really to blame. It’s the meat industry. The thousands of acres used to feed our overgrowing population. The resources we’ve sucked from the Earth. The corporations that tell people who are struggling, “Turn off your water if you aren’t using it. Ride the bus for your commute to work. Turn off your lights. Reduce your carbon footprint. Think of the polar bears.”

The world’s richest 10% have carbon footprints 60 times higher than the poorest 10%. When will the people devastating the Earth be held accountable? When will we realize the wrongs of the rich and that they shouldn’t be glamorized for their part destroying ecosystems and wildlife? It breaks my heart to see the rich travel to space when they’ve destroyed the one planet they inhabit. The fascination with space will be the destruction of Earth.

We’re so advanced as a nation, aren’t we? We only had to wait till the last second to try and get everyone’s attention. We wait and wait until it’s our homes that have been burned down. What world will our grandchildren live in?

I’m tired of hearing about the working class having to do everything to stop this climate crisis when all it would take is just one billionaire to fix it. Money solves everything in this capitalist economy, but the rich aren’t doing a single thing about it. I used to dream of fields of life where green was always in sight, where the wind didn’t carry ash and the water didn’t carry mercury.

The world I was born into is no longer. I feel for every person who came to realize we might not ever see the world we were told about as children. I feel for every helpless animal whose world will surely end in fire or water. I feel for newborns who will witness a burning planet. When I look back on my childhood, I mostly see green, but I also see smog. The climate crisis isn’t new; scientists warned of global warming in the 19th century.

I’m not a know-it-all young man blaming everyone but myself; I am an angry human being concerned about the destruction of the planet that has given us all life. I’m tired of having to live in a world where we have to suffer the repercussions of the people who have enough money to stop the problems they’ve caused.

This world is not disposable, but our lives are treated like they’re disposable. I’m more than infuriated. What are we working for? What are we putting our health on the line for? What future are we working 40 hours a week for? A burning, drowning world crying for solution? I fear my anger will sizzle out along with the last tree on Earth. I used to dream about swimming in the ocean, and now as I picture it, I’d come out of the water covered in oil from a busted pipeline. I used to dream of flowers and butterflies, but now I see floods and ash.

The new IPCC report revealed just how extremely humans have jeopardized the health of the planet. Calling it a “code red for humanity,” the IPCC cited many areas where the Earth’s temperatures will continue to rise beyond point of no return. A portion of the report rephrased older verbiage to include “human-induced climate change” as the main threat to the environment. As daunting as this information is, it seems like we’ve heard this all before.

Revising the outdated language of the document does not do much. It does not tell us how we can start working towards effective climate policies.

Environmental activist Greta Thunberg said, “We can still avoid the worst consequences, but not if we continue like today, and not without treating the crisis like a crisis.”

It’s true governments haven’t taken these issues as seriously as they should. The United States and European Union are working towards net zero emissions by 2050 and are expected to reach their halfway marks in 2030. The report stresses that “global warming of 1.5°C and 2°C will be exceeded during the 21st century unless deep reductions in carbon dioxide (CO2) and other greenhouse gas emissions occur in the coming decades.” Even if this goal were met, our planet would still have experienced extreme weather patterns, heat, fires and drought. With rising sea levels, the San Francisco Bay Area is expected to be met with more coastal flooding, erosion and property damage as a result. According to SF Weekly, a six-foot increase would put 30 San Francisco wastewater treatment plants at risk of flooding and could create toxic sewage leaks.

I’m starting to doubt we will see radical changes in time, and I am almost certain that if it happens, these policy changes will not take place until the climate situation is too far gone.

Seeing the impact of the U.S. government’s late response to COVID-19 in 2020 and feeble attempts to address anti-vaccination misinformation, I fear that American society will be met with similar attitudes as our climate situation becomes more dire. Even as temperatures rise year after year and weather conditions worsen throughout the world, there are those who still argue that new findings in science are not as frightening as they seem and that conditions aren’t as bad as we think. Denying the state of the world for one’s own agenda or for profit is unethical and especially disappointing.

As a person in her 20s, I am living in a time where more young people are having these conversations with friends and family about the state of the planet. According to Pew Research, “Gen Zers and Millennials are talking more about the need for action on climate change.” I can think of five separate occasions this week alone where I’ve discussed climate change and our future with friends.

I often wonder if I’ll live into old age considering our current situation. What gives me hope is that through it all, humans persist and if we were the ones to get ourselves into this situation, we can figure out a way to minimize the impact. I am positive this report will inspire more people to take action.

The recent report revealed that we are in extremely dangerous territory regarding climate change. We are steadily reaching the point of no return, and as a college student who doesn’t even have the cash to buy his own car, it is extremely frustrating.

Climate change is more than just global warming; it is not just getting hotter every year. Climate change is much more than that; it is environmental disasters happening on a recurring basis. Natural disasters that are supposed to be once in a lifetime events — or even rarer — have become common. Extreme heat waves that are only supposed to happen every 50 years are happening once every decade now. That’s right, extreme heat waves are going to happen once every 10 years now. They have a release date.

Reuters, citing the IPCC, said we have already locked ourselves in on some of the effects of climate change, but we can prevent the most worrying aspects if we as humanity actually band together in an effort to combat this enemy, which admittedly may never happen because we live in societies that value greed above all else. As long as those in power and wealth sweep information under the rug, we may ultimately perish for some suit’s wealth. For all we know, that “space race” everyone was super into recently may have been a prelude to all the billionaires of the world colonizing other planets, leaving us all to die.

Again, it is possible we can pull through and get through climate change (or at least the most harmful parts). But the report says temperatures have already gone up 1.1 degrees Celsius — something “unequivocally caused by human activities.” And temperatures will raise still even if emissions go down because, paradoxically, the same pollutants contributing to global warming also reflect away some of the sun’s heat.

That’s right, the Earth is so polluted it would even get worse when we are not polluting it anymore. It is indeed a dire situation, and I will admit I am feeling quite pessimistic about humanity’s ability to fix it, not because we don’t have the tools but because we are seemingly only motivated by money. Oil companies such as Exxon knew the type of damage they do to our world decades ago, yet they kept it hush-hush, for example.

As a college student nearly done with his studies I can definitely say that this, along with the COVID pandemic, is one of the absolute worst group projects I have ever had the displeasure of working on. As long as people value greed over their fellow man, we have no future.