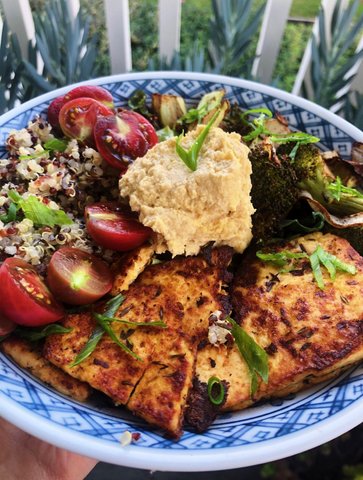 02 Dec My Journey to Becoming Vegan

Food is central to our identities. It shapes how we socialize, practice religion and celebrate. Food tells a story about who we are and even about our personal values. For some, food is a big deal because it changes how you interact with the world.

My journey into veganism was never something I saw coming, but it has changed my life forever. This journey starts with two cultures in love with meat and dairy.

I grew up in a biracial household where both my Swiss and Filipina identities were reflected in the food I ate. Every Christmas morning, my family would gather at my grandparents’ house where my Filipino grandpa would make us all arroz caldo, or rice soup. It is often made with chicken. Breakfast was accompanied by meaty classics such as lumpia Shanghai, sisig and bistek.

After Christmas and on New Year’s Eve, my mom would whip out the cheese fondue pot and tell stories about growing up on a dairy farm in Switzerland while we dipped bread into the gooey, stringy, cheesy goodness. My sister and I would reminisce about the times we visited the farm and met our relatives. In 2015, the highlight of our trip was visiting the town of Gruyère, the home of the cheese of the same name.

Meat and dairy were central to my life and my cultural identity. Being vegan never occurred to me because my tastes in these foods had been engrained from a young age. I used to laugh at the mere thought of veganism because I equated it with hippie culture. It wasn’t until college that I started to understand the health, environmental and ethical implications of veganism.

>>>Read: On Being the Vegan at the BBQ

As a 19-year-old freshman, I took my first environmental science class, where I learned animal agriculture is the second-largest contributor to human-made greenhouse gas emissions, after fossil fuels. It is also a leading cause of deforestation, water and air pollution and biodiversity loss. During that lecture, my mouth dropped. Never had I heard such horrifying facts about our food system, nor imagined I was mindlessly contributing to climate change by consuming the foods that I loved. I looked around the room to see the reactions of my peers, but it seemed I was the only one visibly shocked.

Climate change is an issue I was most passionate about, so when my professor brought up something about it that I hadn’t known, it came as a surprise. Growing up, I was taught to turn off the lights, to unplug cords not in use, to ride my bike over driving, to carpool, and to bring my own bags while grocery shopping. Never was it apparent that specific dietary habits like eating meat and dairy were bad for the planet. Since that day in class, I began to wonder what else I had not been taught about climate change.

After doing some research, watching a few documentaries, and talking with my professor, it seemed the only thing I could do was reduce the amount of meat and dairy I consumed. This led me to discovering veganism. So at the end of the semester, I vowed to drop meat completely.

I was scared. I didn’t know how I could survive on plants only, and I thought I would never eat a flavorful meal again. So I began to watch vegan YouTubers and food bloggers such as Megan Roosevelt and Sadia Badiei, both of whom are registered dietitians. Their advice and nutritional expertise gave me a new perspective on plant-based eating. It didn’t have to be boring and bland, but rather flavorful and diverse in color.

I reinvented my relationship with food. I learned veganism isn’t restrictive. It’s a lifestyle of abundance and the incorporation of more good things like whole fruits and vegetables. Trying different recipes gave me confidence in the kitchen and opened my eyes to the importance of viewing food as medicine. I started making vegetable and tofu curries, experimenting with jackfruit “pulled pork” tacos, Filipino “chik’n” adobo and Swiss “cheeze” raclette, and occasionally indulging in the meatless burgers from Impossible and Beyond Meat. 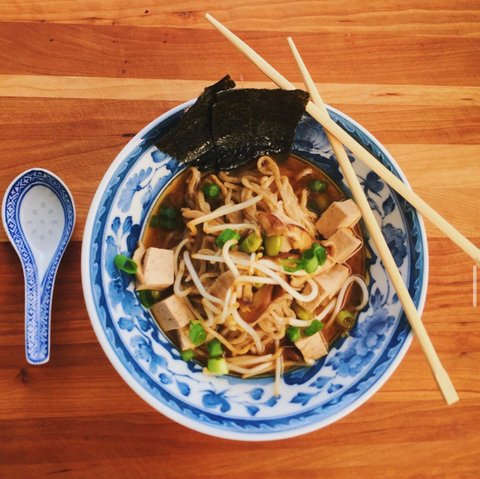 I gained such a passion for cooking that I started my own recipe blog on Instagram to show friends and family how easy it is to eat vegan. Furthermore, I changed my major to nutrition to expand my knowledge and to inspire people to be more conscious of their own health and the health of the planet.

The study of nutrition is a comprehensive science rooted in biological and chemistry-based understanding of the human body. And as a scientist, I side with the facts and figures that tell me what is healthy and what isn’t. Although my respect for the environment is strong, I would not be vegan if the scientific evidence proved it would be detrimental to my health. Fortunately, the U.S. Dietetic Association classifies vegan diets as safe and nutritionally adequate for all life stages, including pregnancy. And as a fourth-year student who has completed most of her macro- and micronutrient metabolism courses, I can tell you that you won’t die from protein deficiency.

Vegans can get protein from all sorts of sources including beans, legumes, cruciferous vegetables, nuts, seeds, tofu and other soy protein. One cup of mung beans, for example, contains all nine essential amino acids and 49 grams of protein, well above the 46-gram daily recommendation for women and close to the 56-gram recommendation for men. Whole sources of soy such as edamame, tofu, miso and tempeh provide complete proteins as well. Even those “incomplete proteins” can meet your needs.

“Including a wide variety of plant foods such as legumes, lentils, nuts, seeds and whole grains on a daily basis will allow for you to get the complete protein you need,” said functional medicine dietitian Rachel Stockle, according to the Cleveland Clinic.

Vitamin B12, on the other hand, only naturally occurs in animal products, but vegans get what they need with supplements or fortified foods such as non-dairy milks, cereals or nutritional yeast that have it added. With a balanced diet, a vegan can meet U.S. dietary guidelines.

My transition into veganism surprised family members who had seen me over the years snacking on cheese and devouring the chicken adobo at family gatherings. My mother, in particular, surprised me as the first person to support me, considering dairy farming was my family’s legacy for hundreds of years.

Breaking away from dairy came with questions about vitamins and the health benefits of alternatives. Through it all, she was interested. Without her unconditional love, support and open-mindedness, I probably would not have stayed vegan. She taught me so much about cooking while, in turn, being receptive to the idea that humans do not need milk to be healthy. She no longer drinks milk as a result. As for my Filipino side, they were equally surprised but glad to learn more about healthy habits. My titas (aunts) eat mostly vegan now, and my grandpa loves to make me vegan versions of lumpia, a Filipino spring roll. I am lucky to have a supportive and open-minded family.

My three-year journey has not come without its mistakes. Not all vegans are perfect and some, myself included, will occasionally and accidentally eat something with, say, dairy in it, but what is important is that the integrity remains. We are all in this journey together and for a purpose much greater than ourselves. This lifestyle has taught me to recognize the unsustainable habits I follow and to counter with more sustainable practices while keeping the future of the Earth’s health in mind.