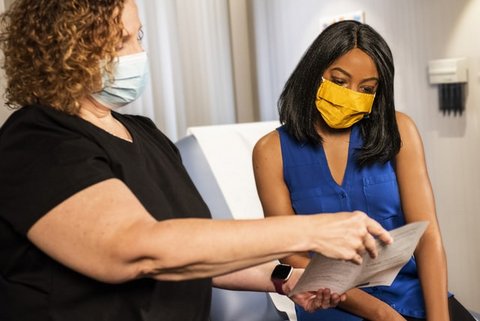 Posted at 07:00h in COVID-19, Health by Danielle Parenteau-Decker 0 Comments

(Photo by CDC on Unsplash)

Vaccination numbers remain low among Black people in California despite over 60% of the state’s residents being fully vaccinated.

In April, California launched a concentrated effort to increase vaccine access in Black communities and encourage people to educate themselves about the importance of vaccination.

The state established several community partnerships with locations including barbershops and churches to make vaccine distribution equitable. At one point, someone could go to a pop-up clinic in over 150 McDonald’s locations across the state. (Twenty-two clinics remain at this time, according to their website, most in Southern California.)

Faith leaders have been instrumental in outreach efforts across the state and have embraced opportunities to better educate their congregants.

“We’re utilizing churches and pastors as trusted messengers to lead our community,” said Sabrina Saunders, founder and director of the One Accord Project, a nonprofit organization based in Richmond.

The organization is utilizing several outreach methods, including a radio show and a billboard campaign, to encourage people to get vaccinated. It hosts monthly briefings with clergy and expert epidemiologists. It also works with faith leaders and has hosted 10 mobile vaccine clinics.

Saunders says that One Accord’s clinics have led to several hundred people getting vaccinated. Part of the success comes from pastors’ commitment to working together. Working with healthcare professionals may have alleviated some concerns as well.

“Pastors allowing themselves to partner with county health professionals has also helped, I believe, the county’s reputation. Because in a lot of our communities, people have been skeptical of the county,” said Saunders.

According to Saunders, Black people have the highest rate of infection in Contra Costa County and the majority are unvaccinated.

As of Monday, Black people in the county have COVID-19 at a rate of 665.1 cases per 100,000 residents over the past 30 days, the highest of any specified racial or ethnic group, according to Contra Costa Health Services. Overall, the case rate is highest among Hispanic/Latino residents. Around 85% of county residents 12 and older are partially or fully vaccinated, while 64% of Black residents 12 and up are at least partially vaccinated. Asian, white and Hispanic/Latino residents and people classified as “other” are all vaccinated at a higher rate. Only the “multiple races” category has a lower percentage of people vaccinated.

Distrust in the medical system has a long legacy within Black communities. The Tuskegee Experiment has repeatedly come up as an example of why many Black people are hesitant to get vaccinated. Over the course of a 40-year study, the United States Public Health Service and the Centers for Disease Control and Prevention infected nearly 400 African American men with syphilis without informing them of their diagnosis. The study ended in 1972, and over 100 participants died as a result.

For some, it’s hard to believe that governments would want Black people to be protected against the coronavirus.

Richmond poet Donté Clark has his reservations about the vaccine, given that the government has been pushing it in Black communities.

“I feel like they don’t really have public health in mind. I don’t really trust it. You don’t care whether I am healthy; you have another agenda. We can speculate what it is, but it ain’t my safety, especially as Black people. It can’t be,” said Clark.

“You can watch me get shot dead in the street, then you care about whether I get COVID-19 now? C’mon, now. Public safety is public safety,” he continued.

Saunders has heard all the conspiracy theories, such as there being a chip in the vaccine and there being a link to the mark of the beast. She says that people in their 20s have also shared concerns that their fertility will be affected.

The fertility claim has gained traction after rapper Nicki Minaj tweeted Sept. 13 that a friend of her cousin in Trinidad and Tobago became impotent after receiving the vaccine. Minaj shared that she isn’t vaccinated and that she is continuing to do her own research. She was unable to attend the MTV Video Music Awards after contracting COVID-19. She decided against attending the Met Gala due to its vaccination requirement.

The Minister of Health of Trinidad and Tobago debunked Minaj’s claims about her cousin’s friend and says that no such case has been reported.

“We have no evidence at all that COVID vaccines affect a person’s fertility. Right now, we’ve been collecting data on people who’ve received the vaccine, and so far, there’s been no reports of men or women becoming infertile or impotent,” said Dr. Uché Blackstock in the Grio.

An emergency physician and founder of Advancing Health Equity, Blackstock is a prominent voice on social media when it comes to vaccine education. She tweeted an offer to sit down with Minaj to discuss the vaccine. She noted that impotence is “significantly more likely from COVID,” not the vaccine.

The response to Nicki Minaj demonstrates how social media has played an instrumental role in spreading misinformation. Earlier this year, the Center for Countering Digital Hate released a report titled “Disinformation Dozen,” which identified 12 influencers who fueled the popularity of hoaxes and myths surrounding the COVID-19 vaccines on Facebook, Instagram and Twitter.

According to the study, their research “found anti-vaxxers using social media platforms to target Black Americans, exploiting higher rates of vaccine hesitancy in that community to spread conspiracies and lies about the safety of Covid vaccines.” One influencer in particular is a Black man named Kevin Jenkins, who claims the vaccine is an experiment targeting Black people and believes it will wipe out the Black population.

“I think there’s been almost two pandemics: There’s a pandemic of COVID-19 and a pandemic of misinformation particularly targeted at people of color,” Sabrina Saunders said.

Many celebrities with Bay Area roots are using their platforms to encourage people to get vaccinated. In April, former NFL star Marshawn Lynch used his platform to talk with Dr. Anthony Fauci about vaccination hesitancy in communities of color. Golden State Warrior Stephen Curry has advocated for COVID-19 vaccines and also interviewed Fauci twice last year. Actor Daveed Diggs has participated in public service announcements about the vaccine and collaborated on a commercial with CNN’s Dr. Sanjay Gupta.

Alice Onu, a pediatric medical assistant in Walnut Creek, did not get vaccinated without hesitation. Initially, she was concerned by how quickly the vaccine was created.

The seemingly rapid turnaround was made possible by extensive funding and existing research. According to scientists, it was all hands on deck and creating a vaccine was a priority for the industry.

Onu resisted getting the vaccine until she realized her risk of COVID-19 exposure would increase.

“It wasn’t until my manager told me that our practice will start seeing sick kids who could potentially have COVID-19. That got me really scared because my mom has hypertension, diabetes,” she said.

Onu lives in Berkeley with her mother, who works from home and doesn’t leave their house often. Despite her skepticism, Onu said she received the vaccine to protect her mother.

In December, Onu was part of the first waves of vaccination recipients. She ended up ill from multiple side effects, including a headache and fever, for three days beginning 24 hours after receiving her first dose of the Pfizer shot. Onu was unaware that the vaccine was still in clinical trials at the time, so a friend encouraged her to read more about it before getting her second dose. Feeling like a lab rat made Onu uneasy, and she considered not getting the second dose.

Her mother pointed out that Onu’s experience would be futile if she did not complete the process. To Onu’s relief, she did not experience side effects following the second dose. Onu doesn’t have strong feelings about being vaccinated but says having done so allows her to participate in California’s reopening.

Participating in conversations about vaccines can be a powerful tool for everyone regardless of fame. As part of its “Power of One” campaign, the One Accord Project encourages vaccinated people to talk to an unvaccinated person about their experience.

“All we can do is provide accurate information from people they trust in the community,” said Saunders.