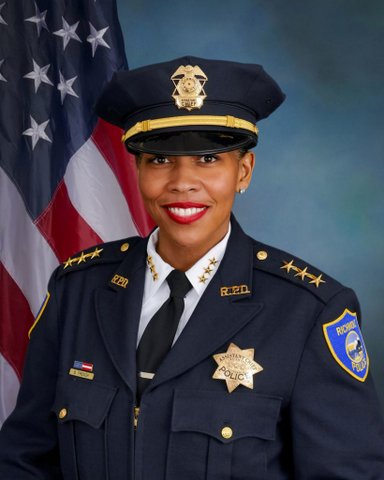 Richmond Police Chief Bisa French was put on leave Wednesday, after a domestic violence restraining order was filed against her and her husband, Lee French, an Oakland police sergeant.

A family member requested a restraining order against the couple Oct. 7, according to Contra Costa County court records. A hearing is set for Oct. 25.

The Oakland Police Department confirmed Thursday that Lee French also was put on leave and said an internal investigation is underway into “criminal allegations.”

In court documents, an 18-year-old relative accused the Frenches of attacking her and threatening to kill Joe Goldman, whom she says is her partner. Goldman, also known as Oho McNair, was charged Tuesday with pimping, human trafficking and pandering from an incident that occurred in June, Alameda County court records show.

In applications for restraining orders against Bisa French, 46, and Lee French, 47, the 18-year-old said that the couple pinned her in a police hold, and that Bisa French “texted me and said ‘does someone have to die for you to come home.’ ” The applications also seek protection for Goldman, 33, his 13-year-old daughter and his 72-year-old mother.

Richmond City Manager Laura Snideman acknowledged that Bisa French is being investigated in a statement Wednesday night but did not provide details. Richmond police Lt. Matt Stonebraker, the public information officer, said the length of French’s leave has not been determined. He said the department would have no further comment.

“The City of Richmond can confirm it has placed its Chief of Police on paid administrative leave because of an unfolding family situation,” Snideman’s statement read. “It’s imperative that we let the investigations play out without distraction and in accordance with established protocols that assure an objective assessment of the facts.”

Oakland police initiated the internal investigation of Lee French after receiving information from the Vallejo Police Department. According to the Mercury News, the Frenches had allegedly threatened Goldman at his mother’s home in Vallejo.

“As the Chief of Police, when an incident occurs in Vallejo which involves police officers employed by another department, it is my responsibility to contact the employing department to inform them of accusations involving one of their members, so the employing agency can launch an internal affairs investigation,” he said in a prepared statement.

Bisa French rose through the ranks to become the city’s first female police chief in July 2020.

Richmond Mayor Tom Butt said he was caught off guard by the news when a reporter phoned him for comment Wednesday night. In his newsletter Thursday, Butt said Snideman sent the City Council an email last Friday saying only that French was “unexpectedly taking personal leave to address a distressing family situation.”

“There is a world of difference between ‘taking personal leave’ and being ‘placed on administrative leave,’ Butt wrote, adding that he found the secrecy at City Hall frustrating.

He added that the French family “deserve our compassion, our prayers and our support as they work through this to, hopefully, a positive outcome.”

This story was originally published by Richmond Confidential and has been republished with permission.