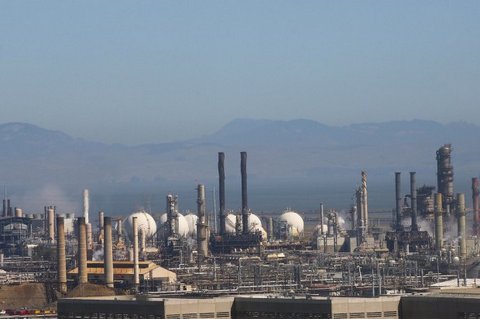 Posted at 16:31h in Environment, News by Danielle Parenteau-Decker 0 Comments

By Maria Bernal for Richmond Confidential

Twice last week, on Oct. 24 and 27, flaring events spewed smoke, fire and gases into the air around the Chevron Richmond refinery, concerning residents and closing three schools on Oct. 25.

Late in the week, the events were still under investigation by state, county and local agencies, and Chevron had not addressed the situation on its website.

At 8:25 a.m. Oct. 24, according to a report filed with the Governor’s Office of Emergency Services, there was a problem at Chevron that created a flaring event. Chevron reported the problem at 9:16 a.m., the OES report shows. Agencies that responded included the Chevron Fire Department, Richmond Fire Department, Contra Costa Health Services, California Division of Occupational Safety and Health and the Bay Area Air Quality District.

The 72-hour report on the county Health Services website three days later, said flaring and a small fire had occurred when multiple process units were shut down following an operating issue that resulted in steam production loss. The Chevron Fire Department quickly extinguished the blaze, the report said, and continued to monitor the air at the refinery and in the neighborhoods around it. The report said hydrogen sulfide and sulfur dioxide did not exceed allowable air pollution limits.

A sulfur-like smell blanketed Richmond on Oct. 24 and 25, forcing the closure of Richmond High School, Ford Elementary and Peres K-8 School shortly after students had arrived.

In a note to the school community on Oct. 25, West Contra Costa Unified School District Superintendent Chris Hurst said the source of the odor wasn’t determined but that the schools were evacuated following PG&E’s advice. He noted that the district had also reached out to Chevron.

On Oct. 26, Chevron spokesperson Linsi Crain declined to answer specific questions from Richmond Confidential and pointed to the 72-hour report as the “best step for detailed information.”

She added: “We are experiencing intermittent flaring as we manage recovery from the process unit upset. We are urgently working to minimize and stop the flaring. Chevron and various regulatory agencies have taken numerous air quality measurements which are well below health standards and mostly under detection limits in our adjacent neighborhoods.”

Richmond Fire Marshall Eric Govan said he is working with several agencies to pinpoint the source of the odor that hung so heavily in the air on Oct. 24 and 25. On Friday, he said, “There’s no source that anyone was able to come across 100%.”

In the meantime, another flaring event occurred about 10:30 p.m. Oct. 27, releasing sulfur dioxide that exceeded the threshold amount required for notification, a separate OES report said. But there was no off-site impact, it added.

Jim Yoke, Richmond’s emergency services manager, sent out a notification on Nixle about Chevron flaring events Oct. 24 and 27, labeling them as Level 1, which does not require public action.

Flaring events usually are noticeable by puffs of billowing smoke in the air. On its website, Chevron says it works to prevent flaring, which it called “a visible part of our comprehensive network of safety systems designed to keep equipment running safely and reliably.”

Contra Costa Health Services said in a Facebook post Oct. 25 that people who are sensitive to the odors should consider staying indoors.

Two days later, Paola Casillas, who lives in Atchison Village, across the highway and no more than a few blocks from the refinery, said her eyes and throat were still irritated.

“All day yesterday was smelly, like sulfur. … It was weird,” she said.

Casillas said that on the night of Oct. 24, her house shook, and she heard a boom and car alarms sounding. She went outside to see what had happened and noticed an orange glow from the plant. It isn’t clear what Casillas heard, as state and county reports do not mention any type of explosion.

Casillas said she reported what she heard to the Bay Area Air Quality District.

“On [Oct. 24] evening the Air District received two complaints that mentioned a load noise possibly having to do with Chevron,” Bormann said in an email. “We also received a delayed call today about noise on [Oct. 29].”

The refinery has long been a source of pollution in and around Richmond. In March, a quarter-inch hole opened in a Chevron pipeline, spilling 500 to 750 gallons of a diesel-water mixture into San Francisco Bay. An independent firm is still investigating that spill. One of the questions raised was why Chevron took 40 minutes to contact the National Response Center about the spill when California regulations require immediate reporting.

The spill reignited a push by many community members and environmentalists to close the refinery, which is Richmond’s largest employer and taxpayer, and benefactor to a number of area nonprofits. It also sparked a lawsuit from commercial fishers who say Chevron’s practices contaminate the bay, threatening their livelihood.

This story was originally published by Richmond Confidential. It has been reproduced with permission.