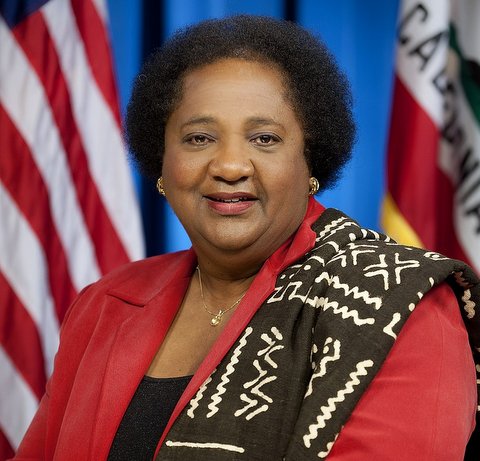 The first African American to serve in the role — and the fifth Black person to become a constitutional officer in California — Weber took office Jan. 29, 2021.

Weber has been a central and influential figure in California politics for years. She was an assembly member representing the 79th District in San Diego County and chaired the California Legislative Black Caucus. In the Legislature, she introduced groundbreaking bills, including one of the strictest laws governing police use of deadly force in the country. It will protect Californians on “both sides of the badge,” she said, celebrating that legislation, which was supported by the California Police Chiefs Association.

Weber also introduced AB 3121, a bill that set up a committee called the Task Force to Study and Develop Reparations Proposals for African Americans. The group is charged with examining California’s involvement in slavery — and how California should compensate the descendants of enslaved Black Americans.

As SOS, Weber is responsible for conducting elections in all 58 counties, managing the operations of the State Archives, and keeping a registry of businesses and nonprofits statewide.

“We passed legislation that gives everybody a vote-by-mail ballot, and we’ve seen that it works” says Weber, sharing details about a major electoral policy change she has implemented as SOS. “We have to make sure that every eligible Californian not only gets the right to vote, but that they are registered to vote and that they show up.”

California Black Media: As an assembly member, you introduced groundbreaking legislation. What has the transition been like, moving from actively creating policy to settling into the administrative role of secretary of State?

Shirley Weber: It’s been interesting, to go from being a legislator where you share the responsibility of representing all Californians with 80 others in the Assembly and another 40 in the Senate.

Over here, you have an administrative role, and we support legislation like the Voting Rights Act.

It’s been somewhat difficult to let go of my district. Fortunately, my daughter is the assembly member there now.

CBM: The U.S. Senate did not pass the John Lewis Voting Rights Advancement Act. Why is that significant and why are voting rights so important in America right now?

SW: When Gov. Newsom asked me to be secretary of State, the first thing that popped in my mind was voting rights. This wasn’t a position that I had lobbied for. We had made some tremendous changes in the Assembly and passed some groundbreaking legislation.

Speaking to a reporter last December 22[, 2020], I said this is a critical time because our nation is in peril. And he goes, “What do you mean?” I said, “Our democracy is in crisis.” He didn’t understand. When Jan. 6 hit (the insurrection at the U.S. Capitol), people understood.

I recognize this is a difficult and unique time for people in the nation, extremely difficult for African Americans, because most of us who have parents or we ourselves have lived through this struggle for voting rights.

My family understood the power of voting. My parents came out of Arkansas where they never got a chance to vote. My dad was an adult with six kids before he actually got a chance to register to vote in California.

CBM: What can ordinary Californians who care about expanding and protecting voting rights do?

SW: We need to pay attention. We must fight laws that make it difficult for people to vote. Even though we don’t have that legislation coming out of our Legislature, we have people putting initiatives on the ballot.

California has expanded voting rights so much that people want to limit it. There’s only one group that can’t vote in this state: those who are physically in prison. Everyone else who meets the eligibility requirements in California can vote. And that frightens some people.

CBM: Do you see that movement to counteract the expansion of voting rights here in California or from other states?

SW: It is coming from within and without. We have to be careful of the deceptive methods used. Take the campaign against bail reform. It had been signed into law. And a group of bail bondsmen took a whole bunch of money, manipulated African Americans and put their faces on television. It confused voters and wiped out this whole effort we had been working on for five or six years.

CBM: Do you think other secretaries of State across the country will emulate California’s efforts to expand voting rights?

SW: We are seeing that, especially in states with Democratic leadership. But in other places, we see also them fighting the Voting Rights Act.

Secretaries of State are a unique breed. Many are appointed by governors. Across the nation, people on the far right are organizing to get candidates to run for secretary of State, where before it was seen more as an administrative job with a few other responsibilities. Now, it is seen as a highly political job, especially given the legislation that’s coming out in some places that would empower Legislatures to overturn votes.

CBM: You’ve been in this job for a year. Do you feel like you’ve accomplished your goals?

SW: I didn’t take this position because I needed to be a constitutional officer, or one day become governor. The question for me was: What does the secretary of State have to offer in these critical times? And obviously it is the defense of our democracy. I was coming in with the idea that we are going to expand our voting base. We have done that.

Statewide, 88% of eligible Californians are registered right now to vote. My goal is to get it to 100%.

CBM: Is California implementing additional safeguards to make sure irregularities are minimal?

SW: Yes, we are. We have a system that verifies votes. We test every machine in California before every election. We make it possible for people to observe the process. They can’t come and start counting themselves. But they can observe. We do all this with transparency.

CBM: How does it feel to look at that long wall of portraits of past secretaries of State, and know that your legacy will be enshrined in California history?

SW: I’m very grateful. When I was sworn in, somebody says you’re the first African American after some 170 years. How does that feel? I said, well – what took so long?