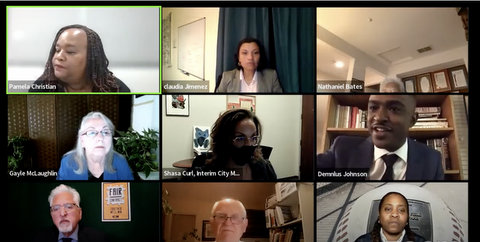 Richmond received nearly $10 million from the state, which it will use to make the Iron Triangle greener and more pedestrian-friendly, among other things, as discussed at Tuesday’s City Council meeting. (Screenshot captured by Julia Métraux / Richmond Pulse)

Mays, who is 90 years old, played most of his major league career for the San Francisco and New York Giants. His involvement with Richmond includes participating in March of Dimes charitable events and working with Little League teams.

“He’s done so much for people through his own personal philanthropy, with scholarships,” Joey Smith, the chair of Richmond’s Recreation and Parks Commission, said. “I know people whose sons have gone to college because of those scholarships.”

The parks commission also said at its Dec. 1 meeting that the renaming of the park would coincide with establishing Willie Mays Day, which would be May 6, Mays’ 91st birthday.

“The plan is to ferry Mr. Mays from San Francisco to Richmond and to have him escorted through a parade caravan to Nicholl Park, where the dedication will take place,” Bates said.

The council adopted the resolution to rename the park in Mays’ honor without any debate.

Second, the council and members of the public spoke about the possibility of renaming the South 37th Street Underpass the Juneteenth Freedom Underpass. Richmond’s parks commission also recommended that the City Council adopt this change at its Dec. 1 meeting.

A mural honoring Juneteenth, which celebrates the emancipation of Black slaves in the United States, is in the works at the South 37th Street Underpass. The mural will be completed by May 31, according to the Richmond Standard.

“The bottom of the mural has wording that honors Jerrold Hatchett, a local leader who has played a critical role in preserving and sustaining the Juneteenth festival in Richmond for over 15 years,” Stephanie Ny, the program manager in Richmond’s community services department, said.

Several members of the public also spoke during the public hearing session for this resolution about the significance of the location of this pass and mural.

“This has been a longstanding portion of the Juneteenth parade route to … Nicholl Park with the annual festival,” Joey Schlemmer, a retired Richmond Police Department captain, said about the underpass.

The council unanimously approved the resolution to rename the underpass to the Juneteenth Freedom Underpass. Council member Demnlus Johnson also spoke about his excitement for Juneteeenth this year.

“[This] upcoming Juneteenth, just wait on it,” Johnson said. “It’s gonna be amazing.”

Richmond was awarded $9.99 million dollars from the state to help with projects to clean and revitalize the city.

The second grant will go toward making the Iron Triangle more accessible for pedestrians, adding more trees and plants to the area, and installing litter abatement facilities.

The next City Council meeting will be held March 15.