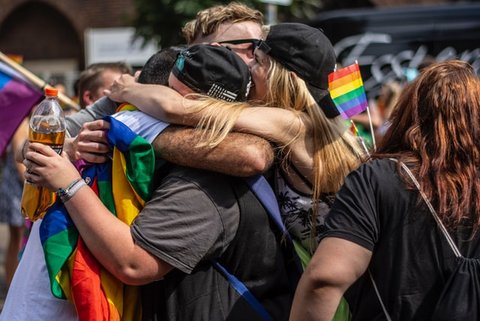 The unconditional love and acceptance of the LGBTQ community makes it “like the perfect religion,” writes the author, who identifies as a straight man. (Photo by Jana Sabeth on Unsplash)

As a child, I was raised in a religious family. Many of my family members would make sure to tell me when I was a kid that God had only created two genders, and though to a certain extent that might even be true, respecting and understanding differences in each other is what makes us better habitants of this earth.

In my teenage years up until I turned 20, I had never experienced having to call someone by a different pronoun from what I expected or was used to. I genuinely got confused, at first, but then I understood what it meant to another person to have that respect of being called what they wish to be known as.

When I first met this person, he was transitioning. He would come to work with a smile on his face and be nice to everybody without any judgment. He was one of the best workers at the place. I would speak to him on a daily basis about things in general until one day he was comfortable enough and explained to me how he didn’t feel he could be himself around his family and why.

And at this exact moment, I also learned that sometimes, family could be your biggest enemy or your biggest supporter; it all comes down to whether you had that privilege of being unconditionally loved.

As kids, most of us are taught not to question the adults in our lives. We are taught to blindly follow, believe and agree with everything they say and do. We are not allowed to ask why. We are just told to follow and stay quiet.

Growing up as a boy, I was told not to paint my nails. I was told to dress a certain way, talk a certain way, and not do anything of what the opposite sex would do. One time, my mom found clear nail polish and immediately removed it before the rest of my family could see.

I was told only women wear makeup. I was told, “Men don’t do women stuff.”

Everything seemed like that’s the way it was always going to be, or that it had to be like that.

I was taught you needed a woman to do your chores, while men sat and watched games. I was taught men don’t cry. I was expected to “man up,” and even though I’m grateful for some of the ethics I was taught in life, now I can clearly say some, if not most, are unnecessary, toxic and dangerous ways to raise children.

I always wondered if most of these principles were religion-based or simply generational trauma that kept cycling back and forth. If I had to guess, I would say it’s a mix of both, societal and religious standards that simply hold humans back and against each other.

When I arrived in the U.S. from Honduras when I was 12, I learned about a certain community that I had never heard about before: the LGBTQ+ community, a community that was more than a community; to me, it was like the perfect religion.

Everybody accepted each other and loved each other unconditionally, and that’s when I first started learning about Hate-Free Zones, and that I could be myself without worrying about how I walk, talk or move. And about people telling others they’d go to hell for simply being themselves. I learned that everyone deserves the chance to do what they wish to do without being quickly judged based on their persona.

Even though I consider myself a straight man, I have learned so much from this community in a really short amount of time. So many of my questions were answered, and so much knowledge and love I didn’t ask for was shared that I understood what it meant to simply be happy. I understood the traumas and the questions that kept me awake at night. I finally understood the love that was held back by the invisible societal barriers through generations.