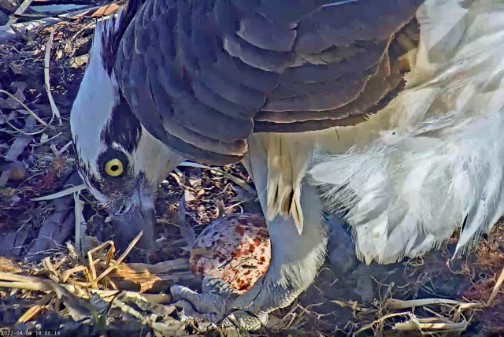 Posted at 22:00h in Environment, News by Pulse Editor 0 Comments

Rosie the osprey laid the first of what will likely be three eggs Tuesday in a nest located on an inactive shipyard crane located in the Rosie the Riveter World War II Home Front National Historic Park in Richmond. (Video grab / Golden Gate Audubon Society via Bay City News)

Richmond’s favorite osprey, Rosie, has laid her first egg of the season.

Rosie and her mate Richmond’s (the osprey, not the city) new egg was spotted at 6:01 p.m. Tuesday, according to the Golden Gate Audubon Society, which has had a camera embedded with the birds the past five years.

The egg is the first of what will likely be three eggs, since the couple has produced three eggs each season since 2017, when the camera was installed 75 feet up, on the cabin of an inactive whirley crane located in the Rosie the Riveter World War II Home Front National Historic Park in Richmond.

According to the Audubon society, the ospreys spent the last month rebuilding their nest. Rosie migrates — possibly to Mexico or Central America — for the winter, while Richmond is one of just a few male ospreys who spends the winter in the Bay Area.

Rosie will likely lay her remaining eggs within the next four to six days. The pair will then take turns incubating the eggs for 36-42 days, with hatching likely to occur in mid-May.

“Rosie and Richmond inspire us each year when they return. They demonstrate true perseverance,” said Glenn Phillips, the executive director of Golden Gate Audubon, in a statement. “Their nest was taken apart over the winter by a pair of common ravens nesting nearby, yet they rebuilt, and are back in action again this year.”

Rosie and Richmond have fans around the world, who have enjoyed Richmond’s eclectic choices for nesting material over the years, including several stuffed animals and a cushy toddler jacket.

When one of the pair brings home a fish for the family, viewers are encouraged to call “fish!” on the live chat. Then, the fish is identified and entered into a fish matrix, which is available for download. Lesson plans are available and teachers are encouraged to build STEM projects around the data. Last year, Rosie and Richmond brought 764 fish for themselves and their three juveniles.

According to Golden Gate Audubon, ospreys are sometimes called seahawks and have a wingspan of about five feet. Their numbers plummeted in the 1960s and ’70s due to the pesticide DDT, which caused the shells of their eggs to thin and break.

With the banning of DDT, osprey populations have recovered worldwide, and this year at least 28 pairs are now incubating eggs along San Francisco Bay, with more just beginning the breeding cycle. In 2021, there were 93 young fledged from 40 successful nests.

Live streams of the nest cam are viewable at sfbayospreys.org, along with osprey information and lesson plans for educators. Highlights from the cam are posted on the SF Bay Ospreys Facebook page and YouTube channel.