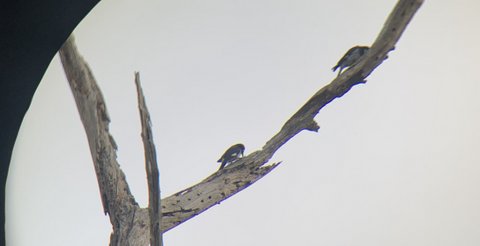 Posted at 13:02h in Environment, History by Danielle Parenteau-Decker 1 Comment

Story and photos by Hanisha Harjani

The Christmas Bird Count spans many decades in the Bay Area. In Oakland, the count started in the 1940s, while the San Francisco count began even earlier, in 1916. This year, it has finally come to Richmond — the first new count established by the Golden Gate Audubon Society in a long while.

“My dream is to cultivate birding,” said Karyn Noel, one of the coordinators of the Richmond count. Noel has been living and bird-watching, or birding, in the area for decades and knows what a hotspot it is for birds.

Richmond has a unique landscape that lends itself as sanctuary for these winged wonders. Much of the city borders the San Francisco Bay, inviting shorebirds and waterfowl from near and far. The city is also dotted with green parks full of trees and bushes — reliable habitat and sources of food. Even the Chevron refinery is home to an osprey nest.

All of this raises the question — if this area is so rich with birds, why is this the first year the Audubon Society has hosted an official count there? The answer is multifaceted.

The Christmas Bird Count started in 1900 when ornithologist Frank Chapman proposed it as an alternative to the Christmas Side Hunts that traditionally took place at the time. The Side Hunts were an incredibly popular event where teams of hunters would compete to kill the largest number of animals and birds in a day. Unsurprisingly, the hunts caused bird populations across the country to plummet, and people started worrying about the event’s impact.

Chapman’s environmentally friendly alternative quickly became popular with bird enthusiasts across the country. What began as 25 bird counts around North America in 1900 has reached 395 counts.

Over the years, the counts have become a citizen science project that collects important data on local biodiversity. A lot goes into making a new count possible.

First, count compilers must identify the area covered by their count circle and break it up into pieces for volunteers to walk through. Then, on the same day each year, those groups of birdwatchers write down a list of all the birds they see in their assigned zones. Afterwards, that list is sent back to count compilers to tally up the numbers from all the groups within their count circle.

Through the years, as new locations were added, rules had to be established so that the data collected continued to be accurate and of scientific use. It was determined that a region selected for a count must be exactly 15 miles in diameter and must not overlap with another count circle.

As the count grew in popularity, enthusiastic birders willing and able to organize a count established more regions. Richmond was ruled out because it overlapped with the Benicia, Oakland and South Marin counts. This was not for a lack of birds in Richmond, however, but rather, a lack of birders.

“We have a fundamental problem,” said Sam Zuckerman, of the birding community. Zuckerman was an area leader in Central Richmond during this year’s count and birds avidly in the area year-round.

“Demographically, [birders] represent a really narrow slice of humanity in the Bay Area,” he said.

Glenn Phillips, the executive director of Golden Gate Audubon agrees. “The counts started in wealthier communities.” By comparison, “Richmond is a community that was historically redlined and underserved.”

Richmond has always been a working-class city, from the days of the Kaiser shipyard to today. These communities do not have the same time or resources as their wealthier counterparts to spend all day looking at birds. Though three Important Birding Areas are within city limits, officially starting the count in Richmond proved difficult.

“Somebody said, ‘There’s no birds there,’ ” Noel said.

She said the Chevron refinery, jutting out at Point Richmond, and the Iron Triangle, bound by railroad tracks, just don’t seem inviting to birds. But Noel knows better. Where others see human interference and overdevelopment, she sees habitat.

It’s surprising, the variety of birds that do live within the urban greenery of Richmond. A rafter of turkeys meanders through a parking lot. Just a few feet up, near a pond, a woodpecker hammers into a tree. Later still, Noel points out the distinct teetering flight pattern of a turkey vulture as it circles woodland.

There are many reasons why these birds might choose to live in urban centers like Richmond. For some, these urban centers have fewer natural predators. For others, food is more reliable, their natural diets supplemented by bird feeders and food waste.

When Phillips approached the National Audubon Society with a proposal to establish a Richmond circle, however, it was denied because of the overlap with other area counts. Not long after, though, National Audubon returned with a different answer.

Phillips points to the organization’s new CEO, Elizabeth Gray, and her commitment to environmental justice for this change of heart. “My understanding is that she gave the directive that they needed to be looking at their practices and determine where their rules are reinforcing systemic racism and where they’re not.”

Establishing this first official count in Richmond is a big step in addressing this greater inequality within the birding community. Richmond has missed out on more than a century’s worth of bird data. For communities represented by the bird count, the trends and statistics gathered over the years have helped lead local conservation efforts. For instance, increased hunting restrictions for the American black duck occurred in large part due to the data collected from past Christmas Bird Counts.

This data has also informed reports on climate change from government agencies like the Environmental Protection Agency and Department of Fish and Wildlife showing specifically how birds are responding to a rapidly warming climate. Past counts have helped track the movement of invasive species, like the nutmeg mannikin, into new areas. All in all, this information helps residents better understand and engage with their environment.

Despite this great stride, Zuckerman and Phillips acknowledge that one day is not enough to remedy decades of inattention.

“Golden Gate Audubon has an obligation to engage with the community,” Phillips said, “on an ongoing basis — 365 days a year.” And that is exactly what Noel and her co-compiler on the count, Derek Heins, have planned.

This year’s count was wildly successful. All in all, 180 people participated and 158 species of birds were identified Sunday. Still, Heins and Noel imagine more for the years to come; perhaps a count twice the size, mostly made up of residents local to Richmond.

In preparation for the 2023 count, both compilers are building relationships with some of the many youth and environmental organizations in the area, such as Urban Tilth — a nonprofit community garden that often hosts programs for local schools.

Both Noel and Heins hope this new count has impacts that go beyond what’s expected of a simple Christmas Bird Count.

“I want to do social justice,” Noel said. Here, to her, that means introducing a community to a new way of seeing. When one becomes aware of the birds around them, it seems a new world opens up. As Heins puts it, the goal is to “bring the joy of birding to others,” by equipping the community with the tools to nurture a new generation of Richmond birdwatchers.

“Birding makes you look at the natural world in a different way,” Zuckerman said. “And that’s something that I personally hope that more people get a chance to experience.”

If you are a beginning birder interested in participating in next year’s count, you don’t have to wait till Jan. 2, 2023. Heins encourages new birders to participate in one of the many free field trips Golden Gate Audubon offers on its website. New birders can join experts on hikes to see many different bird species and learn how to identify them on their own.