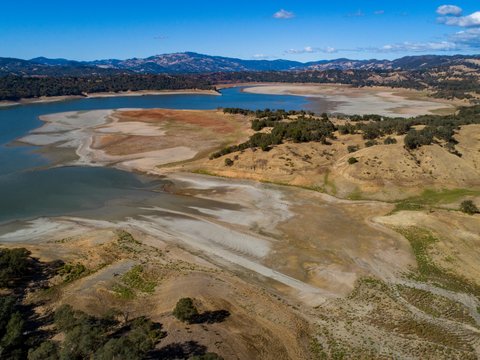 15 May Water Use Up Statewide Despite Ongoing Drought

Posted at 16:18h in California, Environment by Danielle Parenteau-Decker 0 Comments

Low water levels due to drought at Lake Mendocino, a large reservoir in Mendocino County, Calif., northeast of Ukiah on October 13, 2021. It covers 1,922 acres and was formed by the construction of Coyote Valley Dam in 1958. (Florence Low / California Department of Water Resources via Bay City News)

As California endures its third year of a historic drought, a recent record dry stretch has led to residents increasing water use despite a call from Gov. Gavin Newsom for additional conservation.

It was the highest statewide increase the state has seen, Rhoderio said during a news briefing Tuesday.
Additionally, from July 2021 to this April, Californians reduced water use by just 3.7% despite Newsom’s July 2021 request that residents reduce consumption by 15%.

The increase in consumption correlates to the dry, warm conditions experienced in March, which saw just 30% of average precipitation and was 3.6 degrees warmer than average, according to Western Region Climate Center data presented during the briefing.

“This month was a lot dryer and hotter and I think the numbers are quite telling,” Rhoderio said.

The U.S. Drought Monitor report from May 3 shows that 92% of the state is in a “severe” drought and about 40% of California is enduring “extreme” drought conditions.

The latest surface water storage data from the Department of Water Resources shows that while two of the state’s 17 major reservoirs, the relatively small Folsom Reservoir and New Bullards Bar, have above average amounts of water for this time of year, many are well below average.

Additionally, the most recent statewide survey shows that California’s snowpack is only 22% of normal for this time of year.

Following the driest three months to start a year in the state’s history, Newsom on March 28 issued an executive order calling on local water agencies to implement additional portions of their state-mandated “Water Shortage Contingency Plans,” which trigger restrictions on things like irrigation.

He also directed the State Water Resources Control Board to consider a ban on watering grass at businesses and institutions.
“We’ve been really driving toward a regional approach in partnership with local agencies,” said Lisa Lien-Mager, a spokesperson for the California Natural Resources Agency. “A lot of local agencies are setting new targets, implementing drought contingency plans.”

Many local water agencies have already implemented restrictions. For example, the Santa Clara Valley Water District board voted on April 12 to limit watering lawns and landscaping to no more than two days a week and never during the warmest parts of the day.

Also, the East Bay Municipal Utility District mandated a 10% water use reduction compared to 2020 and set a limit of roughly 1,646 gallons of water per day for households, which could face fines for ongoing over-use, and has limited outdoor watering to three times per week.

“We also recognize we’ve made a lot of progress so far in embracing conservation as a way of life,” Lien-Mager said. “We’re going to have to double down and make the most of our limited (water) supplies. We have to go further to adapt to the new normal.”