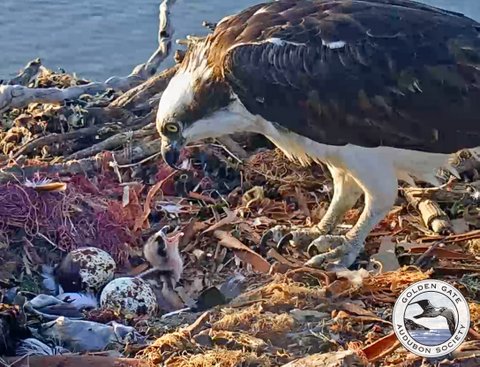 Posted at 16:27h in Environment, News by Danielle Parenteau-Decker 0 Comments

New ospreys have hatched in the nest atop a crane at the Rosie the Riveter historic park in Richmond. (Golden Gate Audubon Society via Bay City News)

Rosie and Richmond, the osprey couple who have nested each spring since 2017 atop a maritime crane on the Richmond waterfront, welcomed two new hatchlings this week, according to the Golden Gate Audubon Society.

The group’s osprey cam on Tuesday captured the moments of the first chick’s life with its parents in a nest 75 feet up atop the cabin of a decommissioned “whirley crane” in the Rosie the Riveter World War II Home Front National Historic Park.

The second egg hatched Wednesday, while a third is not expected to hatch, according to the Golden Gate Audubon Society.

The pair have produced three eggs each year since the launch of the live nest cam in 2017. The new chicks, weighing less than 2 ounces, will spend 50 to 60 days in the nest before flying for the first time.

>>>Read: Rosie the Osprey Lays Her First Egg of the Season

Visitors to sfbayospreys.org will soon have the opportunity to vote on the osprey chicks’ names through facebook.com/bayospreys.

Rosie migrates — possibly to Mexico or Central America — for the winter, while Richmond is one of just a few male ospreys that winter in the Bay Area. They reunited in early March, according to the announcement.

Live streams of the nest cam are viewable at sfbayospreys.org, along with osprey information and lesson plans for educators. 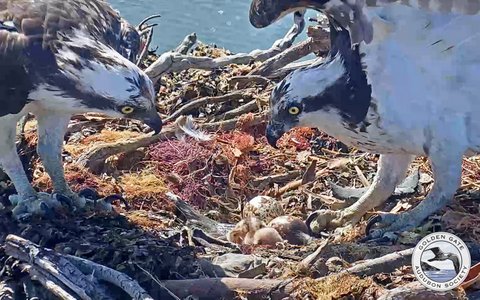 Osprey couple Rosie and Richmond have nested together on the Richmond waterfront each spring since 2017. They welcomed their newest chicks this week. (Golden Gate Audubon Society via Bay City News)