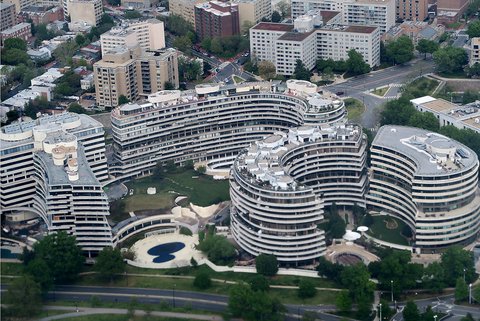 18 Jun Write On: A Witness to the Unthinkable

The ongoing congressional hearings about the Jan. 6, 2021, Capitol attack have brought back memories of the Watergate hearings, a very different time. (“Watergate” by Flickr user Alan Grinberg, used under CC BY-NC-ND 2.0 license)

Editor’s note: This story was first published in the Finger Lakes Times newspaper in Geneva, N.Y., and has been reproduced with permission.

My newspaper career started in May 1973, neatly coinciding with the U.S. Senate Watergate Hearings. It was about as thorough a baptism into real-world journalism as a young reporter just out of college could get.

As the greenest person in the newsroom, I had no real hand in what was being published about the hearings at my daily newspaper in Napa, Calif. But I witnessed history in a room full of veteran news professionals, learning lessons about the critical importance of accuracy, fairness and honesty in the media.

The Associated Press teletype machine clacked continuously with updates from the latest Senate committee testimony. There were ongoing news huddles, loud debates among editors and reporters erupting about how to display the committee stories in each day’s edition. The exact wording of headlines was ferociously argued.

And there was plenty of heated talk about how culpable then-President Richard Nixon might have been in the Watergate break-in. For some, it was unthinkable that a U.S. president could have been directly involved in ordering the burglary of Democratic Party headquarters in the Watergate Building. For others, it was very thinkable and extremely troubling. Nixon had few fans in the newsroom. But the specter of a U.S. president involved in a coverup was simply mortifying.

How relatively innocent that all seems today as the nation is transfixed as the House Select Committee holds hearings on the Jan. 6, 2021, attack on the U.S. Capitol.

In retrospect, the 1973 Watergate hearings were like an unfolding “whodunit” mystery. News reports trickled out details daily, with installments published in newspaper stories and on television news broadcasts. The latest testimony was chewed over wherever people gathered. Social media as we know it now didn’t exist.

By contrast, today’s media coverage of the House Select Committee hearings is so extensive it nearly buries readers and viewers in a fast-moving avalanche of information, images and impressions.

Equally thorough has been the lengthy sworn testimony about the events that led up to the mob surging into the U.S. Capitol and details about former President Donald Trump’s denials that he lost the election. Testimony confirms his closest advisers told him repeatedly he clearly came in second in the November 2020 election.

Shortly after watching video replays of the attack on the Capitol, I realized I was experiencing a touch of post-traumatic stress disorder.

Like much of the nation, I had been calmly watching television coverage Jan. 6, waiting to see the official electoral college ballots counted and the announcement that Joe Biden was president.  But any calm I experienced was shattered when the angry demonstration turned into an ugly, violent mob scene, live in real time. As the mob overran the police, I couldn’t believe it was happening. Seeing the replay — and the additional footage the committee has amassed — is as upsetting as it was that day.

And I wasn’t even physically present. How does it look for those who were there?

Many people would like to forget what happened Jan. 6, 2021. It’s understandable.

But the televised committee hearings are sending a clear reminder to the nation of just how close we came to a nation-crushing disaster, the threat of which still lurks.

We should all shudder to consider if the out-of-control mob that invaded the U.S. Capitol on Jan. 6 had gotten its hands on House Speaker Nancy Pelosi or other members of Congress. Suppose they had seized Vice President Mike Pence and taken him outside to the gallows they had constructed and hanged him as they chanted what they wanted to do.

But it nearly happened.

Fitzgerald has worked at six newspapers as a writer and editor as well as a correspondent for two news services. He splits his time between Valois, NY and the Pacific Northwest. You can email him at Michael.Fitzgeraldfltcolumnist@gmail.com and visit his website at michaeljfitzgerald.blogspot.com