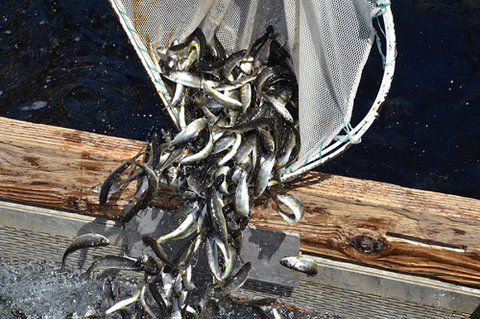 Posted at 15:51h in Environment, News by Danielle Parenteau-Decker 0 Comments

Children in the Richmond Police Activities League will be watching the release of 200,000 juvenile salmon during a boat ride Sunday evening.

The event marks one of the last releases by the California Department of Fish and Wildlife that began in March. In a series of releases, the department has been transporting 19.7 million hatchery-raised fall-run and 960,000 spring-run salmon smolts to the San Pablo Bay, San Francisco Bay and seaside net pens.

Approximately 13 children will have the opportunity to watch smolts released from three tanker trucks close up from the water.
“It’s great to provide a fun learning opportunity for kids to get to know their local waterways and wildlife,” said John McManus, Golden State Salmon Association president. The organization identified the Richmond site for salmon release and helped organize the event.

The smolts were raised by the California Department of Fish and Wildlife in its Feather River hatchery. The department previously released fish at sites near Vallejo, but experts have discovered the fish may be exposed to many predators as they swim through the San Pablo Bay to the Pacific Ocean.

The consecutive years of drought also prompted the department to find new locations for fish releases. The Central Valley rivers have become too low, and the conditions can be lethal for young salmon combined with warmer water temperatures as they try to emigrate to the ocean.

They are supposed to get flushed out to the ocean with runoff and spring snowmelt, but it has become insufficient downstream due to the drought.

This year, the conditions are considered particularly poor, forcing the department to truck more than 95% of their smolts and move them further west to bypass 50 to 100 miles of hazardous river conditions.

“Trucking young salmon to downstream release sites has proven to be one of the best ways to increase overall survival of hatchery-produced fish and contribute to adult returns in the coming years,” said Jason Julienne, hatchery supervisor, in a statement.

The Richmond site is one of the newly identified sites where the smolts can survive in higher numbers.

The release has to be held after dusk to avoid potential bird predators. On Sunday, the charter boat Salty Lady will pick up the group at 7 p.m. at Richmond’s Marina Bay harbormaster dock and return at around 9:15 p.m. The fish release will happen at 8:45 p.m near 1500 Dornan Drive.