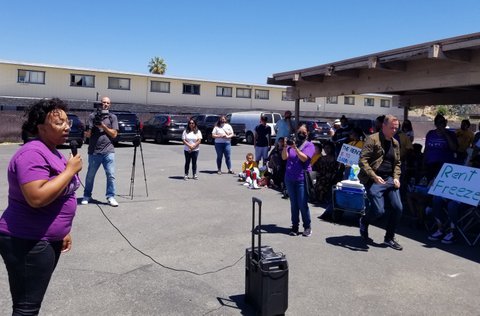 The Antioch City Council on Tuesday night instructed the city attorney to craft an ordinance allowing rent stabilization in order to clamp down on unethical landlords while keeping rents affordable for people still affected by the post-pandemic economy.

“It looks like rent stabilization will be soon the law of the land in the city of Antioch,” said Mayor Lamar Thorpe, before adjourning Tuesday evening’s special meeting.

The council chamber was full and more than two dozen people spoke, nearly all asking for help from the council.

Tenants and tenants’ rights advocates have demonstrated as recently as July 21 at the Casa Blanca Apartments on Claudia Court, where more than 70 people gathered to show frustration with rent hikes as high as 30% at the complex and its sister property, Delta Pines.

Tenant activists say about 150 people were served with rent increase notices at both properties, and many could end up homeless.

Several people asked for an emergency ordinance freezing rent increases and a moratorium on evictions.

Thorpe and council member Mike Barbanica both pointed out Antioch — unlike charter cities like Oakland, Berkeley and Richmond — is a general law city without the same flexibly to enforce rent moratoriums without the state’s backing.

Barbanica suggested renters contact the city’s code enforcement people to inspect units where landlords allow conditions to deteriorate to the point of having habitability issues.

He also suggested that the city can contact the county district attorney over claims of price gouging.

“Listening to somebody who has a $1,200 or a $1,400 rent on a property, then getting a rent increase of $500 is ridiculous,” Barbanica said. “We’re just coming off COVID. We’re just coming off a state of emergency. Now we have people getting a 500 (dollar increase)? What’s that equate to — a 30 or 40 percent increase? That’s absolutely ridiculous.”

Council member Tamisha Torres-Walker who, along with councilmember Monica Wilson, has advocated for tenant protections since August 2021, said she’s concerned for renters that they could’ve helped a year ago.

“Rent stabilization and preventing displacement is so important and, even though we are a general law city, we can stop dragging our feet and do something now to help people stay in their homes,” Torres-Walker said. “It doesn’t look like we have the courage” to pass an emergency rent freeze or eviction moratorium.

Thorpe said he was “about to fall off my seat” at the council’s willingness to move forward.

“It’s a complete turnaround from some members of the council, who have been opposed to this in the past. But I’m grateful.”

Thorpe said he first supported rent control for seniors living in a mobile home park but couldn’t get support from his colleagues.

“Now we’re here years later and I’m hearing people who were on the complete opposite side of rent control saying they want to advance it, so I’m excited,” he said. “That’s great news … I can’t believe that is happening, but it’s amazing what an election year will do.”

City staff aims to have an ordinance ready for a first reading and vote at the council’s Aug. 16 meeting. Thorpe also suggested the city explore creating a rent stabilization board to enforce the ordinance.