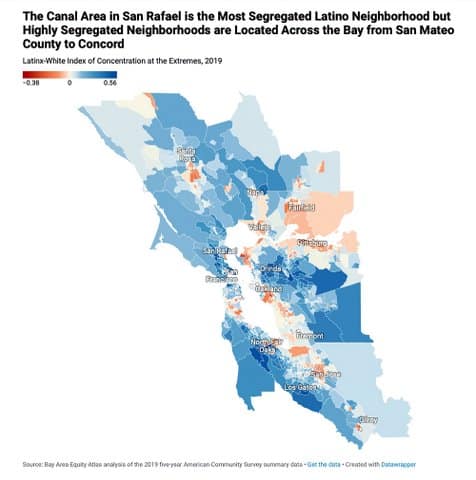 Posted at 07:43h in Bay Area by Danielle Parenteau-Decker 0 Comments

The report is based on an analysis of U.S. census data down to the census tract level that compares population numbers by race and income. The Bay Area Equity Atlas is a partnership between the San Francisco Foundation, PolicyLink and the Equity Research Institute at the University of Southern California.

Five of the Bay Area’s 1,572 census tracts are identified in the report as “highly segregated” areas for low-income Latino households.

These neighborhoods were in Marin, Alameda, Contra Costa and San Mateo Counties.

The region’s most segregated Latino neighborhood is in San Rafael’s Canal Area, according to the report which was posted July 27 on the Bay Area Equity Atlas website at bayareaequityatlas.org.

The other highly segregated Latino neighborhoods identified in the report are located in East Oakland, South Concord near Four Points, North Fair Oaks in San Mateo County and in Richmond.

A full version of the report can be found here: https://bayareaequityatlas.org/mapping-segregation.