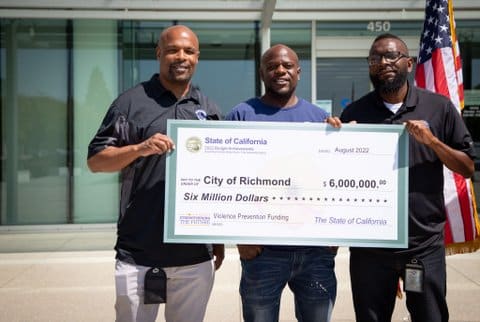 Office of Neighborhood Safety staff members pose Monday with a check symbolizing the $6 million grant the agency received from the state of California to continue its gun violence prevention work.

Story and photos by Amaya Edwards

The city of Richmond’s Office of Neighborhood Safety will receive $6 million from the California Violence Intervention and Prevention Program. This money is to be used by ONS to continue its violence prevention efforts in the community.

“You know, at the end of the day, the truth of the matter is that gun violence impacts all of us, some more than others,” Wicks said.

Wicks pushed to have the CalVIP program codified into state law in 2019. She has continued to work on this issue since, championing CalVIP and annually asking for more funding for this statewide program.

In his remarks, Mayor Butt spoke about Richmond’s history of innovative violence prevention, which he said started with then-Mayor Irma Anderson, who was a public health nurse.

“We had always looked at violence as a police issue, law enforcement issue,” he said. “It was her idea to look at it through the lens of a public health issue. She convened some workshops… and this evolved ultimately into the Office of Neighborhood of Safety. We believe it was and is a very effective program.”

Richmond City Council voted to create the Office of Neighborhood Safety in 2007 because of the high levels of gun violence at the time. The office was reportedly the first of its kind in the country. It has received funding from CalVIP since 2008.

Other speakers praised Richmond and the community for continuously trying to find and use innovative strategies to solve this issue of gun violence.

Sam Vaughn, deputy director of ONS, said Wicks is committed to fighting for more funding, especially when it comes to serving the Black and Brown communities that predominantly make up Richmond and cities like it. 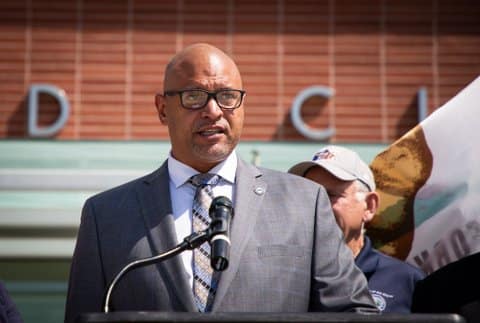 “The folks we deal with live in the dark, so we got to go into the shadows and meet them where they are,” said Office of Neighborhood Deputy Director Sam Vaughn.

“The city of Richmond put in the initial investment to get staffing, but we realized that resources were very, uh – they definitely weren’t rich in the communities that we were serving,” Vaughn said. “We’re serving a community that has been denied basic fundamental support.”

Every dollar, outside of mandatory evaluation costs, will be put right back into the community, according to Vaughn. Some examples include providing resources for ONS hospital-based interventions, re-entry services and diversion programs.

While some of this money will be used to continue ONS outreach, some of it will be used to expand the program in ways that hadn’t been done before because of the lack of funding and resources.

“We’ve never had the resources to be able to deal with the Latin population here,” Vaughn told Richmond Pulse. “Now, we have extra resources from the general fund where we can hire Latin-specific outreach workers, and we will have resources for them.”

He said that in the past, 85% of victims and suspects involved in gun violence were Black, but that has changed.

“It’s different now, the Latin population is about 45% of that gun violence now. So now we have the opportunity to invest in them as well,” he said.

He added that unhoused people are involved in 10% of gun violence, so ONS plans to invest in working with that population as well.

“And we’ve seen a lot of guns being found on young people,” he continued. “There’s been shootings in high schools.”

ONS builds partnerships and creates strategies to reduce gun-related injuries and deaths, working to create lasting change in Richmond, according to Vaughn.

Vaughn said that some people may not see the work ONS does, but it doesn’t mean it isn’t happening.

“We think of ourselves like the CIA. Because, you know they exist, but you don’t have a clue how they’re successful. We’re in the background. We’re where folks don’t go,” he said. “The folks we deal with live in the dark, so we got to go into the shadows and meet them where they are.”

Vaughn said that includes going to the projects, “behind the townhouses … in the middle of the ghetto … driving up and down the main street.”

Hiring staff and team members who are from Richmond and understand its complexities, like program manager James Houston, is necessary to keep this program running.

“When we started to engage with these young people, it was difficult,” Houston said. “They ran. They didn’t want to speak. They thought we were the police.”

Over time, though, Houston said he and other ONS team members have seen young people grow into active community members by participating in the program.

“Many of them come on their own. We don’t have to go pick them up,” Houston continued.

According to ONS’ annual summary for 2020, the most recent year available, the agency prevented 28 firearm incidents that year.