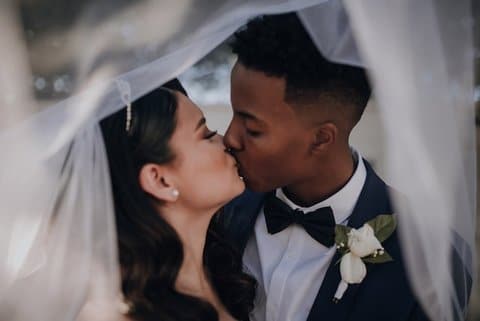 After the U.S. Supreme Court overturned Roe v. Wade, many people began to worry what other landmark civil rights cases could be reversed too.

Prompting many of those concerns was an opinion written by Justice Clarence Thomas. It cast doubt on Obergfell v. Hodges, which legalized same-sex marriage in 2015, and Loving v. Virginia, the 1967 ruling legalizing interracial marriage.

In 1948, a Mexican American woman legally considered white and a Black man in California wanted to marry, but that was illegal at the time. They fought the law, taking their case to the state Supreme Court. The 4-3 ruling in Perez v. Sharp ultimately made California the first state to lift its interracial marriage ban. California’s precedent would influence the landmark Loving ruling nearly two decades later.

Marriage between people of different races has steadily gained approval over the years since Gallup started measuring this in 1958. Then, just 4% of Americans were in favor compared with 94% in 2021.

On Aug. 5, Ethnic Media Services looked at the current role of race and politics in relationships, hosting “Interracial Marriage In a Polarized America” with academics Justin Gest and Dr. Alison Skinner-Dorkenoo and multicultural-multiracial couple Sonia Smith-Kang and Richard Kang.

Gest, an associate professor at George Mason University’s Schar School of Policy and Government, said political affiliations have become influenced by social identities, such as race and gender. Gest says politics in the United States have become polarized as a result, with Americans of differing ideologies becoming more divided.

Gest said statistics show Americans have become less willing to date or socialize with people who have ideological preferences different from theirs.

“Unfortunately, that is really no way to actually build bridges across a single nation,” he said.

But interracial marriage can help bridge some gaps.

Gest authored “Majority Minority,” a book examining how six societies have embraced demographic change and the effects on the political landscapes.

“Looking at the countries that I’ve studied and across their various histories, when people are inter-marrying, it disarms the politics of polarization and division,” he said. “The reason why is that those politics rely on very clean lines between groups.”

Gest brought up contact theory as one strategy to bring people together across social lines. Contact theory hypothesizes that meaningful interactions or relationships with individuals of different social identities can combat bias.

“These relationships — whether you are married or not, just a friend, neighbor or co-worker or member of your church — transcends and blur those boundaries,” Gest said. “They don’t allow politicians and others, fear-mongers, to divide us on those boundaries.”

The debate continues around contact theory. It has largely been studied in people under 25, including children and university students. Gest said it is challenging to study older adults.

“We don’t think of contact as necessarily a goal; we think of it as a circumstance, something that just happens,” Gest said. “We need to cultivate it. We need to cultivate pluralism — that means not residentially or scholastically segregating — and actually trying to find ways to come together so that we can empathize.”

>>>Read: What the Pandemic Means for Love and Marriage

Dr. Alison Skinner-Dorkenoo, assistant professor of behavioral and brain sciences and social psychology at the University of Georgia, examined public reactions to interracial marriage in a 2019 study. She found exposure in general social environments did not influence attitude. However, personal experience and close connections with interracial couples increased positive attitudes.

“Power was concentrated among a really small sample of the population, which was wealthy, white men,” she said. “To hold onto that power, it would benefit them to create divisions to prevent the other groups from allying with one another.”

There are still those today who want to keep those divisions in place.

A preference for this hierarchical social structure was found within the study’s sample of 505 white men in the U.S. Unsurprisingly, the men who showed that preference also showed negative attitudes toward interracial couples.

However, Skinner-Dorkenoo and her colleagues found that there was bias against Black and white couples among all groups — except the sample of 284 multiracial adults in the study, whose biases were in favor.

The U.S census found that the multiracial population went up 276% between 2010 and 2020. The increase is based partly on recent birth rates. But another factor is that people have become more comfortable identifying with more than one race. Gest predicts this will continue to grow over time.

Census data also reported that 80% of mixed-race individuals have one white parent, highlighting the rarity of interracial couples with two non-white partners.

Sonia Smith-Kang, who is Black and Mexican American, met her husband, Richard Kang, in Los Angeles. Kang was raised in a Korean American household.

“Together, we have four children that we are raising intentionally in a multicultural, multiracial, multilingual household,” said Smith-Kang. She created Mixed Up Clothing, a children’s clothing business, as a reflection of their family.

Smith-Kang said it was easy to present their relationship to her family. The couple faced pushback from his family, however.

“It felt like there was no resolution at the time,” Kang said. “It was a crossroads that we [were] at. I knew it was one that I would have to bear. I was going to marry Sonia whether my parents accepted it or not.”

Other interracial couples assured Kang that having children would change his parents’ attitude. But he was skeptical.

“It was really not until they met their grandchildren that they opened their hearts to us,” he said.

Given the changes in recent data, the panelists did not indicate that the U.S. Supreme Court poses as a significant threat to interracial marriage. But even where there are signs of progress, Skinner-Dorkenoo and Gest noted that backlash and hostility remain.