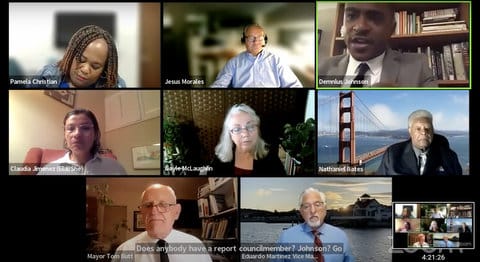 21 Sep With Encampment Closing Soon, Some Unhoused Residents Still Have Nowhere to Go

Because some residents of the Rydin Road encampment would have nowhere to go when it closes, City Council member Gayle McLaughlin proposed extending the deadline to leave. (Screenshot captured by Julia Métraux / Richmond Pulse)

The Rydin Road encampment where some of Richmond’s unhoused residents live is set to close in less than 10 days, but just 13 out of 28 residents have what the city says is a viable plan to move on.

The plans need to be approved by the city. Three are under review. One option could be moving in with a family member.

“We anticipate that over this next week [that] we’ll be able to approve several transition plans,” said Lina Velasco, the city’s community development director.

At Tuesday’s City Council meeting, the main focus was the closure of the Rydin Road encampment, as well as providing funds to help unhoused people. A motion was introduced to designate the Housing Consortium of the East Bay to distribute the already allocated $50,000 to Rydin residents, as well as up to $250,000 to support them in measures like paying rent in the immediate future.

Almost all members of the City Council raised concerns about the ability to close the encampment without leaving people who are struggling just to be evicted.

“I think we need to extend the sunset deadline, if needed, into October, but no later than Oct. 21, for those who have a legitimate reason,” council member Gayle McLaughlin said. “There’s all these transition plans that city staff has to approve and paperwork, and we couldn’t even get the contract executed in a whole month.”

During public comment, Jessi Taran, who lives at Rydin Road, alleged that Mayor Tom Butt had distributed information about where people living in RVs and other vehicles could move their vehicles in Richmond, with the addresses being where some of the members of the City Council live. Council member Melvin Willis said this action was inappropriate.

“If the mayor actually did send out our addresses as list of potential safe sites, that is not true leadership,” Willis said. “I want to apologize on behalf of the City Council to y’all for that happening.”

Butt did not directly respond to the allegations that he had done this.

After an initial discussion about Rydin Road from City Council members, Rydin Road residents spoke about barriers they faced when leaving the encampment.

Amanda Jenkins, a resident who had received a temporary placement at a local Marriott from January until April this year, described difficulties she faced in getting her Social Security card, which she needs to get Section 8 housing.

Jenkins now does not know what to do after the closing of Rydin Road. Four residents currently have no plans, according to the city of Richmond, about what they will do after the encampment closes.

Vice Mayor Eduardo Martinez said that the city staff, as well as the county, needs to have better communication with unhoused residents in Richmond in order to better support them.

McLaughlin introduced a motion to approve the terms of the original motion brought to the meeting, with the stipulations that some exceptions to the closure could be made for people with extenuating circumstances, as well as a requirement for staff to approve or reject transition plans 48 hours after they were received.

The motion passed 5-2, with Butt and council member Nathaniel Bates voting against it.