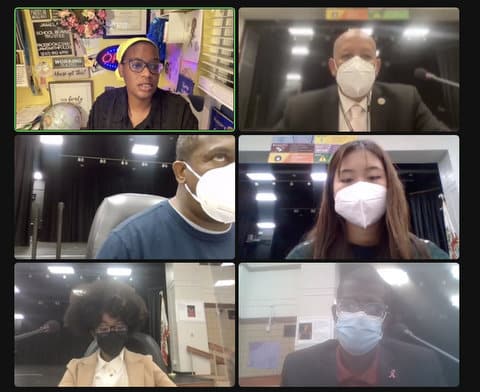 People again asked the West Contra Costa school board why Bright Futures, which provides academic and social support primarily to Black students, has not had its contract with the district renewed. (Screenshot captured by Julia Métraux / Richmond Pulse)

Nearly a month after heated conversations on the same issue, Bright Futures Growth and Development Center board members, parents and students again asked why its contract with West Contra Costa Unified School District was not renewed.

Bright Futures and the school district’s contract expired in June 2021. The center offers students services including academic assistance and social activities. At a school board meeting in September, Bright Futures Executive Director Ivy Winston said that 98% of students supported at Bright Futures are Black.

>>>Read: Black Education Is Key Focus of School Board Meeting

Ernest Holloway, a parent of a high school student whose daughter has been employed by Bright Futures over the past two summers, said programs that support Black families deserve to “not be stepped on.”

“I understand that the Black community in Richmond is small…maybe that may have something to do with why they’re cutting back some of their funds,” Holloway said. “They [Bright Futures] deserve to get the same love from the board members of the school board that Bright Futures gives to our kids.”

Bright Futures President Idrissa Lattier also asked to be excused for the language she used when discussing her frustration with the lack of a contract at a Sept. 7 meeting, which included referring to Superintendent Kenneth “Chris” Hurst as a “Black puppet.”

“I could have used better vocabulary to illustrate my deep disdain for the mendacious statements and actions of our superintendent,” Lattier said.

Lattier disagreed with statements from the district that Bright Futures had not followed protocols to renew a contract.

“I had an email where you said thank you for meeting with us, and other emails from the seven meetings that we’ve met with your office in the last year and a half,” she said.

When the school board was going through the consent calendar, trustee Mister Phillips said he hopes to see an item continuing the work between the district and the center.

“It is my hope, that at some point, we do see a contract with Bright Futures on there,” he said.

Clerk Demetrio Gonzalez-Hoy and trustee Leslie Reckler, who is Jewish, were absent during the open portion of the board meeting, though Gonzalez-Hoy was present during the closed session. Wednesday’s meeting occurred during Yom Kippur, which is a Jewish holiday.

The West Contra Costa Board of Education passed a resolution recognizing the week of Oct. 9 to Oct. 15 as the “Week of the School Administrator.”

Trustee Jamela Smith-Folds, after voting for this resolution, said, “I want us to be just as much as a champion for our site administrators and our teachers and our staff as we are for everyone else,” noting that site administrators’ work often does not end on the weekend.

Agreeing with Smith-Folds, Phillips said site administration are in front of the same teachers and often parents every day, which is “a whole ’nother level of responsibility and accountability.”

“At the end of the day, they’re almost like, in my opinion anyway, little mini superintendents at their individual sites,” he said.

“The state of California is reimbursing us the difference between free and paid reimbursement, which is huge,” said Barbara Jellison, WCCUSD director of food services. “If they weren’t able to do that, we would most likely go into deficit and not be able to offer the meals that we do to our students.”

The next regular school board meeting is scheduled for Wednesday, Oct. 19.