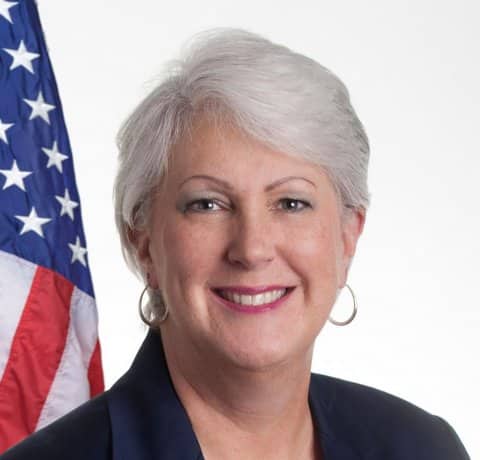 After decades of county service, Contra Costa County Supervisor Karen Mitchoff chaired her final board meeting Tuesday with tears, laughs and a few parting shots from her regular critics during public comment.

“We’ve been called communists, and today we got a new one: domestic terrorist,” Mitchoff said. “I’m keeping a list. It’s the only way you get through some of these comments.”

Mitchoff, who was first elected to the board in 2010, is known for cutting through the bureaucracy of local politics and getting to the point, often bluntly and passionately.

Mitchoff paused frequently Tuesday, getting choked up talking about working for a Martinez attorney straight out of high school, becoming a paralegal, and working for former county sheriff and state senator and assemblyman Richard Rainey. She later worked for former supervisor and now U.S. Rep. Mark DeSaulnier and former county supervisor Sunne Wright McPeak, who was at Tuesday’s meeting.

“If there is a measure of someone’s service in public that is the reflection of those people around you who paid tribute, then you hit the pinnacle,” McPeak said. “It was wonderful seeing everybody at your (recent retirement) celebration, with all five supervisors there, and to recognize your tremendous contributions to Contra Costa County.

“As Tina Turner had said, and you paid witness to all of us, you simply are the best,” McPeak said.

Other colleagues, past and present, praised her work ethic, tenacity, and focus on issues, from the environment to libraries to social services. County Health Services director Anna Roth said Mitchoff’s strong support during the COVID-19 lockdown was critical.

“You have helped save so many lives,” Roth said.

District 1 Supervisor John Gioia was absent, due to a case of COVID-19 severe enough to keep him from even joining remotely.

“The one (comment) that really stuck out was John’s comment about being in a fight and, to be in a fight, he would definitely want Karen to be on his side in that fight,” Glover said. “I’m reminded of that as on the various agencies and government bodies that she has served on down through the years, she has been a forceful leader and fighting for those things that she believed in.”

Pleasant Hill City Council member Ken Carlson won last month’s election to fill Mitchoff’s District 4 seat on the board, which includes Concord, most of Walnut Creek, Pleasant Hill, Clayton, and nearby unincorporated areas. Carlson said he knows he has large shoes to fill. Mitchoff was on Pleasant Hill’s Recreation and Parks Commission before being elected to the City Council and serving as mayor.

“Your friendship, your support of myself and the community, has been truly outstanding as well,” Carlson said. “As for the entire District 4 and the county and beyond when I think of the work you have done regionally across the Bay Area, it’s just truly outstanding and tremendous.”

“I look forward to getting to work and doing my best to continue that hard work for you.”

District 3 Supervisor Diane Burgis thanked Mitchoff for making her better at her job.

“I also want to recognize how you’ve grown people like I know that you were grown by Sunne and Mark and the sheriff and all of these people, but you’ve also paid it forward,” Burgis said. “You have paid it forward and you continue to pay it forward you’ve made me a better elected leader so I want to thank you personally for that.”

Mitchoff said she plans to spend time exercising, traveling to national parks, and will adopt a dog. She also referred to earlier public speakers accusing the board of being part of election and vaccine conspiracies in warning of a growing danger in local politics.

“I am very concerned about the future of those willing to serve at the local level in appointed and elected offices,” Mitchoff said. “We all know individuals who we believe would be great public leaders, but when we go out and ask them would they consider it, it used to be the concern was ‘I don’t know if I can raise the money to be able to launch a viable campaign.’ Now it’s ‘I wouldn’t do that for anything.’

“We’re going to need people who are willing to step up and do the hard work,” she said.