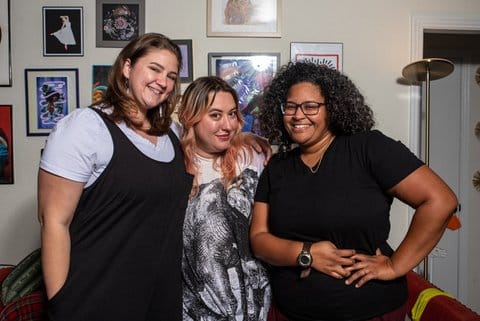 Jenn Hooker, “X” and Ashlyn Adams, who are in a relationship, say that buying a home together in Richmond deepened their commitment to each other and the Bay Area.

Editor’s Note: This is part of a series of stories looking at interracial marriage in California. Reporters from 20+ ethnic media outlets turned the lens on multiracial couples in their communities. The stories offer intimate portraits of how people from California—as well as from all over the world—find and marry one another, creating a cosmopolitan culture in the state that has never existed before. While racial hate continues to rise, the epic story in California is one of love across all color lines. Visit Ethnic Media Services’ California Love Stories to see more in the series.

Ashlyn Adams, 34, and Jenn Hooker, 31 — a couple who are African American and white, respectively — have forged a happily unorthodox life for themselves in Richmond after struggling to gain acceptance outside the Bay Area.

In her childhood, Adams says her family was “not well-off financially.” They moved around the East Bay, living in Oakland, Richmond, San Pablo and Berkeley. She has nine siblings, and all but one still live in the Bay. While she was in high school, her father died and her mother moved across the country.

Through this, Adams remained in the Bay, got into UC Santa Cruz, and gained custody of two siblings. Her great-great aunt, who was in her 80s and living in El Sobrante then, helped take care of the siblings while Adams commuted to UCSC, where she studied film. Today, she runs a video store in Santa Cruz and produces independent films throughout the Bay.

Hooker was raised in Hayward by her mother, as part of a large Italian family. She is the third generation in her family to dwell in the Bay, and her upbringing was “relatively liberal.” Her parents divorced when she was very young; of her father’s family, she knows only that they are “tall white people.”

Hooker, who works in Mill Valley as a librarian, knew she wanted to be one in high school. She got her master’s in library science at San Jose State after studying film at UCSC, where she met Adams.

“In true queer fashion,” said Adams, Hooker’s ex introduced them. Adams would often rent movies from Westside Video, the same store she now runs; one day, her ex brought Hooker to a queer movie night that Adams hosted. In Hooker’s words, “sparks flew”; in Adams’ words, “she ignored me for a year.”

Adams wooed Hooker throughout that year. Nevertheless, given that Adams’ upbringing was “like a United Colors of Benetton ad,” she was initially unsure — despite her attraction to Hooker — whether they could deeply connect.

Regardless, the two soon discovered how much they had in common — they were “both huge film and comic book nerds” and had known many of the same people growing up.

Their respective upbringings also brought marked differences to light. For one, Hooker was “raised to bite [her] tongue,” whereas one of the qualities she most admires about Adams is “that she will say what’s on her mind, no matter who she’s talking to.”

Conflicts between the couple and others around them were harder to grapple with than any differences between themselves. Hooker recalled encountering the reality of their situation as a queer interracial couple while receiving hard stares from passersby in a Walmart in Vacaville.

On another occasion, when the two were preparing for a trip to New Orleans, Adams told her: “You can’t hold my hand there.” Hooker was incredulous: “It’s a melting pot of a city; I couldn’t believe that we’d run into problems for being gay.” Adams said: “It’s not because we’re gay. It’s because you’re white.”

What most eased the tensions which Hooker and Adams faced as an interracial queer couple was their move back to the Bay from Santa Cruz early this year, when they bought a house in Richmond.

“Eighty miles made a huge difference,” said Adams. “I was the only visible Black person in my department at UCSC. It was like being in the snow.”

“With more visual variation here, people don’t stare at us,” Hooker added. “That makes a big difference in how comfortable we feel.”

In fact, all that they wish could change is the cost of living. Indeed, money presents another point of difference between the two: Hooker, three years younger than Adams, holds a higher degree and makes a higher salary.

On the one hand, Adams said, “That looks a certain way. People who look like me generally have less generational wealth and support. On the other hand,” she joked, “get yourself a white sugar mama.”

In the 13 years that Hooker and Adams have been together, they feel they have not changed so much as matured together. “The consideration we give one another has grown deeper,” said Hooker.

Nevertheless, one addition has brought vast change to both of their lives: a third partner, referred to here as “X.” X, who wished to remain anonymous, lives with Adams and Hooker, having helped them buy the house. She is white and of partly Asian descent. 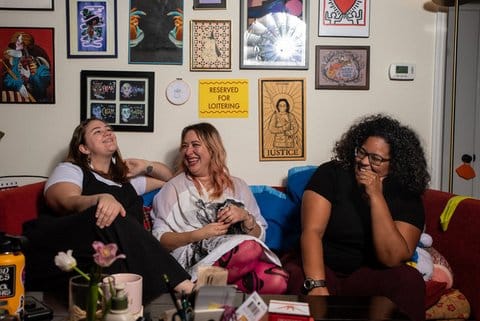 Jenn Hooker, “X” and Ashlyn Adams are in it for the long haul or “for at least the length of the mortgage” on their Richmond home, Hooker joked.

She grew up in Hayward, near Hooker, and met her at their mutual workplace nearly three years ago. It was X’s and Adams’ desire to return to the Bay from Santa Cruz that impelled the move. Hooker was initially ambivalent, but the three decided to buy a house together.

The dynamic of their atypical lifestyle is situational, though they usually feel comfortable showing affection in public. Hooker is out at work and to her immediate family, “which is a great feeling,” while Adams maintains a “don’t ask, don’t tell situation” with her family.

In one sense, the addition of a third partner clearly presented a radical change to the structure of their relationship. However, Hooker and Adams repeatedly affirmed that, in another sense, including X in their relationship only deepened and broadened the affection that was already there.

Given that they bought a house together, Hooker joked, they’re all “in it for at least the length of the mortgage.” Adams added, “Decisions are two-against-one. It works well when deciding where to go for dinner.”

“Committing to each other and living in the Bay were choices that paid off deeply,” Hooker said. “It’s taught us a lot about reconciling different perspectives … and it also turns out we’re in love, or whatever.”