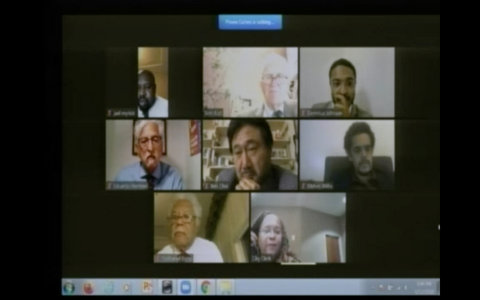 Posted at 22:40h in City Government by Pulse Editor 0 Comments

The council proceeded, line by line, through 16 ideas to reduce the budget, which would add up to savings of about $19.5 million, with few comments on the majority of them.

The items that received the most attention were partial or full closure of libraries and splitting the cost of upgrading Information Technology infrastructure over five years, instead of one.

According to a staff slideshow before the meeting, the council’s goals are a structurally balanced budget and to preserve services as much as possible, minimize staff reductions, consider effects of the Covid-19 pandemic on services, and increase cash reserves to levels outlined in policy to maintain bond ratings.

Even with the changes, the council is still short about $7.5 million. The council didn’t go over “meet and confer” items Tuesday, which would require union concessions.

“We are not going to have a balanced budget without either union concessions or layoffs,” Mayor Tom Butt wrote in an email Wednesday. “It would require laying off about 40 positions to make up the $7.5 million. We are at the rock and the hard place.”

In the email, Butt also argued against spending down, or intentionally depleting, reserves too much to meet the deficit. Butt wrote that the council was against reducing the $12 million in reserves by $5.5 million, as an attached union memo suggested.

That would likely cause the city’s bond rating to plummet, increasing costs in the long term. He argued that if there were an emergency, such as a resurgence of the coronavirus, the city would quickly run out of money, among other issues.

The potential library cuts, along with closing pools and laying off workers, are only to be considered once other options have been exhausted, according to agenda documents.

About $5.3 million could be saved if the libraries were shut down entirely, though no councilmember supported such an action. The council showed more interest in reducing some services and shutting down the Point Richmond and Bayview branches, which could save about $1.43 million.

Butt said that Richmond was unique in having three libraries for a city of its size. He said Concord, a larger city, only has one library, which he said was typical.

“How we go into the branch library business, I don’t know,” Butt said.

Several councilmembers pushed back against the mayor.

Councilmember Eduardo Martinez said Berkeley was a comparable city and had more branches than Richmond.

Councilmember Demnlus Johnson said Concord had a more homogeneous community than Richmond, and the branches were created for access reasons.

Councilmember Melvin Willis said he supported leaving the library question alone entirely. He said there’d been a lack of investment in libraries already, and a branch closure would create a feeling that the city won’t invest in libraries anymore. Closing branches would also cage communities in and limit library access, he said.

Councilmember Jael Myrick said he was absolutely opposed to closing the library entirely but that the item needed to remain on the list. He said the council needed to support its libraries where it could, but the budget crisis was severe enough to warrant looking at branch closures.

Councilmember Ben Choi reiterated that the closures would only be truly considered after other options have been exhausted. He said everyone could see the value of libraries, and the closures were at the bottom of the council’s list. Even so, the council needed to keep the item on the list.

“It’s way too premature to be entertaining the idea of really massive things like full library closures, but, at the same time, we have to, in good faith, keep this on the list,” Choi said.

Most of the public comments urged the council not to close libraries.

Tarnel Abbott, who holds a master’s degree in library information studies from UC Berkeley, said there were many tasks the library staff could still perform with the buildings closed, such as Zoom appointments to help people fill out unemployment and job application forms, story times via KCRT television and tutoring.

“The library is the only educational institution that the city has,” Abbott said. “Its role as keeper of culture, history and knowledge is invaluable.”

Upgrading the city’s IT infrastructure would cost $4.3 million, but the city can extend that cost over five years, paying about $1.3 million a year.

The infrastructure hasn’t been upgraded since it was first implemented in 2008, said IT director Sue Hartman. Desktop computers used by city staff are over nine years old, which increases security risks.

Upgrading the system, Hartman said, would result in less downtime from the city’s network, as well as expanded services for city staff.

“I’m not willing to kick that can down the road,” Johnson said

Ben Therriault, president of the Richmond Police Officers Association, argued against the upgrade. He said city staff have had crummy computers for almost a decade, but the economic catastrophe caused by the coronavirus outbreak outweighed the need to upgrade.

“One more year for some computers versus some jobs is an easy call,” Therriault said. “The systems can wait.”