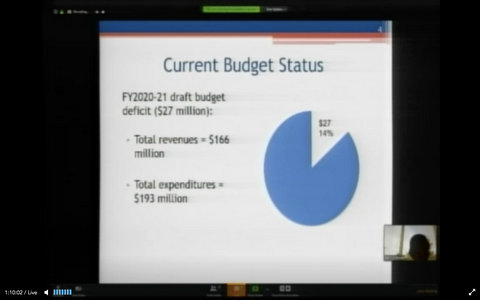 Posted at 18:35h in City Government by Pulse Editor 0 Comments

The Richmond City Council on Tuesday heard an update on a $27.1 million budget shortfall for fiscal year 2020-21, resulting from lost revenues during the coronavirus outbreak.

Additionally, the council approved a plan to shift state money dedicated to a safe parking program for homeless people — planned to be located in North Richmond — to instead support ongoing efforts by Contra Costa County to house at-risk homeless people in hotels and motels while the pandemic lasts.

The council will have to agree on strategies to fill the gap in the coming weeks, before approving the final budget in June. City staff and an ad-hoc budget committee, composed of Mayor Tom Butt and councilmembers Melvin Willis and Ben Choi, have been working on ways to craft a new budget since mid-April. Butt said the committee has met three times so far and twice with representatives from city employee unions. The committee will continue meeting regularly, Butt said, for about the next two months until it has agreed on a budget.

The mayor also announced that two special city council meetings, on May 12 and June 9, would be added to the council agenda so the council can go through potential budget reduction.

“So far, this has been the most transparent budget process that I’ve seen, maybe since I’ve been on the city council,” Butt said.

Butt divided the budget into four categories, or “buckets.” The first bucket, which includes services, programs and purchases, contains $14 million to $21 million which could be cut — though $4 million of that would involve the complete closure of libraries, he said.

Bucket two includes “meet and confer” items, with a range of $7.3 million to $10.9 million. Bucket three involves hiring freezes, which could save about $6.2 million (money for empty positions is included in the tentative budget, and though some positions have to be filled, others don’t, according to Butt).

Bucket four is the city’s reserves, which stand around $12 million, the mayor said. Bucket five is layoffs, “which nobody wants to go to,” Butt said, with each potential laid-off position averaging $196,000.

Butt said the funding gap of $27.1 million could be met with the minimum in cuts from the first three buckets. He warned that cuts not made would have to come from elsewhere.

“If we don’t touch one bucket, or if we don’t dip into one bucket significantly, it means the other buckets are going to have to make up the difference,” Butt said.

City Manager Laura Snideman called for the council to think about structural solutions over one-time solutions, which she said Richmond had a history of using. She said with the coronavirus outbreak, the city’s ability to continue depending on one-time solutions was likely more limited than it had been in the past.

“The reality about the deficit in our budget both in the current fiscal year and the next fiscal year is extremely significant,” Snideman said. “It is going to take a lot of leadership and a lot of conversation to be able to solve the issue.”

Sean Stalbaum, a representative of the International Federation of Professional and Technical Engineers Local 1021, called on the city to adopt a “no immediate labor cuts” approach to their reductions. He said the pandemic differed from a typical economic downturn, and that it wasn’t the right time for the city to pursue major structural changes.

Stalbaum urged the city to make nonlabor expenditure reductions, spend reserves where it could and raise revenues in creative ways. He said layoffs would worsen the economic effects of the pandemic and strip the city of essential services when they’re most needed.

“Now is when the city should aim to kick the can down the road some,” Stalbaum said.