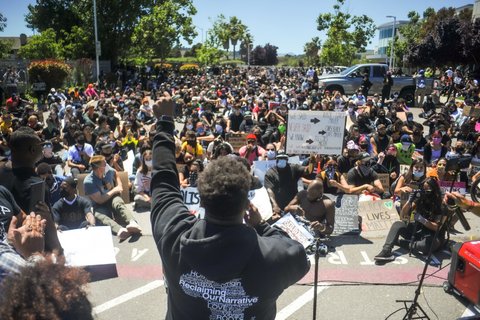 11 Jun Youth Perspectives: Making Sense of the News and Protests

Posted at 18:06h in Commentary, Youth by Pulse Editor 0 Comments

Editor’s Note: People are protesting police violence amid looting, curfews, and the COVID-19 pandemic. Richmond Pulse asked some local students to tell us the people, sources, and tactics they rely on to understand our current situation, as well as their perspectives on protesting.

During these uncertain times, I’d like to say that I was able to turn to my parents, but that wasn’t the case. I often find myself feeling more secure when I discuss these topics with my friends. I can’t count how many times I feel uneasy hearing hopeless sentences come out of my parents’ mouths. I haven’t watched the news for a couple years now. But the news is like church for my parents — the first thing they look at when they wake up. It’s very difficult to find any common ground when discussing the news with my parents. A lot of the time, I turn to myself to make sense of a lot of things.

I protested last Tuesday in honor of George Floyd and the countless other innocent African Americans whose lives were taken by murderous police officers. I believe if you aren’t against [something], then you support it. I don’t want to be someone who said they wish they did something when they could’ve. I won’t stand for it. My dad was mad at me for protesting, but I’m not protesting for him [or] myself. I’m protesting for the innocent lives taken by a corrupt system. No way they can just get away with murder like that. I get flashes of anger as I type this. There must be justice for those families, those kids without parents and those parents who lost their kids. I want to use my voice for the unheard and the silenced. — Juan Mendoza, 19.

Trying to make sense out of a situation like this isn’t easy. Going on social media and turning on the news to see another black person get their life taken away [by] a police officer isn’t understandable. People whose job it is to protect us are attacking, beating and murdering people. As a person of color, it makes me fear the police, and I couldn’t even imagine how it makes Black people feel. I agree with the protests; I agree with the riots and the looting because there can only be so much peace. There have been peaceful protests, and although that sends a message, the system doesn’t listen. Without making noise and showing the anger we are feeling because of what’s been going on, there will be no change. BLACK LIVES MATTER.

Although I have not personally been protesting, I am spreading information on social media and trying my best to educate some of my peers who simply don’t understand that it’s not about “all lives matter” because all lives aren’t the ones being killed — it’s the Black people who are treated unfairly by authorities, and it has to be stopped. I stand with BLM.” — Chris Mendizabal, 17.

“Watching the news on TV isn’t enough. On Twitter, everything is raw and there’s so much more than what they cover on the news. My Twitter timeline is just full of Trump, the BLM movement, looting, and so much more. It’s overwhelming, but it’s necessary to keep us informed. It’s necessary because racism shouldn’t even be an issue anymore, and we’re just trying to be heard.

It all started as a peaceful protest for the death of George Floyd. I find it funny how there were white people protesting because they wanted to get haircuts. But did we see cops shooting them with rubber bullets? No. Once we wanted to be heard about how it was horrific and disgusting for a Black man to have his life taken away by a cop, did we get shot with rubber bullets? Yes. It’s so wrong on so many levels. It honestly makes me sick.

Don’t even get me started on Trump, he’s hiding in his little bunker, doing everything absolutely wrong. It’s sad how he’s even the president. ‘The whole world is laughing at us…’ President Trump said. Meanwhile, New Zealand, England, Germany, Spain, etc. are standing with us and supporting the BLM movement.” —Dariana Ortiz, 16.

“My friends are keeping me on track with what’s going on in the world. I’ve been super asocial these past few months, especially with the disappointment that was my graduation from community college. (Not that anyone can be blamed for that.) Recently, I’ve just been gaming nonstop, writing stories, and expanding my creative mind. I’m finding new ways to enjoy myself. Staying away from sensationalism and drama is what’s keeping me sane.

I have not been protesting. I’m helping out by discussing how important these protests are and how they are important demonstrations of basic human rights.” —Ronvel Sharper, 21.

“With everything going on right now, it can be difficult to know what is true. As we know, not all news sources are reliable. I am making sense of everything is by doing my own research, as well as following many sources through social media. Social media allows people to share their personal experiences, livestreams, and footage of everything. I find that with a mix of social media, online news sources, and the news or radio stations, I can put the pieces together and figure out what the real, true story is.

I have been protesting, however, not in the typical form of marches or walks. My protesting has been done from home through social media posts. I’ve done my best to create posts that are educational or that show solidarity with the Black community. I’ve done this to educate friends and family who follow me, as well as present my views. Many times, friends would ask to have a conversation about a post, and I am more than happy to have a safe and civil discussion. I find that to create change we must begin with those close to us. I have also signed many petitions and shared those with friends, so they may sign as well.” — Maryalexis Gutierrez, 20.