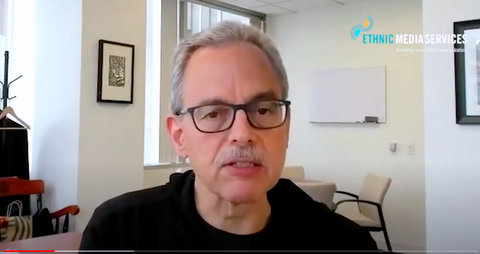 “Policing is just the tip of a racist iceberg,” said Manuel Pastor, a professor of sociology at USC, during a teleconference sponsored by Ethnic Media Services. (Screenshot)

Protesters demanding the defunding of police departments are also demanding that law enforcement replace its warrior mentality with a focus on keeping communities safe, a civil rights activist said Friday.

“What the marchers are marching for is revoking their consent for aggressive enforcement,” Connie Rice, cofounder of Advancement Project California, said Friday. “They are demanding safety, safety for the poorest of the poor, in the highest crime zones.”

Rice was one of four speakers in an Ethnic Media Services sponsored media teleconference Friday titled “Going Back To Normal Is Not An Option.” The speakers discussed police issues, emerging dialogues about race relations, the future of work and a troubling increase in COVID-19 infections.

That culture is deeply embedded in history, she noted.

“American policing descends from the slave patrols,” she said. “It’s a suppression-containment policing done to populations that are not meant to be part of the mainstream.

A serious overhaul of police departments is the only answer, she said

Professor Manuel Pastor of the University of Southern California offered his sociologist’s perspective on several shifts in the culture now underway.

“There are decades in which nothing happens and there are weeks in which decades happen,” Pastor said. “We’ve been in several of those weeks.”

But Pastor added that what we have been experiencing recently “has been decades in the making,” in helping to understand structural racism. At the same time, sophisticated social movements have developed and taken advantage of political opportunities for change.

“Policing is just the tip of a racist iceberg,” he said. “Beneath the policing are systems of inequality. It’s not just a question of penning people into communities but also penning people in economically and educationally.”

The arrival of the pandemic has shined a spotlight on all that, he says.

“It’s the disease that revealed our fundamental illness as a society, things like precariousness of employment for so many people, the racial wealth gap and the lack of assets,” he said.

But Pastor noted a recent shift among many people’s attitudes toward race.

Palo Alto futurist Marina Gorbis told reporters that a decade ago she was excited by new developments in technology and information-sharing possibilities because of open sourcing, Wikipedia and other public collaborative concepts being developed.

But, she said, as things progressed, things moved away from the idea of a commons system with societal benefits to what she terms a “plantation economy.” People working in high tech aren’t reaping a reasonable share of big companies’ profits.

“Just having technologies isn’t enough,” Gorbis said. “What we need is to develop a new ideology and a new set of norms.”

Among those new norms is to get away from turning every technological development into something that has to be marketed and profited from.

“We have these amazing technologies, but they are falling into business models. Frameworks that are anti-commons.”

She also said that amid the upheavals about policing and race relations, the time is right to take a hard look at the economy.

“It’s an opportunity for us to rethink the economic pillars that we think are normal, a rethinking of how we treat workers, what is deserved in this economy, who deserves these things,” Gorbis said.

Dr. Tung Nguyen of UCSF in his regular briefing to reporters warned of a surge in COVID-19 cases nationally, particularly in the South and Southeastern U.S.

“In Texas, the number of people hospitalized with COVID is now approaching 3,000 per day, doubling what it was about three weeks ago,” Nguyen said.