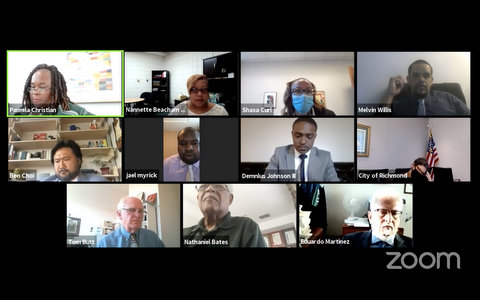 Posted at 12:40h in City Government by Danielle Parenteau-Decker 1 Comment

The Richmond City Council on Tuesday approved a budget for fiscal year 2020-21, successfully closing the remainder of a $29.5 million deficit.

Additionally, the council directed staff to look for policing models that would reduce the police force by the end of the fiscal year and established a public task force to oversee the process.

Over the course of June, the council gradually whittled down the deficit, ending up on Tuesday with $5.3 million left in reductions still to make. The council closed some of the remaining gap by spending down $850,000 in reserves; saving $400,000 by offsetting subsidies to community-based organizations by transferring them to the ECIA budget, not replacing some vehicles in the police and public works departments, adding up to $415,000; and saving $600,000 with staff reductions by attrition — meaning that employees retiring or leaving won’t have their positions backfilled.

City staff recommended the rest of the gap be filled with $3 million in union concessions, which have yet to be made. The council voted to reduce the amount of these concessions by removing all furloughs and by using the overtime budget — which stood at $6.4 million at the start of the meeting — to fill the difference.

The removal of furloughs and cut to overtime spending was approved alongside the budget on a 5-2 vote, with council members Nat Bates and Eduardo Martinez opposing.

According to the staff presentation, about 62% of the deficit was addressed by one-time fixes, leaving the city’s budget in a structural deficit that will later need to be addressed.

City accounting manager Antonio Banuelos said COVID-19 had caused a loss in city revenues of about $10 million dollars, with $7.4 million coming from losses in sales tax. He said the city didn’t expect these funding levels to go back to normal until next year.

Several councilmembers had concerns with the budget recommendations as they were presented and considered not passing it until later. Interim city attorney Rachel Sommovilla said not passing a budget by the end of June would violate Richmond’s municipal code. Mayor Butt said nobody liked the budget and the council wouldn’t be able to get the votes to pass it because nobody had been willing to compromise.

Brown said not passing a budget would suspend the city’s spending authority, which would soon result in city staff not being paid. Choi said he was more comfortable with passing a budget now, and later amending it, than assuming everything would be fine if they didn’t pass a budget. He suggested the council work it out.

Willis proposed there be no furloughs for staff members making under $90,000. Butt said he’d vote for a budget if it included a cut to overtime spending, which he said could replace the potential money saved through the recommended furloughs.

City manager Laura Snideman said she believed the city would not be able to meet the overtime reduction. The council had already voted to reduce the overtime budget by $1 million at a previous meeting, taking it from $7.4 million to $6.4 million. Additionally, much of the deficit was filled by freezing vacant positions, which Snideman has said at past meetings can lead to understaffing and mandatory overtime.

One area of particular concern for overtime spending is in the police department. In previous meetings, talk of overtime centered on the overtime spending that occurs from maintaining a required number of patrols at all times. On Tuesday, Interim Police Chief Bisa French said communications dispatchers currently work mandatory overtime because of a lack of staffing. Several dispatchers have left over the last year because of burnout, French said, and officers have also been paid overtime to backfill communications positions.

This has also led to the police department being out of compliance for some time with a state requirement that 911 calls be answered within 15 seconds, French said.

In other news, the council voted 5-2, with Butt and Bates opposing, to direct staff to prepare to transition from Richmond’s current policing model to a plan reducing the police force, returning with a preferred plan before the end of the fiscal year.

The council voted in the same motion to create an accountability task force for this process — made up of members of the public, the Richmond Community Police Review Commission, the Office of Neighborhood Safety, the Safe Return Project, the RYSE Center and the police department — to advise staff during the process. This task force will have access to legally allowable data and legal advice from the city attorney, and they’ll have standing meetings with the city manager and someone representing the police department. A report back to the council will be required by September, and then each month following.

Butt, as a part of his “no” vote, disbanded an ad-hoc policing committee consisting of himself, Johnson and Bates. The committee was formed last week and hadn’t yet met.

Myrick, who brought forward the item with Johnson, introduced it by stating “facts I think we all know and would agree with regardless of what you think about the defunding [the police] movement.” He said the issue of police overtime exists because Richmond has about 150 officers trying to do the work of nearly 200.

The department also represents about 40% of the city’s annual budget, and by transitioning to a model that works with smaller staffing, the city could save millions of dollars, according to the agenda documents.

Myrick said the council couldn’t continue ignoring the “elephant in the room” budget after budget, but they had to approach the issue carefully.