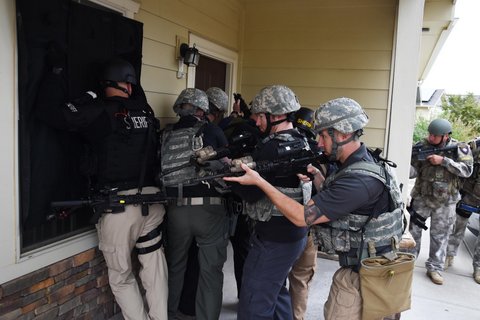 SWAT officers in training practice a scenario outside a vacant home on Schriever Air Force Base in Colorado in 2017. In Richmond, a SWAT team stormed the author’s home, pointing assault rifles at him. (Halle Thornton / U.S. Air Force)

I was abruptly woken by gunshots. Too young to understand what happened, I understood the pain and fear in my mom’s voice when she dragged me from my bed, yelling, “Get down!” Her pain and fear turned to anger when she realized the shots came from the gang presence surrounding our house. We were fine that night, but it replayed in my mind for years.

Gang members were all around, even in my family. If I hadn’t seen the pain the violence and my sibling’s choices caused my parents, I’m certain I would be in a gang. Instead, I chose a path that let me make my parents proud and helped me with personal problems, like depression.

After a week of playing at recess at a new elementary school, I was deemed the “good soccer player.” As I made the Bayview Elementary team, my brother chose the lifestyle I feared so much.

Arguments built at home over attitudes and consequences. The pain in my parents’ eyes weighed on me. My brother didn’t know any better, but his hanging with the wrong crowd affected us all.

Playing soccer, my coach cheering us on, made me feel free and warm. It gave me clarity from the growing darkness at home — until the day we found out our coach had been shot and killed. He was a young man helping us stay away from what would end his life. The school’s soccer program died with him, and the darkness in our house consumed me.

It got worse in middle school. I joined a club soccer team, but I was depressed and couldn’t see a future for myself. I still had to come home every day to anger and hopelessness at every turn.

My only other escape was school, so I decided to try harder. My good grades eased my and my parents’ pain, but this was only slapping a Band-Aid on an open wound. My brother had no concern for my parents’ feelings, coming home past 2 a.m., with drugs, weapons, people driving slowly by our house, those same people asking my parents for his whereabouts.

It almost became unbearable, until it hit me: I could still make my own path. I chose to let my grades define me and to play soccer with more passion. That gave me hope and helped keep me from bringing home the same pain as my brother.

School and soccer helped me at my most vulnerable. I was on my way home one day when two gang members approached and asked me, , “What you claim, little homie?” With school and soccer going well, I decided not to respond. They chased me for a few blocks, but I outran them. My grades motivated me to spend more time at school, and my friends on the team were dealing with similar problems. I found safe spaces I think every young person in a lower-class setting needs, especially kids prone to adopting a gang lifestyle.

Everything hit home the hardest in high school. My grades fell, and soccer seemed like a job not an escape. I know my grades are my responsibility, and I let others control how I felt about soccer. But my brother continued his gang lifestyle, and the darkness in the house hadn’t left at all. My parents were more stressed than ever, wondering why their son acted the way he did.

One school morning, we learned how serious it had gotten. Again, I’m woken abruptly —this time by banging on the front door. Then, “SWAT! OPEN UP!” I hear the door swing open, hitting the wall. Then, a loud bang and white flash fill the house.

I see four white men, all at least 6 foot 3, rushing towards me, assault rifles pointed at me. I knew not to make sudden movements — until I saw my mom. I thought, “I’m not going to let them touch my mom.” I stood firmly in front of the doorway that led to her, but next thing I know, I’m thrown face down by two men who put their weight on my neck and ribs. I was angry and hurt, but I didn’t want to die, not in front of my mom, so I stayed silent and tried to suppress the pain and hunger for air I was feeling.

I knew this was happening because of my brother, but I didn’t see him anywhere. My mom’s cries as I’m being dragged put the most dreadful feeling in my chest to this day. I stayed silent while they pulled me to the front yard and saw my brother in cuffs on the grass, surrounded by cops. He saw me and said, “Damn, they got you too? I’m sorry, little bro.” I’d never felt so empty in my life. My brother had good in his heart. He loved his family. He just chose a different path. You could say he’s a product of society, but it was his actions that made us all suffer.

My brother was taken away for a while, and as sad as it is to say, the darkness in the house began to fade. I needed a few months to get my grades back up and enjoy soccer again.

School and soccer gave me opportunities and showed me what I’m capable of. I was able to make a lot of great friends through soccer, friends who were struggling just like I was. They showed me I wasn’t alone. School and soccer helped me realize my worth and helped me navigate pressure and depression. I’m thankful for the experiences I’ve lived through because they’re the reason I am who I am. And my parents were my rock, my reason to stick to books and sports and stay off the streets.