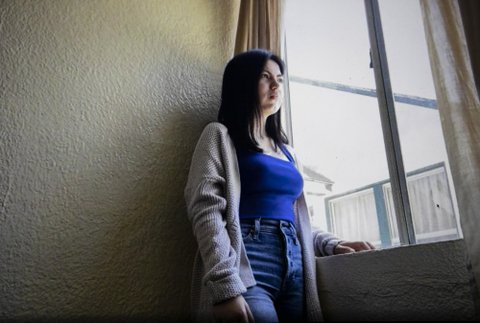 Many students such as Dulce Jimenez, in her boyfriend’s apartment where she often studies for the LSAT, have asked their schools to reconsider their financial aid because of the pandemic. (Anne Wernikoff / CalMatters via Google Hangouts)

UCLA student Dulce Jimenez didn’t file a federal student aid application for the 2020-21 school year; she was set to graduate in spring, and thought the days of worrying about paying for school would be behind her. But then the coronavirus pandemic hit. Jimenez found herself dropping a class, then needing to make it up during the summer — just when her parents’ work hours had been reduced.

Paying for a class out of pocket would add to her family’s financial stress, Jimenez said. “I am concerned about having to pay for my educational costs because things are really tight for my parents, so they would not be able to help me,” she said.

So Jimenez asked UCLA to revisit her financial aid, becoming one of a growing number of University of California and California State University students appealing their aid packages as their families face economic fallout from COVID-19. Officials at both universities say financial aid appeals are up systemwide, with especially dramatic increases on some campuses. By the end of spring quarter, UC Riverside students had filed twice as many financial aid appeals as they had the year before. At UCLA, financial aid director Ina Sotomayor said requests for additional funding for the fall are already up by 36%.

Many students filing appeals are coping with unemployment. About 71% of returning college students in California say they have lost some or all of their income due to the pandemic, according to a recent survey of 76,000 students by the California Student Aid Commission. Thirty-four percent say they’ll need to work more in the fall to afford educational and living expenses, while 21% think they should attend a college that is less expensive.

State, federal and institutional financial aid cover tuition for most of California’s low-income students. But that money doesn’t always cover living expenses, and federal aid isn’t available to undocumented and international students. Financial aid officers at UC and CSU say they are reviewing and adjusting awards sooner than usual and digging into emergency and donor funds to try to close the gaps.

“Since the start of spring quarter, we’ve been hearing more and more stories about students whose parents have lost their jobs, students who are going to have difficulty paying for fall quarter,” said Patrick Register, the director of the UC Santa Cruz Financial Aid and Scholarships Office.

California colleges and universities generally allow a student to file a financial aid appeal if their actual educational costs exceed those the school has budgeted, or if their family’s circumstances change. Appealing involves submitting evidence of the additional need, and can sometimes be confusing for students, said Abigail Seldin, CEO of the Seldin/Haring-Smith Foundation. The nonprofit foundation has created an online tool, SwiftStudent, that walks students through the process.

“There are a lot of people who are in tough situations, and there’s not a lot of guidance out there about what they should do,” Seldin said.

Launched in April, SwiftStudent offers appeal letter templates and advice for tricky situations, such as asking aid officers to ignore your parents’ income if they are not contributing to your education.

Not all students benefit from filing an appeal. Those with an expected family contribution that’s already set at zero — meaning the federal government has decided their family earns so little they can’t contribute to the student’s education — won’t be eligible for more aid unless the cost of their schooling goes up.

But those students are still often asked to pay a “self help” contribution towards their education, usually by working or taking out loans. At UC Berkeley, that amount has recently ranged from $7,000 to $10,000 per year and is based on students’ need and the financial aid budget that year, said financial aid director Cruz Grimaldo.

Filling that gap becomes more challenging for students during a pandemic, with fewer jobs available. “We fear that students earning less money will feel like they have no other option but to take out loans and/or drop out of college,” said Emelia Martinez, director of partnerships at Rise, a student advocacy group.

Some campuses where a large portion of the student body has an expected family contribution of zero have not seen a jump in financial aid appeals.

“For a great number of students, an appeal doesn’t help them any,” said Kelly Russell, director of financial aid at California State University Fresno, where 80% of students receive some form of aid.

Colleges are also adjusting to students with different types of financial needs than before the pandemic.  The University of Southern California at first said it would not include housing costs in fall financial aid packages amid uncertainty about whether students would return to campus, the Daily Trojan reported. But after student outcry, the university created a $4,000-per-semester “Living-at-Home Scholarship” for students who choose to live off-campus with their families.

Some students who receive financial aid feel they have to redirect money intended for educational expenses toward helping their family’s finances, Grimaldo said.

“So much has changed just in the last 60 days,” she said. “Our students are wanting to support siblings or their parents or their grandparents or their children. We’re challenged with some of the federal and state regulations that allow us to support students, but not necessarily the other members of their family.”

Lillian Romero, a psychology and education major at UC Riverside, said it’s been hard balancing her educational costs with the needs of her family. Her mom has been struggling to find a stable job since 2017, she said, and the pandemic made that search more difficult. To save money on rent, she, her mother and sister all moved into a single bedroom in a family member’s home.

Though Romero’s expected family contribution is officially zero, she has had to take out loans to fully cover her expenses. An on-campus work-study job fell through when the coronavirus struck. Her family has agreed to save her financial aid money to cover her housing when she returns to campus. But Romero said taking on debt during an economic crisis has been stressful.

“I am worried about how paying for the loans with my family’s assistance will hurt my family’s chances of moving and paying for medical bills,” she said.

The federal CARES Act has bolstered campuses’ financial aid budgets; California’s public colleges and universities received more than $680 million to distribute in grants to students, doling it out in chunks of $150 to about $2,000. Colleges have also sought aid from private donors — UC Berkeley raised $1 million in donations for emergency grants to undocumented and international students. But some financial aid officers said they worried about keeping up with the need if colleges don’t get another round of federal stimulus money.

UC Davis financial aid director Deborah Agee said that she encourages students with unmet need to take loans, noting that the default rate for students at the campus is under 2%. “I like to remind students that you need that money to complete your education. You should take it,” she said.

Student loan debt in the United States currently clocks in at over $1.6 trillion, more than auto loan debt and credit card debt. The average student loan debt for a borrower in California was $22,585 in 2018, according to The Institute for College Access and Success, a nonprofit based in Oakland. The federal government estimates that debt of that size will take an average of 20 years to pay off — though some researchers have found that when students borrow less than they are eligible for, their grades suffer.

Uncertainty surrounds another key piece of financial aid: the federal work-study program, which provides subsidized jobs to students. Some students lost their only source of income in the spring when off-campus jobs at nonprofits and public agencies that were funded with work-study dollars shut down. University of California campuses issued students grants to make up for some of the lost earnings, and many on-campus jobs shifted to remote work.

Like classes, work-study at the University of California is going hybrid for the fall, with campuses offering a combination of in-person and remote jobs. At UC Davis, a small number of students have already returned to work in the research labs.

“We keep them socially distanced, and we clean all the surfaces, anything that might be shared,” Agee said. “We’re not going to bring everyone back in at the same time.”

Still, some financial aid officers said they may not have enough grant funds to make up for all of students’ lost earnings as traditional work-study jobs in libraries and dining halls become scarce.

Grimaldo said she was “very concerned” about the future of work study for the coming academic year.

There’s one place, however, where financial aid officers said work-study jobs were more plentiful than ever — in their own offices, where the requests for help continue to pour in.

Arredondo is an intern with the CalMatters College Journalism Network, a collaboration between CalMatters and student journalists around the state. Omar Rashad and Stephanie Zappelli contributed reporting.