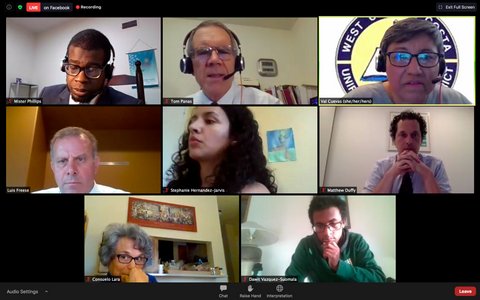 Posted at 15:22h in Education by Danielle Parenteau-Decker 0 Comments

On Wednesday, the West Contra Costa Board of Education voted down a parcel tax for the November ballot.

Additionally, the board voted down a proposal to create a satellite campus for the West County Mandarin School in East Richmond, at the former Adams Middle School site. According to agenda documents, both Superintendent Matthew Duffy and the school community chose the site as the long-term home for the school, as the Mandarin program has outgrown its current site.

The board rejected the proposed parcel tax 4-1, with board member Conseulo Lara voting in its favor. A parcel tax, once it’s placed before voters, requires a two-thirds majority vote to pass. Parcel taxes collect equal amounts of funding from each home, on a per-parcel basis, and they can only be used to support school programming. The tax, if passed, would have raised $9.2 million for the district each year, according to agenda documents.

Tony Wold, associate superintendent of business services, said asking the community to take on another tax during a pandemic was highly problematic, but state and federal governments haven’t stepped up to save public education. He asked the board to not think of adding a parcel tax to the ballot as an emotional decision, and that the community should decide whether they support paying more for education.

“We will have to reduce things that none of us want to reduce if we don’t get additional revenue,” Wold said.

Most board members said they wouldn’t support the addition of a parcel tax because of the additional pressures on the community caused by the COVID-19 pandemic. Some board members also said they weren’t inclined to support the tax because voters passed Measure R, a $575 million school bond measure, in March with roughly 59% of the vote. Bond measures incur a debt which must be paid by taxpayers, and bond funds can only be used for brick and mortar construction projects.

Board member Valerie Cuevas said even if the community voted to pass the parcel tax, it would only fill in a blip of the district’s fiscal needs. She said she voted against the parcel tax because everyone in the community is hurting from the pandemic and that people have already done their part in supporting schools. She said it would be unhealthy for the community to take on an undue burden.

“The inadequacy comes from the federal government and the state government,” Cuevas said. “This community has done its part. It’s taxed itself over and over again.”

Lara, the sole board member who supported the tax, said it would help the community by allowing the district to better maintain staffing levels of teachers and nurses. She said she saw the tax as part of a COVID-19 response.

Board President Stephanie Hernández-Jarvis said the parcel tax, if passed, was a “Band-Aid” that wouldn’t solve larger problems the district is facing. Because of that, she said, she was too concerned with job losses and income loss in the community to leverage a tax.

In other news, the board voted 4-1 to not move forward with the plan to establish a satellite campus for the West County Mandarin School at the Adams Middle School site, with Lara opposing.

The plan was recommended by staff, but most board members said they disagreed with it because of a $350,000 cost.

Board member Mister Phillips said two months ago he suggested the district add portables to the Juan Crespi Middle School to help house the increasing number of students at Invictus Academy, a co-located charter school that operates within Crespi. Phillips said he was told the portables weren’t feasible because the district didn’t have enough money. Now, he said, staff was asking the board to build a “whole portable city” for the Mandarin school.

One appeal of the Adams site is its close proximity to the current location of the Mandarin school. Cuevas said she didn’t buy the argument that people wouldn’t go to the school if they put it somewhere else. She suggested the Portola site in El Cerrito, which wouldn’t cost the district any money.

“For everybody to get what they want, we need more resources,” Cuevas said.