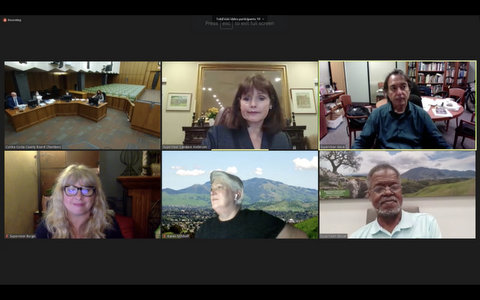 The Contra Costa County District Attorney’s plan to close the county’s juvenile hall by 2021 received both praise and criticism from county supervisors at a 12-hour long departmental budget hearing Tuesday.

Earlier in the day, District Attorney Diana Becton sent out a press release saying she was forming a Reimagine Youth Justice Task Force. The task force, according to the release, will consist of county departmental and community representatives and will give recommendations to the board on how to change the youth criminal justice system through “restorative, community-based solutions.”

The initial focus of the task force will be developing a process to shut down the juvenile hall in Martinez by 2021, according to the release.

“Youth crime has been on a steady decline over the last twenty years, reinforcing the conclusion that moving away from youth incarceration is in the best interest of rehabilitation, public safety, and fiscal responsibility,” Becton wrote in the press release.

Becton went on to write that the county shouldn’t close the Orin Allen Youth Rehabilitation Facility, also known as the Byron Boys Ranch, until the task force has made its recommendations to the board. The ranch is a rural 50-acre alternative rehabilitation facility for boys who have committed nonviolent crimes and have been assigned there by the Juvenile Court.

Supervisor Candace Anderson said there hadn’t been any input from the board about the task force, and called the press release a “slap in the face” to chief probation officer Esa Ehmen-Krause, who oversees both the ranch and juvenile hall.

Supervisor Karen Mitchoff said starting a budget presentation with a press release was not appropriate. She also said the county does a fabulous job of diverting youth and it’s unfair for the D.A. to say that the average annual cost per incarcerated child in the juvenile hall is $473,000, considering the population of the facility has dropped significantly over time.

Supervisor Diane Burgis said she’d asked the county administrator’s office about the costs at each facility. At the hall, she said, the cost per juvenile is about $456,876, while at the ranch, the cost is about $487,546. County administrator David Twa said those numbers come from dividing the total cost of operations at both facilities by the number of juveniles present.

Supervisors John Gioia and Federal Glover, who are both quoted in Becton’s press release, supported her proposal. Gioia said he and Glover went with the chief probation officer to visit both the juvenile hall and the ranch a few weeks ago.

Gioia said he’d been surprised to learn that there were plans in place to close the Ranch and prepare the juvenile hall for those additional youths. This had happened, Gioia said, because county officials had made a tentative decision without approval from the board. He asked what was the difference between that and the DA’s press release.

Ehmen-Krause said she’d been unable to review the DA’s press release until late on Monday night, and she shared her concerns with the D.A. on Tuesday morning. She said the announcement took her aback because there hadn’t been discussion about closing the juvenile hall.

Ehmen-Krause also said it was misleading to say or imply the ranch has a lower recidivism rate than the juvenile hall because the county doesn’t know the recidivism rate for any of its programs. This is because the county doesn’t have a case management system, she said, which she’s working on establishing. The ranch also has a history of escapes, including nine from August 2019 to the present, she said.

Most public commenters who spoke on the issue supported the DA’s plan to close the juvenile hall.

Elisa Kang, a Richmond resident and community organizer for the California Nurses Association, said the board should prioritize funding that would uplift youth, not incarcerate them.

Jonathan Laba, supervisor of juvenile units in the public defender’s office, said the board shouldn’t remove the Ranch before the reimagining conversation had even happened. He said it was troubling that some wanted to expand the juvenile hall, which he said is bad for youth physical and mental health, as well as mental development.

“Juvenile hall is a youth jail. It’s not some benevolent dormitory as I’ve heard some folks refer to it today,” Laba said. “It’s made of concrete and steel, fences and jail cells.”

Eddy Chacon, a youth justice coordinator for the RYSE Center in Richmond, said after having conversations with people who’d been locked up in both the juvenile hall and the ranch, he could see that the experiences at the hall were far more traumatic and dehumanizing in the long run. He called on the board, and other people in power, to use their privilege and power to create opportunities for Black, Latinx and LGBTQI youth.

“Don’t forget children and youth are humans who sometimes are misguided, but they need real healing that is driven by love and not punitive measures like incarceration,” Chacon said.

The board didn’t make any moves to direct staff on the issue. Gioia and Glover suggested that the D.A. and chief probation officer work together, while Anderson said she wanted the decisions regarding the juvenile hall to be primarily in the hands of Ehmen-Krause.

The closure of either facility isn’t reflected in the budget, so the board moved on from the issue. The budget will again come before the board next Tuesday, and final approval is scheduled for Sept. 15.