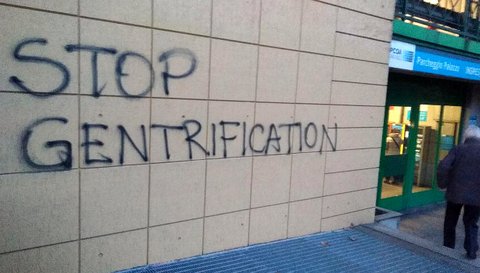 28 Aug I Lost One Home to Eviction. Gentrification Is Taking My City.

Posted at 08:00h in Commentary, Youth by Danielle Parenteau-Decker 1 Comment

When I was 7 years old, my family lost our home in Richmond. I was too young to understand why, but I felt the pain we experienced. The look on my parents’ faces as we packed up the last of our things from the house I had been growing up in said it all. I was sad, confused and lost as we said goodbye to our home and the neighbors we had come to know well.

Looking back, I realize that my parents simply couldn’t afford to keep us in that house. Over the years, I’ve grown to feel a sort of neglect from the city I was raised in.

Now, especially, I feel hopeless that I won’t be able to afford a home in Richmond either. I’m scared. I used to worry about tests or getting home on time, but reality has struck a chord. I’m constantly worried about gentrification and what’s been happening to the community I love.

With so much change going on in the world, it might be easy for the more fortunate to overlook the detrimental effects that gentrification has on longtime Richmond residents. When you benefit from something, it’s easy to turn a blind eye to those being wrongly distressed. When I think of gentrification, I see families struggling to pay rent because the cost of living is rising so much that it almost feels suffocating. I see a cycle of people living paycheck to paycheck and communities worsening due to neglect. I see people losing their homes and ways of life being flipped upside down.

It hurts to leave a place you love simply because the bills became overwhelming waves of stress. It’s a goodbye that leaves a stinging feeling in your chest. So does seeing all this change from corporations planting their buildings where parks or homes used to be. Is it OK to strip people of their lives as long as they make a buck?

>>>Read: What an Eviction Does to a Family

Gentrification, to me, means alienating the people who shaped this place, culturally and spiritually. When newcomers see a house they can afford, they turn a blind eye to the family who lived there before, the same ones who shed tears when they saw their bills.

After thinking out about what gentrification means to me, I decided to talk to a couple people I know to hear their perspectives.

“I feel like it’s a privilege to live here now. With everything changing, it’s like you’re lucky to live here at this point,” said my good friend Hugo Nevarez.

But he’s worried that privilege will soon run out. “I love living here, but I see how expensive things are,” he continued. “As much as I hate to say it, I might just move out of here to live comfortably.”

Nevarez sees his parents stressing over bills, especially with his mom out of work due to COVID-19. The worry weighs on his mind and his chest.

Beyond his own family’s experience, I asked him how he thinks gentrification is changing our environment.

“It makes me think of the good times and how things used to be,” he said. “I can see all the places I used to love in my head, but I can’t go visit them.”

Next, I turned to my mentor and role model Antonio Martinez, who told me what gentrification means to him.

“I think about displacement; I think about communities that historically [have] been under-resourced, marginalized, oppressed and disenfranchised,” he said.

Martinez, who grew up in Richmond, said he thinks about the resources that now pour into communities that were never available to those who had “been living there for generations and generations.”

He recognizes what each new business means for some poor families.

“I think about property value and how, often times, whenever a new Target or Walmart or Jamba Juice is opened, a family of color just had the rent increased,” putting them at risk of being evicted.

Martinez said even the positive changes aren’t worth it.

“As much as I would like to say that is nice to see the community of Richmond invested in, I would rather it look like it always has and continue to have the beautiful Black and Brown community members that really give the city its soul and spirit.”

He went on to describe some of the consequences of gentrification that he has seen through his work as an educator in various Bay Area cities.

“I have known many students who have had to leave school in the middle of the school year because their families were no longer able to afford to live in the city where they attended school,” Martinez said.

With that in mind, I asked him if gentrification made him nervous for the future of our communities.

“I am definitely nervous for just how much more of an impact gentrification will have on our communities that historically have been filled with people of color,” he said, “I look at San Francisco, for example, and see a city that used to be so vibrant, that used to be so full of culture and is instead now full of individuals who work in the tech industry who have contributed to the displacement of many Black and Brown families.”

He said he is afraid that “restaurants ran by families of color will no longer be around because they will not be able to afford the rent for the building that they use” and “that educators of color will no longer be able to afford to live in the areas that they teach. That, in turn, “will discourage them or make it more difficult for them to teach in those areas,” he continued.

“Gentrification has impacted the Bay Area greatly,” Martinez said, but he hopes “we can continue to advocate for communities of color, for families of color, for people of color who deserve stable and secure housing.”