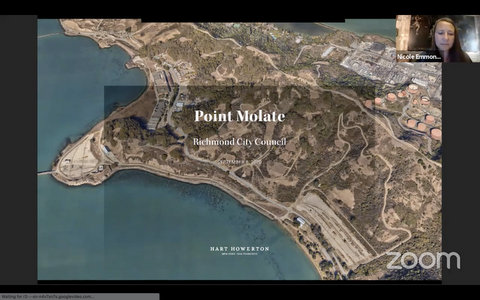 The debate over developing Point Molate has been going on for more than 20 years. (Edward Booth / Richmond Pulse)

A contentious plan to build residential and commercial properties at Point Molate will move forward after the Richmond City Council approved a deal with the project’s developer Tuesday.

The council voted 4-2 with one member absent to certify several final areas of the plan and approve a deal for a mixed use community with Winehaven Legacy LLC — a subsidiary of Irvine-based developer SunCal — that includes 1,452 residential units, about 420,000 square feet for commercial use and a joint fire and police station, according to agenda documents. Additionally, about 70% of the project site will remain open space, made up of recreational areas and parks open to the public.

The development agreement gives SunCal a 15-year term to develop the area, with an automatic five-year extension if phase one of the construction — which includes infrastructure, the police and fire station and 67 required onsite affordable units — is completed within 10 years.

Council members Eduardo Martinez and Melvin Willis opposed the passing motion and council member Jael Myrick was absent. The vote came after hours of public comment urging the council to halt or delay the deal, as well as a motion from Martinez to postpone the item which fell 2-4 with Wills and Martinez voting to approve.

A fiscal and economic impact analysis prepared by the developer — and peer reviewed by consultant BAE Urban Economics — estimates an annual net fiscal benefit to the city of about $1.4 million after initial development is completed, and about $6.7 million once the development is fully built. One-time revenues from land sale proceeds and transfer taxes will also be a significant financial benefit to the city, said David Shiver, principal of BAE.

However, many commenters cited a separate economic analysis released on the day of the meeting by Strategic Economics that indicates the city would lose money through the development.

Martinez said he hadn’t had a chance to read the study or the “thousand plus pages” related to the project. He said the council should delay the decision so it could make an educated, informed decision.

“I really think we need more time to go over the information and to have the public become acquainted with the information so that their public opinion isn’t based on opinion but based on facts,” Martinez said.

Willis said he was concerned about unintentionally creating a gated community if the affordability levels aren’t low enough. So far, he said, the project hasn’t shown that housing in the area will be affordable enough.

Council member Ben Choi said none of the commenters had talked about the terms of a settlement agreement made between city officials, the Guidiville Rancheria of California Indian Tribe and developer Upstream Point Molate in April 2018. The agreement requires the city to build at least 670 units of housing on the property or sell it back to the developer for $100 for each development area — comparable to the price of “a cheap pair of Italian shoes,” said Choi.

Upstream and Guidiville were hoping to build a casino on Point Molate, but their proposal was rejected in 2010 by Richmond voters, through an advisory referendum vote. They sued the city shortly after, arguing they’d spent millions of dollars to obtain agreements to build the casino.

Because of the settlement, net revenue the city gains from selling the land to SunCal — at a minimum of $45 million, according to the staff report — will be split 50-50 with Upstream and Guidiville.

Council member Demnlus Johnson said, because of the settlement, trying to postpone approval wasn’t realistic. He said he didn’t want the city to end up back in litigation or lose the property to Upstream, and as a result losing the benefit of community input on how Point Molate is developed.

“For me, it’s very simple: If we don’t move forward with tonight’s action, we lose the property; we lose community input,” Johnson said. “We’ve got to make the best of a bad situation.”

Martinez said the city could ask the judge for an extension because of the new economic study, which he said would be a wise thing to do. He said he thought the city could be financially overextending itself by building at Point Molate.

Mayor Tom Butt said many aspects of the debate about building at Point Molate have been the same since 1995, when he was first elected to the council. He said the current waterfront park at Point Molate is nice, but the rest of the area is fenced off and inaccessible to the public.

“Without a project that will create the infrastructure for these public spaces, it’s never going to happen,” Butt said. “I do not want to see Point Molate fenced off for another ten years.”