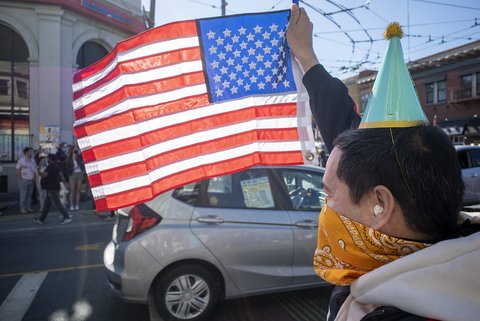 Posted at 12:52h in Youth by Pulse Editor 0 Comments

Editor’s Note: Three local young adults tell Richmond Pulse how they feel about Joe Biden’s presidential election win. One reflects on growing up under President Obama and beginning adulthood under President Trump. One says a weight has been lifted, but acknowledges real change is up to the people. One recognizes what Biden and Kamala Harris’ election means to some but says things won’t automatically get better. Their responses have been lightly edited.

As soon as I heard Joe Biden was projected to be the president-elect, a bout of disbelief washed over me, and I wondered if this reality was merely a dream. I ran to my aunt and gave her a huge hug while we combed through Twitter notifications and live news updates on that historic day. With hundreds of news sources affirming the election was called, I began to feel a wave of calmness. ‘So this is actually happening,’ I thought to myself.

Four years ago, I was a freshman at San Francisco State University, starting my college career under the unimaginable Trump administration. As an 18-year-old, I had lived almost half my life under the hopeful precedent set by the Obama White House, believing whole-heartedly in the progressive change that American democracy could bring. That hopefulness was soon unraveled by the hateful rhetoric embodied by our 45th president. I questioned the integrity of the ‘American Dream’ and the legacy that my immigrant family had built. Would it all just come crashing down? Would America lead through xenophobia, racism and homophobia? The United States is far from a post-racial society; however, was I naive to think that America had a chance to change? If there is anything that the Trump presidency has taught me, it’s that words and impressions matter — especially in places of leadership. Having emotional intelligence, or the ability to empathize, is a soft-skill that cannot be taught. It is what distinguishes the Obama presidency from the Trump presidency: one tries to console and fight for unity, while the other sows chaos and division.

These four years have felt like a lifetime, but in a way, they’re mostly reflective of my growth into adulthood in the strangest coming-of-age tale in modern history. Like the current political climate, my college experience had been rife with anxiety, disappointment and fear. All of these challenging moments have shaped me into who I am currently. It is only fitting that this chapter of my college story ends on a high-note and a newfound hope for a better future. We have a long fight ahead, but this election has offered a fresh start, and I’m optimistic.

This year’s presidential election lifted the weight of tyranny off of my shoulders. From the first day they started counting the votes, I felt my anxieties double. I felt the weight of oppression and xenophobia crashing down from an ignorant man’s mouth. I watched as half of the nation followed a dictator as he did so poorly during his presidency. I voted for the candidate who opposed him. I voted for the candidate who had the people on his side to get that tyrant out of office. Although we were successful in our efforts to shut him out, I believe our job is far from over.

This year’s presidential election showed just how divided this country really is. But it also shows how the people have more power than we thought. We must hold the new leaders in office accountable and make sure they hear our voices. This election made change seem possible. I feel as if the skies will be clear of hate in the coming months, the streets where kids used to play will be full again. I feel as if the air we breathe will fill us with hope for a brighter future. But, then again, it’s up to the people to make change happen. The power is within the people.

Sometimes, I feel like people forget the United States government is supposed to take care of and provide for its people. That there are groups fighting for human rights is a violation of the government’s purpose. However, that’s where we’ve always been — fighting. So I don’t care about the election.

We all know Donald Trump was terrible, but his presidency wasn’t shocking. It just revealed to the general public how the government truly works: a lack of regard for lives and ran like a business. His moves were reckless and chaotic and showed that checks and balances could be broken whenever they wanted. People did not hold him accountable for his action or statements. He was almost removed as president but continued on as if nothing happened. If President Obama had acted the way Trump did, he would have been removed swiftly, pinpointing the racism. Obama, however, isn’t free from judgment. There were still people put in cages and war crimes committed during his command.

Regardless of who’s president, there’s still imperialism, war crimes and ignorance over people’s lives. Trump’s presidency revealed how much hate is soaked in this country, from the obvious racist whites to the children of immigrants, who disrespect their parents’ and grandparents’ struggles, to the capitalist who exploit others labor. I spent my four years in high school arguing with ignorance, hate and anti-Blackness due to people feeling too comfortable because of who was in power. Joe Biden’s and Kamala Harris’s victory is a relief for some people, and I’m happy for those people. However, Biden wrote the 1994 crime law and Harris is a prosecutor who imprisoned parents for truancy and placed transgender women in men’s prisons. Guess what? I’m still Black and queer. My life will continue to be a battle against the general government. Besides inner turmoil, there’s still countries the United States will invade and pillage. But people are talking about holding them accountable and to a standard, so let’s see how these four years go.