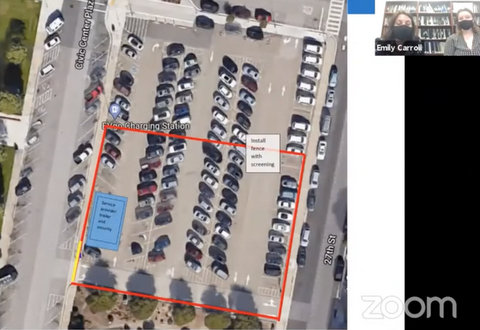 This area of a Civic Center parking lot could be converted into an area for people living in their cars. (Screenshot captured by Edward Booth / Richmond Pulse)

The Richmond City Council voted Tuesday to explore using the Hilltop Mall parking lot to carry out a one-year safe parking pilot program that would provide services for homeless people with operable vehicles. If Hilltop doesn’t work out, the city would instead establish the program at the Richmond Civic Center, in the parking lot in front of the Richmond Public Library.

The safe parking program will create a safe place for people living in their cars to park and sleep, according to the staff report. The pilot program will provide resources for homeless people, including transitional support to help them secure permanent housing and economic stability. The program is also expected to reduce traffic and the number of people living illegally in their vehicles on city streets, effectively decreasing enforcement actions from police and reducing legal costs to homeless individuals.

Michelle Milam, the Richmond Police Department crime prevention manager, said there’d been an exponential growth in the number of people living in their cars in the city since the COVID-19 pandemic began. She also stressed that the program was much different from a homeless encampment, in that it would provide resources to the homeless individuals and subsequently reduce crime.

>>>Read: Homeless During a Coronavirus Christmas

“It actually does provide resources. It has a case management process, an intake process,” Milam said. “It is not the same thing as a homeless encampment that is under-resourced or has very little resources and that is a fodder for crime and other activities.”

The temporary residents at the program site would also be required to adhere to a code of conduct and a safety plan to create a safe, respectful environment for all participants, Milam said. And participants would be evaluated through an intake process, with participation restricted to those with operable vehicles, with a maximum of two people per vehicle — a focus on single people or couples.

The program is especially important right now, Milam said, because many homeless shelters have temporarily closed as a result of the COVID-19 pandemic.

Three sites were brought to the council out of 35 identified by council members, Homeless Task Force members, city staff and members of the public. The three sites scored the highest on a scoring matrix that included considerations including site ownership, paving condition, access to transit, access to services and existing infrastructure.

The three selected sites were the Lighthouse Building at 1800 Barrett Ave., the fire training center on Cutting Boulevard and Stege Avenue and Civic Center parking lot 1 on 26th Street in front of the library.

The Lighthouse Building area was rated the highest by staff because it’s paved and mostly fenced and an existing building could be used by service providers. However, the site is small and would only hold 10-15 vehicles, and the site is adjacent to residential properties, according to the staff report.

The fire training center would hold the most vehicles, an amount estimated by staff to be at 20 to 30, but the presence of the pilot program would impact fire department training capabilities and could require off-site training at a cost.

The Civic Center parking lot, chosen by the council as the site where the pilot program will land if the Hilltop lot doesn’t work out, has the capacity for 15 to 20 vehicles and allows for easy oversight, but the area requires fencing and will impact staff and visitor parking to the Civic Center and library, including those visiting COVID-19 testing and vaccination sites.

The one-year pilot is anticipated to cost the city roughly $560,000, Milam said. The council was pressed to pass a site recommendation because $260,000 in grant funding for the program, from the California Homeless Emergency Aid Program through Contra Costa County, is contingent upon site selection. The site for the pilot program must be in place by March 1, per a request from the county. Milam said if the council didn’t make a decision Tuesday, staff thought the city could be in danger of losing the grant funds.

The other $300,000 needed to fund the program comes from in-lieu affordable housing fund fees designated by a previous city council specifically for the purpose of establishing a safe parking program for homeless people, Milam said.

Council member Melvin Willis said he preferred the Civic Center parking lot because it would act as a noticeable reminder of the homelessness situation. The fire training center was his last choice, he said, because he didn’t want to perpetuate putting services like this in the most underserved areas of the community.

Council member Gayle McLaughlin said many residents had become aware of a huge number of vehicles parked along Rydin Road, which had expanded because of the pandemic. Businesses in the area, she said, are waiting for the council to take action. And because of the huge need, the fire training site represented the best scenario because it had the most capacity.

“We’re not talking about a small number of vehicles. We want to help as many people as possible,” McLaughlin said. “Homeless people, as I think we should all recognize, are human beings like you and me.”

Richmond Fire Department Battalion Chief Aaron Osorio said using the training center could potentially prevent the use of a helicopter landing zone at the site. He said one landing zone, at the Kaiser Richmond Medical Center parking lot, has already been lost because it’s serving as a COVID-19 testing site.

The lack of landing zones is worrying, he said, because Richmond is a hospital desert. Sometimes, trauma patients are taken by ambulance to Highland Hospital in Oakland, but often during commute hours or if there’s high traffic, the department will typically use a helicopter. And without a secure landing zone, helicopter landings would have to happen in unsecure spaces such as a street or freeway.

“We do have a high number of traumatic responses, whether it’s accidents, shootings or assaults, that require the patient to be taken to a trauma center,” Osorio said.

Mayor Tom Butt suggested the Hilltop Mall as a possible site. He added that he didn’t agree that the suggested sites were the three best, and said helicopters land all over the place all the time. Butt said that of the selected sites, he prefered the fire training area because it has the most capacity.

“If we’re going to serve people, we need to serve as many as we can with the lowest cost per unit,” Butt said.

McLaughlin made a motion for staff to check out Hilltop as an option, and if it’s not available, to set up the pilot program at the fire training center. Council members Melvin Willis and Demnlus Johnson said they’d have to abstain from the motion because they said they didn’t want to perpetuate the cycle of dumping problems in poor communities.

“If this was strictly about the size of the site, the fire station would be no problem for me,” Willis said. “There is a feeling, and there is a hurt and pain that every time the city or government has a problem, they always want to dump it in poorer communities.”

Willis then motioned for the second option, after the Hilltop possibility, to be the Civic Center parking lot. McLaughlin added a friendly amendment for the staff to humanely address the homeless individuals who currently live around the library and the concerns from library workers, expressed during public comment, about safety and the ability for the library to run.

The motion passed 5-1-0, with Butt dissenting.