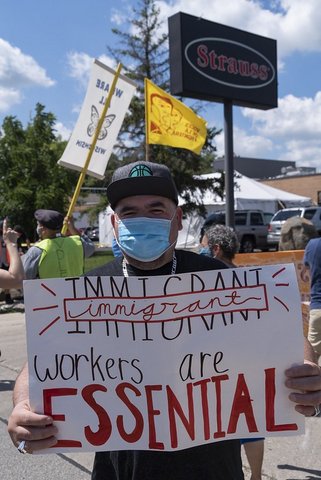 16 Mar The American Rescue Plan: Who Wins? Most Americans. Who Loses? Undocumented Immigrants

The $1.9 trillion COVID relief package signed into law March 11 by President Joe Biden, offers benefits for almost every American, but — once again — leaves out undocumented immigrants, millions of whom have been essential workers during the national crisis.

The measure, known as the American Rescue Plan, offers a new round of $1,400 stimulus checks to individuals earning less than $80,000. It also extends unemployment relief — which was set to expire March 14 — to Sept. 6, allowing millions of jobless people to get an additional $300 per week in federal benefits in addition to state unemployment compensation. People who received unemployment last year do not have to pay federal taxes on the first $10,000 they received in unemployment relief.

The measure also provides $135 billion to help schools safely reopen, $350 billion to support vaccination efforts, and another $350 billion to help state and local governments recover from a ruinous year. An expanded child tax credit of $300 a month per child — which will be available as a direct monetary payment each month — will lift half of the nation’s 11 million low-income children out of poverty.

“We have to spend this money to make sure we have economic growth,” said Biden on March 11 after signing the bill into law. He added that the relief measure will create 7 million new jobs.

“It changes the paradigm. For the first time in a long time, this bill puts working people in this nation first,” said the president.

The measure passed both the House and Senate with almost no Republican support. Senate Minority Leader Mitch McConnell, R-Kentucky, criticized the measure as “bloated,” and stuffed with sops that had no relationship to COVID relief. He noted that the bill was passed even as money from the last round of $900 billion stimulus funding had not been spent.

But Democrats disagreed. Speaking at a March 12 Ethnic Media Services briefing, Rep. Raja Krishnamoorthi, D-Illinois, said: “This is a game changer. This package of measures will help our economy heal. It is a big win for the American people.”

One of the biggest components of the relief bill, the fight which Krishnamoorthi spearheaded, was aid to state and local governments. “Unfortunately my pleas with regard to this type of aid fell on deaf ears in the Trump Administration. Thankfully Joe Biden has thought better of this issue.”

Krishnamoorthi said local aid was necessary because sales tax revenues and other sources of tax revenue have declined dramatically for many states, cities, and towns, forcing them to reduce services and staff.

“I have Republican mayors who are contacting me, saying: Look, we need the revenue. We need a way to avoid laying off further police and firefighters and what you did in Washington was terrific, but can you do more?” So this is not a blue issue versus a red issue. This is an American issue,” said the congressman.

Addressing the bipartisan divide on the relief bill, Krishamoorthi said: “I’m reminded of the that old saying – ‘Republicans just say no but take the dough.’ It’s interesting how many of my colleagues voted no, but they’re going to be gladly accepting the aid on behalf of their jurisdictions and those jurisdictions are going to benefit immensely from this help.”

Maag said one of the groups that would most benefit from the new law are low-income children. Fourteen percent of American children live in poverty; the relief bill would cut that to 7%. The rates of poverty are higher for Black children at 18%; and Hispanic children, at 22%.

Maag added that the two-year measure is unlikely to end cyclical, generational poverty, but is a start.

Stone challenged the Labor Department’s tabulation of the unemployment rate, currently 6.2% — about 10 million people — and said a more accurate number would be about 9%. Incoming Treasury Secretary Janet Yellen said last month that unemployment rates could be as high as 10%, as millions of people dropped out of the workforce during the pandemic.

Pre-pandemic, unemployment rates were 3.5%. Last July, however, as businesses shot down, unemployment skyrocketed to 16%, with 32 million people out of work.

The new unemployment relief measures are set to expire Sept. 6. Stone said he would like to see members of Congress return to the bargaining table before they go on their summer break in August. “They should be looking at economic conditions and deciding whether it’s reasonable to allow these benefits to expire on Sept. 6, or whether they should do something to further extend them,” he said.

Job losses have been most dramatic among low-wage earners. Thirty-one percent of all industries with the lowest average wages at the start of the recession have accounted for 55% of the 8.1 million private-sector job losses over the past year, said Stone.

Siby of ROC United advocated for a rise in the minimum wage; a hotly contested debate in Congress to raise the minimum wage to $15 per hour was left out of the final version of the bill. Seventy-eight percent of the nation’s 27.1 million service workers are women, people of color, and immigrants. Over one-third of the nation’s service workers do not earn enough to consistently make ends meet, he said.

The current federal minimum wage is $7.25 per hour. Restaurant workers, who earn a portion of their wage in tips, are paid about $2.31 per hour.

Siby compared the cost of living to income: A single mother of one child in Mississippi would need $26 per hour to live, but earns only $7.25. In California, using the same scenario, a single mother would need $40 per hour to make ends meet, yet earns just $12. “We have a huge gap between what people need to live on and what they are actually receiving and this is why the dependency on government subsidy is so high now,” he said.

Minimum wage raises would not adversely impact small business owners, who are accustomed to working in low profit margins, said Siby. He also said it was possible to raise minimum wages even amid the pandemic, as the proposed plan which failed would have annually raised wages incrementally.