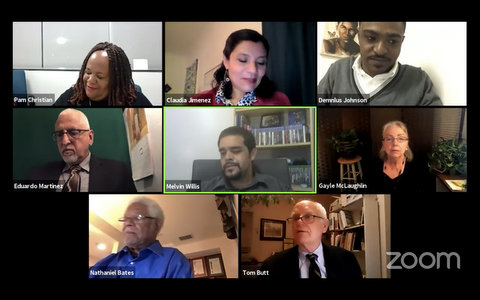 Posted at 08:00h in City Government by Danielle Parenteau-Decker 0 Comments

In a move that will likely lessen public backlash, the City Council reversed its approval for a one-year safe parking pilot program at the Civic Center on Tuesday. Instead, the city voted 6-1 to provide funding for homeless people with vehicles at two existing unsanctioned locations.

The city will also explore forming an ad hoc committee to develop a long-term plan for assisting unhoused residents at these locations, at Rydin Road and Castro Street. Mayor Tom Butt was the sole vote against.

The safe parking program, funded by a county grant and Richmond’s Affordable Housing Fee, intended to create a safe area for people living in their cars to park and sleep. But approval for the program at the Hilltop Mall parking lot and Civic Center parking lot 2, resulted in significant resistance from residential neighborhoods.

At Tuesday night’s meeting, Council members Claudia Jimenez and Eduardo Martinez introduced the motion that would reverse past approval and provide direct services at the existing sites. The services include addressing health, sanitation, safety, security issues to improve conditions at the sites and preparing residents to move to stable housing, according to the staff report.

The two council members invited Contra Costa County Supervisor John Gioia, who provided input on their motion, to speak at the meeting. Gioia said a parking program at the Civic Center site would only remove a portion of the vehicles at the two unsanctioned sites, leaving the city to deal with three encampments. He also argued that there would be “substantially more” housing opportunities in the coming months.

According to Gioia, the county will extend the Marriott Hotel lease through June 2022, reopen the Brookside Shelter and Richmond Rescue Mission during the summer and pursue the use of housing vouchers recently made available through a federal bill.

“This is not about turning Rydin Road into a permanent RV safe park,” Gioia said. “It’s about working with those residents with the funding we have to make their living situation healthier, safer, more secure and move them into housing directly.”

Most of the council was in favor of the motion but also cited the importance of long-term solutions. In particular, Council member Gayle McLaughlin called for the exploration of a future safe parking site in a non-residential area. McLaughlin said through conversations with some vehicle owners at Rydin Road, she believes many will not move to a shelter or hotel.

“If most people want to go to the motels, that’s great, but we need to have the safe park as an option,” McLaughlin said.

Butt said he continues to believe the city should prioritize funding for unhoused residents without vehicles. He added that the new motion leads to uncertainty about the timeline of moving people away from the unsanctioned sites and into stable housing.

“I’m thinking that in three months, I will go to Rydin Road, and it will look the same,” Butt said.

Council member Demnlus Johnson questioned how the proposed ad hoc committee, composed of three council members, would function with the Richmond Homeless Task Force. Gioia responded by saying the committee would not replace the task force but broaden its work.

In other news, the council spent more than two hours discussing an emergency agenda item after Council members Nat Bates and Eduardo Martinez cited a lack of due process for a proposed disc golf course at Hilltop Lake Park.

Multiple council members raised concerns given that the development of the course began despite no official approval from the city. All work for the course has since stopped.

“What kind of city do we run that people can arbitrarily do whatever they want without going through the due process,” Bates said. “This is the most embarrassing situation I’ve experienced since I’ve been on the council.”

The issue likely stems from an absence of city policy in these situations. According to City Manager Laura Snideman, city precedent suggests that general approval from the Recreation and Parks commission and the signing of an adopt-a-spot agreement, which allows the city to back out at any time, authorizes work to begin.

At its Dec. 2 meeting, the commission received a presentation from the East Bay Golf Club and seemed in favor of development but did not take action. On Feb. 5, the commission sent a letter of support to the club, citing its hope that the project would begin.

“The precedent is that the Recreation and Parks Commission can give a nod to a project like this,” Snideman said.

Snideman suggested the city look toward creating a policy that allows the council to review any decisions made by commissions or decisions.

Martinez, who was on the Recreation and Parks Commission, called any attempt to label this situation as precedent a mischaracterization. He added that all motions involving work on city property have always gone through the council.

“Just to put a bench on city property, we had to go through a process, and the process was extensive,” Martinez said.

The commission will consider whether to support the disc golf course at its April 9 meeting. The commission’s recommendation will then be brought to the City Council.