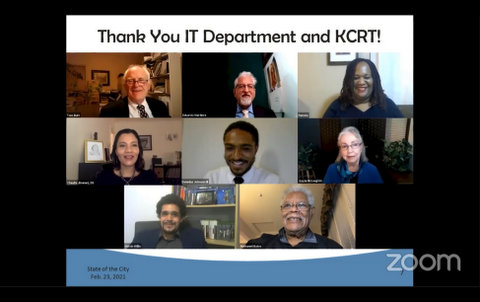 Following public backlash, the Richmond City Council voted 6-1 Tuesday to reverse its decision to use the Hilltop Mall parking lot for a one-year safe parking pilot program that would provide services for homeless people with vehicles.

Mayor Tom Butt was the sole vote against reversing the Hilltop Mall decision.

Before voting, Butt called the motion hypocritical given that the council members introduced the Civic Center site without input from the neighborhood, similar to the Hilltop decision.

City Manager Laura Snideman said only a portion of the council’s selection will be explored because the city already has a lease for COVID-19 testing nearby. The northern section of the new site’s parking lot is also used for the weekly Richmond Farmers Market, according to a staff report.

In his Wednesday e-Forum newsletter, Butt said the new site is “closer than Hilltop to everything, including a church and a temple, a 140-unit senior public housing complex, a COVID-19 testing site, the Richmond Farmers Market, the Richmond Memorial Auditorium and the Richmond Art Center.”

The council spent the majority of Tuesday night’s meeting discussing this highly contested issue after facing scrutiny for the last two weeks. Since the council’s Feb. 2 site decision, leaders of the Fairmede-Hilltop and Hilltop neighborhood councils organized an opposing online petition that has received more than 2,200 signatures as of Thursday.

Among the 27 public speakers on this issue were many residents who said the council failed to consult with the Hilltop community. Most speakers were in favor of other locations, such as the fire training center on Cutting Boulevard and Stege Avenue and the GRIP Project Hope site at the corner of 22nd Street and Bissell Avenue.

Jimenez said GRIP, a local nonprofit that provides meals and showers to the unhoused, would be the most ideal location because residents could be within walking distance of essential services. She added that the city would be able to use the GRIP site after the one-year program ends.

“To the best of my knowledge, all other sites would need to be closed down for good at the end of the pilot program even if the need for parking still exists,” Jimenez said. “That expiration date will make any investment in infrastructure and other sites a waste.”

GRIP Executive Director Kathleen Sullivan and board of directors member Cesar Zepeda gave the council a 20-minute presentation in support of the site.

Per a request from the county, grant funding for the program is contingent upon site selection by March 1.

“Not trying to jeopardize this funding,” Willis said.

The three councilors encouraged a safe parking program partnership with GRIP in the future.

Bates disagreed with any location that neighborhoods did not support. He recommended additional sites away from residents. “I will be voting no on everything,” he said.

Butt opposed the GRIP site, raising concerns outlined in a letter Contra Costa County sent to GRIP on Monday. The letter alleges multiple failures by GRIP to comply with contractual and operating standards for a homeless service.

“I think they do great work, but at this point, they’ve reached out further than they have the capacity to,” Butt said.

Sullivan responded to allegations cited in the letter while acknowledging the struggles brought upon by the pandemic.

“There are many things on there that have their inaccuracies that we’re in the midst of responding [to], and we’ll be making that information as public as the letter was made public,” Sullivan said.

State of the City

Butt also presented a summary of Richmond’s current condition with his annual State of the City address.

He began the address by highlighting the unprecedented year brought upon by the COVID-19 pandemic. According to Butt’s presentation, Richmond has had 9,421 positive cases and 74 deaths from the coronavirus.

The city’s number of vaccinations is currently 18,996, per Butt’s presentation.

“Most cities our size have one or two a year, if any at all,” Butt said. “While we remain in double digits, I continue to hope for a zero-homicide year, but it won’t be this year. Maybe next year.”

Richmond had its first homicide of 2021 earlier this month.

Butt ended the presentation with his hopes for the upcoming year, among them ending the pandemic, moving forward with the Point Molate and Campus Bay projects, driving down homicides and balancing the city budget.

The meeting finally came to an end when a motion to extend the meeting past 11:30 p.m. failed in a 3-3-1 vote with Butt, Jimenez and Martinez voting against. Willis abstained.