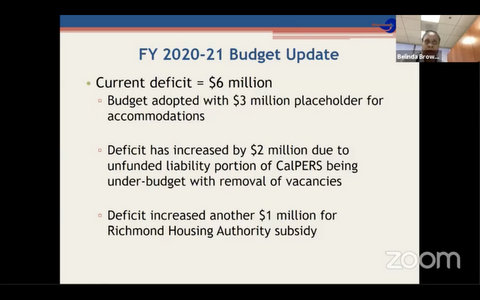 On Tuesday, the Richmond City Council received a report on the fiscal year 2020-21 budget and voted unanimously to move about $1.9 million from a roughly $3.1 million surplus in last year’s budget into cash imbalances, with the rest going to the city’s reserves.

The budget this year carries a roughly $6 million deficit, said finance director Belinda Brown. The budget was originally adopted in June with a $3 million deficit intended to be filled by accommodations from unions, which have yet to be made. The deficit increased by $2 million because a portion of unfunded pension liability spending was inadvertently removed from the budget alongside cuts to 58 vacant positions. And the deficit increased by another $1 million on Sept. 22 because the council voted to subsidize the Richmond Housing Authority’s budget deficit this year.

The council voted to use about $1.55 million of the roughly $1.9 million surplus from fiscal year 2019-20 to cure a negative cash balance in the R-transit fund, which is for transportation operation. The council also voted to allocate about $200,000 of the surplus for a classification and compensation study, and about $133,000 of it to balance the budget of another fund.

As a part of the budget presentation, city staff also gave the council information on deferred maintenance and capital improvements, and on the city’s cash reserves.

Finance director Belinda Brown said the city hasn’t budgeted for deferred maintenance for the past few years, which increases the structural budget deficit. Furthermore, she said, the longer maintenance is deferred, the more costly it becomes.

“The goal going forward, starting with next year’s budget, is we have to start budgeting, or funding and addressing some of the annual costs,” Brown said.

At the start of the meeting, the city had $19.5 million in cash reserves, representing 12% of total expenditures. With the $1.2 million adjustment, the cash reserves stand at $20.7 million, though $885,000 of that has been allocated to help balance the current year’s budget, Brown said.

The council will receive the first quarter budget report Oct. 27, and a report on overtime in September this year as well as information on updated financial policies, Brown said. Brown said during a staff presentation two weeks ago that 26% of the overtime budget had been expended by the end of August — to stay in line with the budget, only 17% of overtime should’ve been used by then.

Richmond resident Mike Parker said the city couldn’t continue to cut services to balance the budget, and recommended residents vote to pass Proposition 15 and Measure U to increase city revenues. Measure U, a gross receipts tax, will raise a projected $3.2 million for the city if passed; Prop. 15 would raise an estimated $6.5 billion to $11.5 billion each year for cities and a variety of other local government entities, according to the state Legislative Analyst’s Office.

In other news, the council voted unanimously to authorize staff to seek reinstatement of board membership on the Oakland Airport-Community Noise Management Forum, an advisory body that focuses on community noise concerns and is made up of representatives from several East Bay jurisdictions.

The move comes in response to a proposal from the Federal Aviation Administration to shift an existing flight path to Oakland Airport over central Richmond, which raised health, noise and environmental concerns among city leaders and community members.

Mayor Tom Butt said Richmond used to be a member of the advisory body, but at some point the city’s membership lapsed. The advisory body will consider the city’s application later this month. If it’s accepted, Butt said, the city will be able to appoint one city official and one resident to serve on the board.

“It won’t get us a lot of power,” Butt said. “But it will get us a voice in the regional issues involving airport noise.”