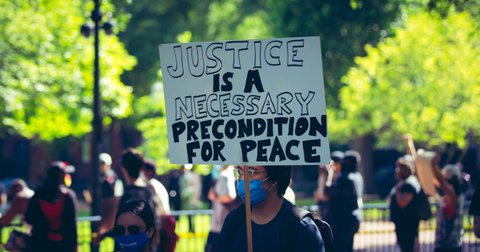 This Justice for George Floyd Protest was held in Washington, D.C., on May 31, 2020, six days after he was killed. (Johnny Silvercloud via Shutterstock)

A year ago this week, the world watched in disbelief the cellphone video that captured Minnesota police officer Derek Chauvin kneeling on the neck of George Floyd for more than 9 minutes, leading to the African American man’s horrific death — and triggering widespread protests and some incidents of rioting around the world.

In California, members of the California Legislative Black Caucus are reflecting on Floyd’s brutal murder, the progress the state and the country have made since it happened and taking stock of their own racial equity and police reform efforts in the Legislature, vowing to never give up their fight for fairness and justice.

“One year after the murder of George Floyd, we continue to be met with resistance at any attempt to answer the calls for meaningful police reform,” said Sen. Steve Bradford (D-Gardena), chair of the CLBC.

Bradford pointed out that California has always been on the leading edge of progressive change in America, but the state, he says, has been dragging its feet on rooting out some of the negative aspects of law enforcement.

“California remains one of four states without a decertification process to hold rogue cops accountable. As a state, we have to remain dedicated to setting the standard in this nation,” he said. “As legislators, we have a moral obligation to answer the calls for comprehensive police reform. We owe that much to George Floyd and all victims of police brutality here in California.”

The George Floyd protests were the largest unrest in the United States since the civil rights movement, the intensity of it heightened by the ongoing COVID-19 pandemic. The world was brought to a standstill as people sheltered in place at home, away of each other, in the greater interest of public safety.

In boardrooms and living rooms, it inspired a national reflection on race relations — and a collective confronting of historical racial injustices — and the mainstreaming of the slogan “Black Lives Matter,” once a progressive rallying cry embraced largely by the political Left; but met with strong resistance in many other corners of America, or varying degrees of skepticism or indifference.

Corporate America responded too, with programs and pitches, making decisions to promote racial equity. Black-focused organizations were flooded with donations. Most of America, both the public and private sectors, promised to review long-standing diversity issues with a fresh eye.

“To say that 2020 was a tumultuous year is a gross understatement. The COVID-19 pandemic changed every aspect of our lives — how we work, how we educate our students, go to the doctor, and communicate with one another, among other things,” said Bradford. “What did not change was the cycle of brutality and violence against Black and Brown communities by the hands of rogue cops in law enforcement.”

Since Floyd’s murder, members of the CLBC have introduced five different bills geared toward eliminating police use of excessive force and encouraging safer and more responsible law enforcement procedures. That’s in addition to six other pieces of legislation that members had already introduced the previous year.

“In the last year, we saw millions of people from all walks of life in the streets chanting ‘Black Lives Matter,’ but now, it is translating into policy reforms,” said Assemblymember Chris Holden (D-Pasadena). “Today, we remember the man who was George Floyd, and tomorrow we continue our work towards justice for him and the countless victims of deadly and excessive force by police officers.”

Assemblymember Akilah Weber (D-San Diego), the newest member of the CLBC — she won a special election in April — said, as the mother of two Black boys, Floyd’s death was “extremely painful and personal.”

“We all felt a riveting emotional reaction, and it was particularly devastating for the Black community who has repeatedly been subjected this this type of trauma for generations,” said Weber, who is also a medical doctor.

“This tragedy once again highlighted the urgent need to take action because much work still needs to be done to establish equity for all,” she added. “We must do better for our future generations.”