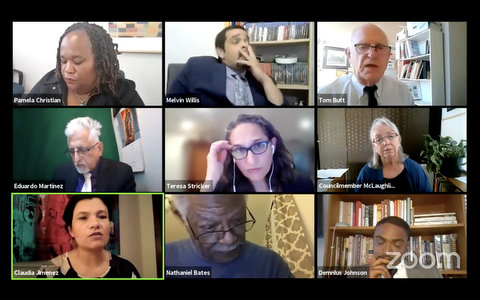 Richmond Mayor Tom Butt on Thursday temporarily derailed an attempt to remove his discretion to cancel meetings by not allowing the City Council to move forward with a vote and threatening to cancel the next scheduled meeting.

Despite objections from City Attorney Teresa Stricker, Butt cited Brown Act violations as his reasoning. Butt’s reluctance to hold a vote led to a nearly 40-minute standstill at the meeting with an extended period of arguments and shouting amongst the City Council. The council eventually voted to put on the agenda a motion to eliminate this portion of the mayor’s authority for next Tuesday’s meeting.

Thursday’s heated discussion follows Butt’s most recent use of the mayor’s discretion to cancel two July 20th council meetings. The first meeting included a public hearing to consider termination of the development agreement for Campus Bay if the developer failed to obtain the fee title to the property. After the developer met the deadline of July 19, Butt canceled the meeting to “avoid wasting time.”

In his July 21 email newsletter, Butt said the city attorney and city manager moved the public hearing to the second meeting and cited legal justifications, but he canceled it as well. He added that the public hearing was “plagued by poor staff work, a lack of authority to set the hearing and a questionable need for the hearing at all.”

Those decisions likely led council member Gayle McLaughlin to raise a two-part motion at Thursday’s meeting. The motions requested that the council put an item on the July 27 agenda to remove the mayor’s discretion and immediately suspend the discretion until the council makes a decision.

Stricker said the motion was proper because it related to scheduling and merely suspended the council rules, which regularly happens. She also said that the motion was not a Brown Act concern.

Butt did not agree with the assessment.

“City attorney, you’re full of it,” Butt said. “This has nothing to do with scheduling. It has to do with changing the City Council rules and to change the rules, it needs to be agendized. … You’re just flat wrong. You might be an attorney, but I just don’t think you’re very smart.”

In response to Stricker, Butt said he would utilize the mayor’s discretion to cancel the July 27 meeting.

“That meeting is hereby canceled, and you can do whatever you want to do now,” Butt said.

McLaughlin said the cancellation was not valid and asked for a vote to overturn Butt’s decision. Butt did not grant the vote, leading to further arguments and yelling between council members.

“You are violating procedure by not moving this motion forward,” McLaughlin said. “You have to move it forward.”

While council member Claudia Jimenez said Butt’s actions equated to a government shutdown, council member Nat Bates requested to end the debate and move to the next agenda item. Stricker added that she believed the mayor is “out of order” and a vote should come forward.

Jimenez then attempted a compromise by saying the council would vote on the first part of the motion if Butt publicly pledged to not cancel the July 27 meeting. Butt declined to make such a pledge but withdrew his earlier comments about canceling the meeting.

Jimenez and McLaughlin ultimately agreed to drop the second part of the motion and solely vote on the first part. The two council members said, if Butt cancels the meeting, it would be a public example of the mayor “totally disrupting the process of good government.” The motion passed 5-2 with council member Eduardo Martinez and Butt voting against it.

“This whole display was an embarrassment to the city of Richmond,” said council member Melvin Willis while giving his vote.

In other news, the council approved a motion to direct staff to draft amendments that would strengthen the city’s ability to enforce the fireworks ordinance.

Additionally, an ordinance will be drafted to deter and prevent automobile sideshows. The motion passed 6-0-1, with Jimenez abstaining. The drafts are due at the end of September with the car sideshow ordinance taking priority.

In a presentation to the council, Police Chief Bisa French said the city had reported 47 sideshow activities, 580 calls of reckless driving and 1,226 fireworks calls in 2021.

Bates, who brought forward the motions, said the entire council has been overwhelmed by phone and email complaints from residents since the start of the year. He called for the “strongest and stiffest penalty as legally possible.”

“It’s a no-brainer we need to get it under control and need to make our community safer,” Bates said.

Several other council members including Jimenez, Martinez, Willis and Demnlus Johnson said the city must be innovative with solutions and not only focus on punishment. Martinez said the sideshows stem from a car culture with people “who are proud of the machines they make.” He suggested creating a city location for the sideshows to occur legally and with spectators.

“If they don’t have an outlet, then we’re basically just saying do it wherever you can,” Martinez said.

Regarding fireworks, Johnson encouraged the city to focus on targeting distributors. He said merely handing out citations to users can potentially lead to the city having many unpaid fines. Johnson also pushed for further education as “the country has been telling people to celebrate with fireworks since 1776.”

“I’m hoping that we aren’t looking to give 12 and 13-year-old kids $3,000 fines and more so looking to find where they purchase those and cutting off that stream,” Johnson said.