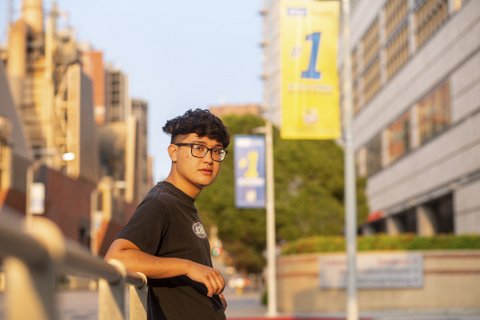 05 Sep Are Young Voters the Key to Gavin Newsom Surviving the Recall?

Alex Valdivia, a junior studying political science at UCLA, became interested in politics during the pandemic and is now policy director at Project Superbloom, a PAC focused on training young people to run for the state Legislature in 2022.

This story was originally published by CalMatters on Aug. 30, 2021.

By Matthew Reagan, CalMatters | Photos by Shae Hammond for CalMatters

Alex Valdivia began paying more attention to politics over the course of the COVID-19 pandemic. As a homebound 17-year-old, Valdivia started logging into Kern County Board of Supervisors meetings to understand how his community became one of California’s largest hubs for oil drilling.

“My neighbor is an oil company where I live, back home in Bakersfield,” he said.

His interest in environmental justice led Valdivia to join the Kern hub of the Sunrise Movement, a progressive organization focused on passing a federal Green New Deal. He’s also a policy director at Project Superbloom, a PAC focused on training young people to run for the state Legislature in 2022. And after turning 18 in July, he’s excited to cast his first-ever vote in the Sept. 14 recall election.

While the ballot has two questions, he plans to follow Gov. Gavin Newsom’s lead: Just vote “no” on removing the governor and skip the second question on replacement candidates — and has been spreading that message to his close friends, parents and grandparents.

“In my circle, I told them all: ‘You know, you gotta get out to vote,’ ” said Valdivia, a junior at UCLA studying political science. “So at least in my circle, they’re gonna vote. We’ve already got our ballots.”

In a recall election that will likely be decided by which side turns out its base at the highest rates, young, energized voters like Valdivia represent an important voting bloc for Newsom if he hopes to survive.

>>>Read: Young Voters Share What It Takes to Get Them Engaged With Local Issues

Newsom and fellow Democrats are counting on turnout numbers similar to the November 2020 presidential election, when 54% of Californians ages 18 to 29 voted, a jump of 17 percentage points from 2016, according to the Center for Information & Research on Civic Learning and Engagement at Tufts University. Young voters, especially those of color, supported Democrat Joe Biden by big margins in decisive swing states.  Analysts attribute some of the rise in youth participation last year to the availability of mail-in ballots making it easier to vote, as well as outreach and education.

Still, the youngest eligible Californians are least likely of any age group to register, or to vote.

In a poll released last week by the progressive advocacy group Courage California, 43% of 18-29 year-olds surveyed said they would vote no on the recall, 26% said they support the recall and 32% said they are undecided. Among likely voters, however, it’s a closer race: 45% support Newsom, 36% back the recall and 19% are unsure.

As of July 16, 13% of the 22 million registered voters in California were 25 or younger.  Aug. 30 was the deadline to register to vote and receive a mail ballot for the recall; there is conditional registration all the way through Election Day, but you have to request a ballot in person.

With 4 million mail ballots returned as of Aug. 31, only 9% of 18- to 34-year-old voters have cast ballots, compared to one-third of seniors, according to Paul Mitchell of Political Data Inc.

“This segment of young voters, with that 40-point Democratic advantage, is going to clearly be the most critical parts of the electorate for the No side to turnout in these last two weeks,” Mitchell said in his report.

Turning out active Democratic-leaning young voters is the top priority of the California Young Democrats, the party’s official youth caucus, which has mainly been messaging around the governor’s handling of the pandemic, plus his record on environmental issues, said president Diane Le.

“Our strategy is not a campaign of convincing new voters to vote. That’s definitely been a strategy in the past for other things, but right now we’re just focused on people who are already registered, have a good track record,” Le said.

She called the youth vote the “margin of victory” in this election: “Even if you know you don’t see a perfect candidate there, you have to think about what’s really important, and that is keeping the governor seat blue.”

Last week, Newsom spoke virtually to California Young Democrats, urging them to help defeat the recall, which he said was inspired by his embrace of California’s diversity.

“I can’t impress upon you the importance of your voice at this critical juncture,” he added.

>>>Read: Here’s Why You Need to Vote in the California Recall Election

The governor also laid out the stark policy contrasts on climate change and the pandemic between himself and GOP front runner Larry Elder. “I’ll just tell you honestly: People say he’s like Trump, he’s to the right of Trump,” Newsom said.

Elder has the endorsement of the California College Republicans, the GOP’s organizing group on university campuses.

“CCR is proud to join the party grassroots in supporting a conservative for Governor. The California College Republicans are proudly socially conservative…We urge the rest of the Party to join us, and we look forward to electing Larry Elder together,” the group said in a press release.

According to communications director Dylan Martin, the group is reaching out to voters through phone banks and door-to-door canvassing, as well as online.

“CCR is one of the most-followed Republican organizations in the state on social media, and we look forward to using it and other outreach methods to change hearts and minds,” Martin said via email. 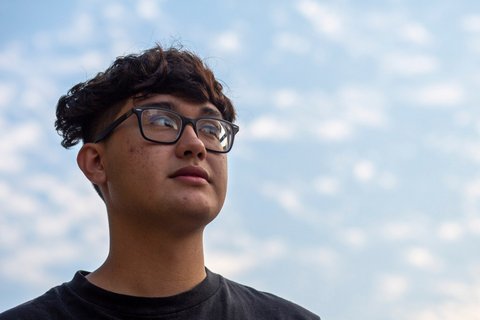 While the political parties focus their attention on registered voters, organizations created to increase youth participation in the 2020 presidential election are now trying to expand the pool of likely young voters in the 2021 recall.

Power CA Action, based in Los Angeles, is focused on outreach to young people of color. Founder Luis Sanchez said over the past two years, his organization has helped to register 70,000 young voters.

He said he’s focused on making sure young voters understand the potential implications of a Republican becoming governor.

“If we get someone like Elder who comes in, or any other Republican that wins the recall, then essentially we’re going to take it not, you know 10 years back,” Sanchez said. “You might go back 30 years.”

He said the recall is reminiscent of his political coming of age in the 1990s, while marching against anti-immigrant measures such as Proposition 187, which was approved by voters in 1994. It banned undocumented immigrants from using public services, but was later found unconstitutional .

“I really feel that, you know, we’ve seen this movie before,” Sanchez said.

While many young people might be politically motivated, more education is necessary to transform them into reliable voters, advocates say.

Liz Calderon, a recent graduate of UC Merced and a youth organizer for Power CA Action in the Central Valley, is urging community members to vote no in the recall election. Calderon said the main questions from voters over the phone and through social media have been about the logistics of the recall, including why the election is happening at all.

Calderon also stresses the need for continued political participation past this one election: “We’ve been here before this election, we have been here during and will be here after. So really the movement, it’s bigger and it’s greater than this one election and we really are working for our communities.”

In addition to general voter education, Sanchez said the timing of the recall election, coinciding with the first few weeks of college and high school semesters, presents a challenge to mobilizing young voters.

For founder Laura Brill and the volunteers at The Civics Center, however, classrooms are their main site to engage and educate young people about the voting process and the importance of registering to vote. The Civics Center, based in Los Angeles, will host its third annual High School Voter Registration week in late September.

Voter registration among young people still lags behind all other age groups in California. In the November 2020 presidential election, 64% of 18- to 24-year-olds were registered to vote, according to a report from the Center for Inclusive Democracy at the University of Southern California. And while the voter turnout among eligible 18- to 24-year-olds rose to 48% in 2020, it was still the lowest of any age group.

“I think part of the education process is helping young people understand that…in order to get politicians to talk to them, they need to be registered so they’re reachable,” Brill said.

Encouraging young voters to register is one of the main responsibilities of 16-year-old Joleen Bakalova, president of California High School Democrats. At her high school in Redlands, Bakalova said awareness of the recall election is low, though some students know it could affect their ability to attend in-person classes if coronavirus cases jump due to a relaxation of vaccine and mask rules, as proposed by the major Republican candidates.

To raise awareness among young voters, the secretary of state and nonpartisan California Forward hosted a webinar last week to go through the voter registration process and provide resources and strategies to encourage others to get registered and vote.

Tamara Rasberry, deputy secretary of state for voter outreach and education, said the most difficult part of running the election has been combating misinformation. She said sharing reliable information is important to ensuring all eligible voters can exercise their rights.

“If you’re 18 years old, a citizen of the United States, you have a vote,” she said. “Don’t let anyone else take that away from you.”