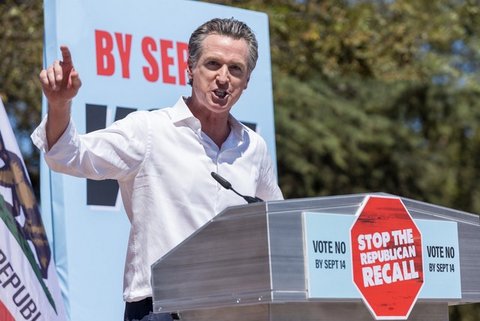 15 Sep After Winning Recall Election, Newsom Says “Let’s Get Back to Work”

Posted at 12:10h in California, Politics by Danielle Parenteau-Decker 0 Comments

It looks like Gov. Gavin Newsom will remain in the office he won in 2018 after he secured an insurmountable lead in votes counted so far in Tuesday’s gubernatorial recall election.

About an hour after thanking Californians for keeping him in office, Newsom tweeted, “Now, let’s get back to work.”

Larry Elder, a conservative Republican Los Angeles-based talk show host, who was the leading candidate vying to remove Newsom from office conceded the race. A total of 46 candidates were on the ballot to replace Newsom.

“Let’s be gracious in defeat,” Elder said after the results started pouring in and it was obvious he had no chance of winning. “We may have lost the battle, but we are going to win the war.”

According to preliminary results, just under 65% of the voters have said “no” to recalling Newsom in the special election that is estimated to have cost California taxpayers $276 million. With about 67 % of all votes counted so far, only a little over 35% voted yes on the recall.

Kevin Mullin (D-San Mateo), Assembly Speaker pro Tem tweeted, “A $276 million waste just to reaffirm 2018’s results with an election coming in 2022. The CA recall process must be reformed including elevating the Lt. Guv in the event of a recall. But to avoid partisan power grabs the Governor/LG should be a ticket of the same party (like NY).”

Lt. Gov. Eleni Kounalakis wrote, “Thank you California for recognizing that @GavinNewsom is exactly where he needs to be, in the Governor’s office! His commitment to the people of California is unwavering and I look forward to his continued leadership of our great state!”

Newsom told supporters, although Californians voted “no” on the recall, he wants to focus on all the things they were saying yes to by their votes.

The gubernatorial recall was the fifth statewide vote Dr. Shirley Weber has overseen since she was appointed Secretary of State on Jan. 19. Throughout the process, Weber, a former assemblymember who represented the 79th District in San Diego County, says she worked hard to make sure that voter fraud or the talk of fraud would not interfere in the results of this election.

“We worked hard to secure our elections. There’s no evidence of fraud or miscounting,” Weber said on CNN. “As Secretary of State, we’ve been evenhanded in how we’ve handled every issue. I was sued by the governor as well as by others because of some of the decisions we made that were fair and just.”

Weber’s office has 30 days to certify the recall election once all of the votes have been counted. If there are any discrepancies, Weber said those issues will be addressed.