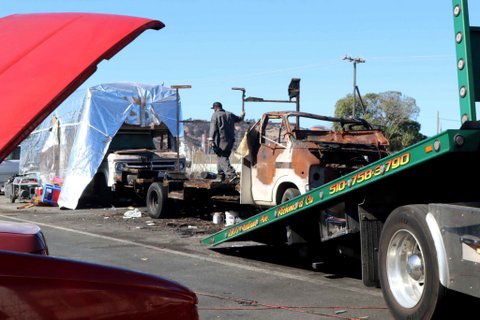 Posted at 07:00h in Uncategorized by Danielle Parenteau-Decker 1 Comment

Reggie Wiggins opened the door to his stepmother’s recreational vehicle in a Richmond encampment in the early hours of Oct. 8 and felt a wave of heat.

Wiggins, who had been staying with his stepmother in an RV at a homeless encampment by the Richmond Parkway, saw a car and an RV on fire nearby.

“Everything was up in flames,” Wiggins, 30, said. “Ash flying up everywhere. It was a scary moment.”

This site, often called the Castro Encampment because of its entrance on Castro Street, has become a focal point for city leaders and local advocates because of fires and other safety issues. The Richmond Fire Department recorded 14 fires there between Sept. 1 and Oct. 15.

Advocates with Safe Organized Spaces Richmond worked with encampment residents and fire Marshal Eric Govan to remove fire hazards later on Oct. 8. Someone from the Code Enforcement Division visits this encampment and the one on Rydin Road regularly to discuss safety issues person to person, Govan said.

City staff towed nine vehicles from the Castro encampment between Oct. 6 and 8 for creating hazards, such as blocking fire truck routes, or after having caught fire already. Three vehicles, two of which were burned, were removed Oct. 8.

SOS! Richmond has provided waste removal services there since March 2020, according to director Daniel Barth. Everything removed from the encampment was done with either owners’ consent or the consensus of those living nearby. Among the items hauled away were an abandoned car, debris from a burnt RV and a pile of rubber that was stripped of copper wire.

“The point is to mitigate the possibility of fire occurring, so anything that’s flammable is removed,” Barth said. 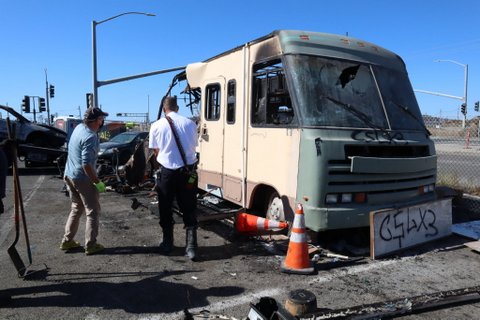 Renee Castillo and her family have lived at the Castro Encampment for about a year. When they arrived in November, Castillo said there were much fewer people and they looked out for each other.

“Now it’s just full of people,” she said, “Hard to look out for each other.”

The encampment’s growth also has made it harder to be safe. She saw the car and RV burning on Oct. 8. Concerned about fire, Castillo keeps two extinguishers in her RV.

Earlier this year, the Richmond City Council discussed opening a safe RV parking location that also would have sanitation. After pushback from community members, though, the council appointed a commission to research how best to provide support to Richmond’s unhoused population. The city also has been looking at what resources and partnerships are available from the state and county to address the need.

Council member Claudia Jiménez said the council wants to be compassionate and find a solution that addresses all the concerns.

“The problem is that the solutions that we have are really minimal,” she said. “There is not a big menu. It’s just like a really small menu of what solutions there are.”

In the meantime, she said, it’s important to ensure safety at the encampments.

Wiggins pitched in to help SOS! Richmond on Oct 8, moving debris into piles. He said he was tired of all the fires and helps where he can to maintain the encampment’s safety.

“I believe it’s helpful,” Wiggins said. “People have their kids down here. … My younger siblings are down here. People I know are down here. That’s something on your mind all the time.”

This story was originally published Nov. 2, 2021, by Richmond Confidential. It has been reproduced with permission.