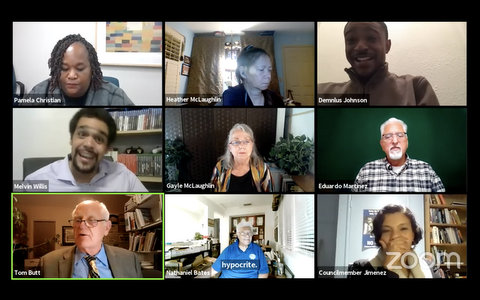 Nearly a week after announcing the resignation of City Attorney Teresa Stricker in his newsletter, Mayor Tom Butt publicly disclosed that the council voted to terminate City Manager Laura Snideman.

The news followed a series of other closed session items divulged by Butt at Tuesday’s City Council meeting. Despite objections from Stricker over potential Brown Act violations, Butt revealed an approved severance package with Snideman and a motion to receive a second opinion from an attorney on the ongoing Point Molate Brown Act ligation.

The council approved its separation agreement with Snideman at the Nov. 2 closed session meeting, according to Butt. Per the agreement, the council also consented to adopt a resolution that condemned Butt’s e-forum’s statements about the city manager’s performance. The vote was 5-1-1 with Council member Eduardo Martinez abstaining and the mayor voting against, Butt said. The Point Molate litigation vote was 4-3 with Butt, Vice Mayor Demnulus Johnson and Council member Nat Bates voting against.

Neither Stricker nor other council members disputed Butt’s comments at the meeting. However, before the closed session announcements, Stricker warned Butt of possible Brown Act violations. She said the act requires certain types of closed session items to be publicly reported, but items not required can only be reported if the council majority decides to do so. Typically, the Richmond city attorney provides closed session reports at meetings.

“You either have to do it or can’t do it absent of the majority vote, so I’m going to caution you,” Stricker said.

Butt argued the Brown Act states local agencies should publicly report any action taken in closed sessions and the vote of every member present. He also said the council has improperly kept “lots of decisions secret” from the public in the past. In response to Butt’s allegedly inappropriate statements, Council member Claudia Jimenez said the mayor ignored the city attorney’s advice and solely commented for “political reasons.”

“You guys are welcome to visit me in jail,” Butt sarcastically replied to Jimenez. “You’re breaking my heart.”

Following Butt’s retort, the council voted 5-2 to approve a resolution condemning statements made in Butt’s newsletter about the city manager’s job performance. Butt and Bates voted against the motion.

Assistant City Attorney Heather McLaughlin, who authored the resolution, cited the importance of the city and council separating itself from the mayor’s e-forum opinions. Multiple council members concurred with McLaughlin. Johnson said the item was specifically aimed at “protecting the city of Richmond” and not attacking the mayor. Jimenez called the resolution a message to city staff that the council will not allow for abuse of power by the “lead person in the community.”

“It’s not an attack on one person,” Jimenez said. “It’s about us as an institution, to avoid more disruption and protect the people who are doing the work to serve our community.”

Bates’ displeasure for the resolution stemmed from what he viewed as an attack on First Amendment rights. He said individuals, particularly political officials, have the prerogative to voice opinions. He also said the continued animosity among the council may hinder the city’s recruiting. As of Oct. 26, Richmond had 105 vacancies. The police department accounted for 31 of the vacancies.

“Who’s going to want to come to a city that’s in disarray and fighting among themselves…We’re becoming the laughingstock of the damn Bay Area,” Bates said. “I don’t understand how this council continues to find a reason to start attacking. I wish we would stop and start working. The voters put us in office to work together to solve problems.”

Litigation Against the Mayor

In what she deemed a reportable closed session action, Stricker announced the council directed staff to bring forward a resolution for consideration against Butt at a future meeting. The resolution would censor the mayor for improperly disclosing confidential attorney client-privilege and refer the matter to a grand jury and district attorney. The motion was approved 5-1 with Bates voting no, and Butt recused from the item. Although not stated on the agenda, Butt said this item referred to the council considering litigation against him. No other information was given on this item.