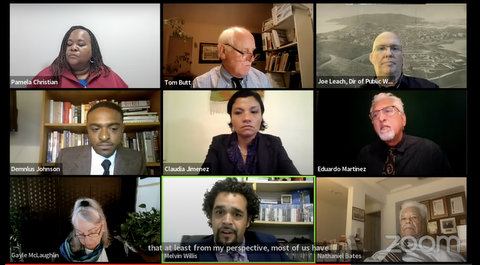 The Richmond City Council considered a motion brought forward by council member Melvin Willis that would reintroduce ticketing cars that have not been moved from designated areas during scheduled street sweeping.

While street sweeping has continued during the COVID-19 pandemic, cars have not been ticketed for violations when these sweeps have happened.

“It’s safe to say that, at least from my perspective, most of us have gotten into the swing of navigating our day-to-day lives despite the pandemic,” Willis said. “Just hearing the community concerns about moving our cars once a month just to help keep the streets clean, it’s hard for me to argue against that.”

Richmond residents would be given a 90-day notice before street-sweeping enforcement starts again.

The City Council discussed how this policy would affect neighborhoods that are against putting signage up.

“The original plan was that they would put signs up in every neighborhood that notified people when the street sweepers came through, and if they didn’t move their cars, they would be ticketed or fined,” Mayor Tom Butt said. “There were certain neighborhoods who protested, and they said they didn’t want signs.”

During the public comment section of this motion, a handful of members of the community said that all residential neighborhoods should have signage to allow for citations, and street sweeping policies should be equally applied.

Richmond resident Naomi Williams said having actual physical signs would be helpful instead of having digital alternatives due to not everyone having equal access to technology.

“I know I have people in my neighborhood that don’t have iPhones and they don’t want them,” Williams said. “So go ahead on and put the signs up, so the streets can start being swept.”

Acting Richmond Police Chief Louie Tirona said his department would need to give training on the citation process in the street sweeping process. He said this was possible to do in 90 days but wanted more guidance from the staff.

“We currently have one full-time parking enforcement officer working, and he has not had the experience of enforcing the street sweeping efforts,” Tirona said.

The council ended up adopting a different proposal introduced by council member Nathaniel Bates that would ask the staff to look into a feasible timeline to reinstate the citation process and other recommendations for street sweeping policies. Council member Gayle McLaughlin abstained on this measure.

In November 2020, residents of Richmond voted to approve Measure U, with 73% voting in favor of it. According to Richmond Confidential, under Measure U, “businesses would instead pay a tax based on a percentage of their gross receipts — their total annual revenue.”

Measure U was discussed after budget presentations were given by the city’s internal services department.

“So far, 34% of the businesses have paid their Measure U tax bill, and 51% of the mid-year budget that was estimated has been collected,” city manager Shasa Curl said.

Council member Nathaniel Bates raised concerns that some car dealerships he has corresponded with are frustrated with this measure.

“Now if these companies start relocating, it’s going to be a dramatic reduction in the revenue and also the employment, so it’s not just the dealerships that we’re looking at,” Bates said.

A handful of members of the community joined Bates with their concerns that this measure may lead to some businesses leaving Richmond. As some members of the council, staff and public pointed out, Measure U had already passed with large community support.

“This Measure U passed with a 72% for yes, that is everyone at the table, that is the community speaking out,” Richmond resident Jamin Pursell said. “We should be looking at what this is going to be able to do for the city itself, and that those businesses will want a better city.”

The next city council meeting will be held April 26.